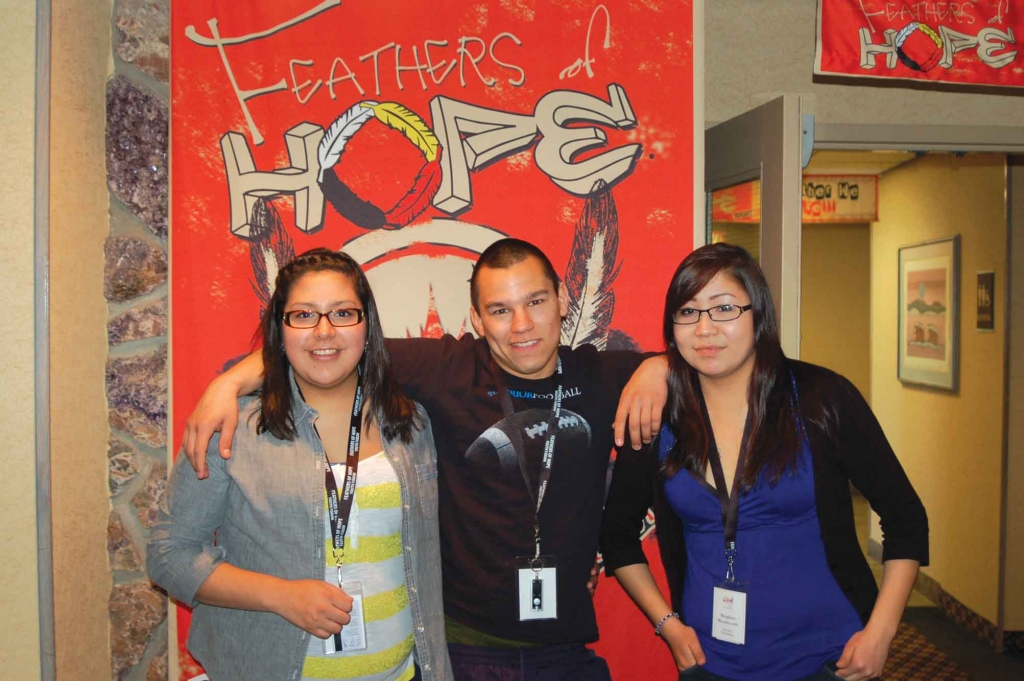 More than 500 First Nations youth aged 18-35 from across the country attended the Assembly of First Nations’ (AFN) 4th youth summit from Nov.18-21 in Saskatoon to develop a five-year action plan for change and progress to address their priorities.
Among them were members of the Thunder Bay-based youth group Feathers of Hope (FOH), who were invited by AFN to attend this year’s summit.
“We were asked to speak by the AFN Youth Council. We were invited to the conference just to speak about Feathers of Hope, about what we have done so far and where we are going,” said Uko Abara, one of FOH’s youth amplifiers.
Kathryn Morris, another amplifier from FOH, said that she was happy for FOH to have the opportunity to speak at the AFN youth summit.
“Our goal is to spread the word on Feathers of Hope and that was a good way to do it,” Morris said.
The three-day summit held workshops and panel discussions on priority issues directed by youth.
FOH held three workshops a day, with an increasing amount of attendees with each new workshop.
“When we were there, we talked about what the (FOH) forum is and we talked about the different things that comprised it,” Abara said. “It’s not only a forum but a youth-led initiative, and there is also the action plan.”
FOH held a forum last spring with youth from across northern Ontario to discuss key issues affecting the youth and their communities, and have been working on an action plan and a report from the forum.
Abara said that they wanted to encourage the youth at the summit to take charge of FOH, and that they talked of the benefits that the forum held in the spring had for the youth.
“So if you want to take a first step towards making change where you are, Feathers of Hope is a way,” Abara said.
The feedback FOH received after each workshop was very positive, said Morris.
“At the end of each of our presentations or workshops, we had numerous requests to visit different communities across Canada,” Morris said. She said that a lot of the questions had to do with how to get something like FOH started in home communities.
“There was a lot of interest in what we were talking about,” Abara said of the feedback after the workshops.
AFN National Youth Co-Chair Noel Joe said, “First Nations youth are the fastest growing demographic in Canada and need to be meaningfully included in shaping the way forward on all areas that affect our lives and the futures of our nations.”
“It was really good to see how these young people (at the summit) are really active and more knowledgeable about what’s going on in their communities and within Canada,” Morris said.
“For me, it was a good experience to see that there are a lot of youth leaders across Canada within the communities,” Abara said. “It was nice to see these leaders are connecting with each other and empowering each other.”
Abara said that the issues and experiences that affect First Nations in northern Ontario are also experienced by other First Nations youth across Canada.
“The issues are alive and well, but it’s good to see the youth are taking the time and initiative to solve these problems,” Abara added.
National Chief Shawn Atleo, who addressed the summit on the first day, said that the young people are not just the leaders of tomorrow, “they are our leaders right now.”
“We look forward to working with the National Youth Council and all our youth in ensuring their plans and priorities are integrated into our national action plans and strategy,” Atleo said. “We will move forward stronger, together.”
The five-year action plan from the summit will be released in early 2014 and will be incorporated into the AFN national agenda.
Morris said that the FOH action plan and report from the spring forum would be released early in the New Year.
“I just want to repeat that one of our main goals going to the summit was to spread the word about Feathers of Hope and allow youth to take charge about that process to solve and address issues in their communities and in their own lives,” Abara said.
“We hope they can interact with the resources they have, whether its with their own provincial advocate’s office, the band offices, and with each other, we are hoping that the youth can take the idea of FOH and implement it within their own communities and work towards the change they want to see.”
AFN National Youth Council Co-Chair Sasha Maracle said having these national youth summits is important for youth to meet up and discuss their issues.
“Youth from all of our territories came together to discuss important priorities in their lives and for the future, such as education, economic development, health, treaties, and supporting our cultures and languages,” Maracle said in a media release. “We are building a plan to move these priorities forward, led by youth and supported by leadership.”
Updates and information about Feathers of Hope can be found at facebook.com/FOHTbay or on Twitter at @FOHTbay