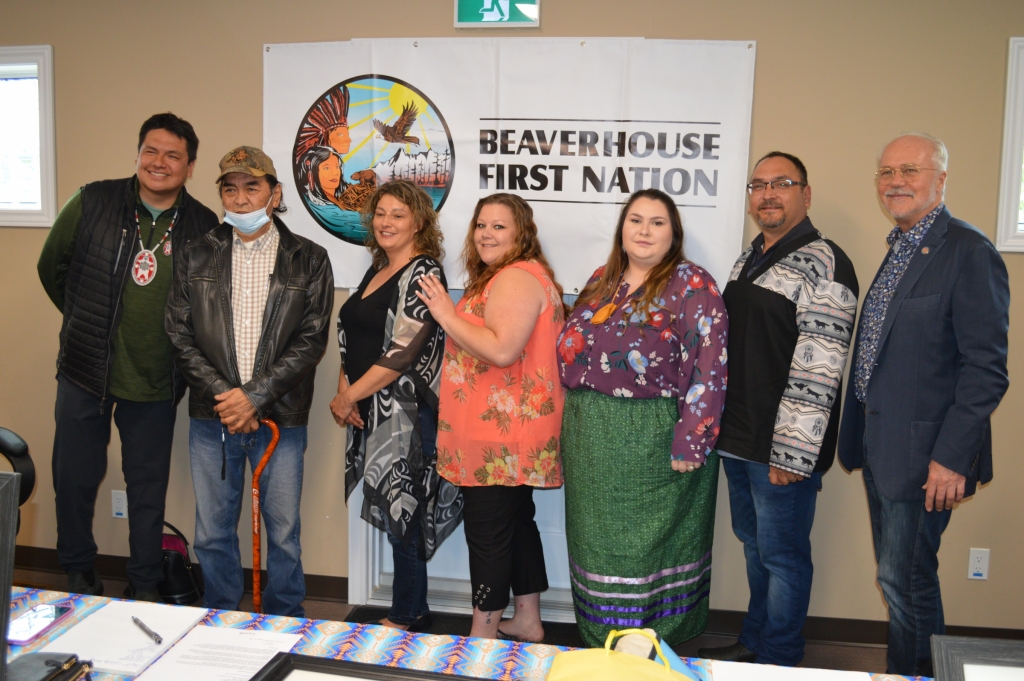 “It’s been a whirlwind of emotions for all of us in the community. I have been involved in this fight for most of my life alongside many of our past leaders such as the late Chief Roy Meaniss, who was a long time advocate for the community. It’s been an honour to carry on his legacy and to work with our community to achieve this goal,” said Chief Wayne Wabie.

The event was led with a prayer and ceremony by Chief Wabie, along with messages of support by his father and community Elder Tom Wabie.

The legal process for recognition was started by the late Chief Roy Meaniss in the 1980s. Successive Beaverhouse FN Chiefs who continued the process were Chief Gloria McKenzie and Chief Sally Susan Mathias Martel (Marcia Brown-Martel). The community and its leaders had fought for recognition for the past three decades with the major support and expertise of Nishnawbe-Aski Nation (NAN), the regional political organization that represents First Nations in the Treaty #9 area. Beaverhouse FN as a citizen of Wabun Tribal Council also had support of Wabun.

“This is a very emotional and proud moment for the people of Beaverhouse First Nation. To have this recognition from the government, from your partners within NAN, from townships and from neighbouring communities means that it is a powerful foundation to build upon. We will be there to support Beaverhouse First Nation and help their nation continue to grow. I am extremely happy to be here with the community today,” said Grand Chief Derek Fox, Nishnawbe-Aski Nation in speaking to event participants.

The lead legal representative for Beaverhouse FN, Kim Fullerton was instrumental in representing the First Nation over the years. He is a long time advocate for First Nation communities and organizations primarily in land claims against Canada and Ontario.

“This is a very significant event because Canada is recognizing a new First Nation in the country, which does not happen very often. This is a very proud day for all of us, the community citizens, their leaders and Nishnawbe-Aski Nation who supported the First Nation. It’s been a long time coming and it is very satisfying to be able to assist this wonderful group of people,” said Fullerton.

His wife Christine Dernoi, was one of the key researchers that worked with Beaverhouse FN and NAN to prepare the legal case with the government. Luke Hunter, Director of Governance, Treaty Implementation for NAN was also instrumental in advocating for and assisting Beaverhouse FN leadership in this process over many years.

First Nation recognition for Beaverhouse FN is the first step in starting the process of creating a new relationship with government. The community leadership and its citizens will now take the time to plan for the future direction of the First Nation and negotiate with federal and provincial governments. The federal government has appointed a federal negotiator to start discussions on this process with a meeting planned for June.

The lack of official First Nation recognition by the government in the past meant a lot of difficulty for the First Nation leadership in establishing, developing and maintaining social, health, education and administrative activities for its citizens.

Chief Wabie gave thanks to the community citizens, Elders and past leaders who supported the efforts and provided the information, research, historical documentation and input critical in establishing the record of their people’s history.

“This is a very emotional event for all of us as it makes me realize what is next for our community. This new stage of development will bring healing not just in body, but in mind and spirit and as a whole for all our families,” said Councillor Brianna Moore.

First Nation leadership is now hopeful for positive future growth for the community.

“This is going to change Beaverhouse First Nation because nobody can say that we are not a First Nation any more. There is lots of work to be done but I have full faith in our community that we are going to do great things,” said
Councillor Kayla Batisse.

Councillor Rob Meaniss joined the event via live stream along with other officials and community participants who were not able to attend in person.

“It feels great to be here today. We are a strong community that has managed to hang on to our language and our history through our Elders. Now we will be able to move forward with our youth to build our community and make us stronger,” said Councillor Diane Meaniss.