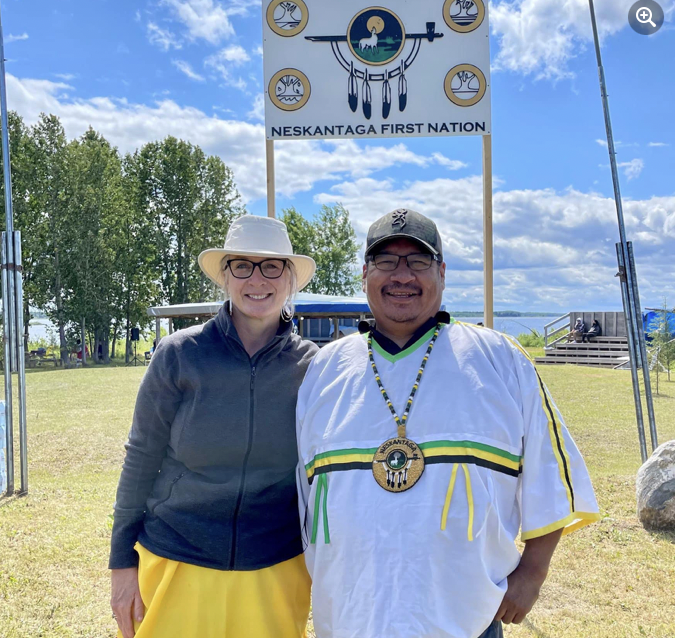 Thunder Bay-Superior North MP Patty Hajdu recently announced $6.6 million in funding for teacherages in Neskantaga and $525,000 in funding for menstrual products in the Yukon in late July. Hajdu attended Neskantaga’s annual powwow and toured its new water infrastructure and old community site on July 23 and attended the Tr’ondëk Hwëch’in people’s Moosehide Gathering, held July 28-31, near Dawson City during her trip to the Yukon.

“Neskantaga First Nation appreciates the opportunity that (Indigenous Services Canada) Minister Patty Hajdu took to speak directly with (citizens) of our nation, who endure not only many states of emergency but a continuing water crisis affecting their human rights,” says Neskantaga Chief Wayne Moonias. “We are certain that her visit on Saturday will deeply inform the choices Canada makes regarding our community as we move forward together on a path towards healing and wellness after the traumas brought on to us by 10,000 days and counting of living without clean, safe drinking water.”

Hajdu announced the $6.6 million in funding to support an eight-unit housing complex for teachers and visiting professionals, which will free up six housing units in the community for citizens to use during her visit to Neskantaga. The federal government will also be supporting Neskantaga to fund two navigator positions to help citizens address trauma caused by the long-term water crisis.

“Neskantaga First Nation has experienced many generations of trauma,” Hajdu says. “On top of the relocations of the community, and assaults on their self determination, most community (citizens) have never lived with access to clean drinking water. The new water treatment plant is in place, but there is still more work to do to ensure the residents of Neskantaga have a consistent and trustworthy supply of clean water. Training water operators, testing the plant and improving water supply are all important to help people trust the water coming from the taps. I look forward to working with Chief Moonias to support Neskantaga (citizens) build a stronger and healthier future.”

Hajdu announced the $525,000 in 2022–23 funding for the Council of Yukon First Nations to ensure menstrual equity for all Yukon First Nations women, girls and 2SLGBTQQIA+ peoples. The funding is part of $2.5 million committed to increase access to menstrual products for First Nations and Inuit students across the territories and in Inuit Nunangat.

“Too many people can't attend school because they don't have access to menstrual products — but we can change that to make sure everyone has a fair chance to succeed,” Hajdu says. “With $500,000 from Indigenous Services Canada, we can help Indigenous girls, women and LGBTQ2SIAA+ people access menstrual products when they need them. Thank you to the Council of Yukon First Nations for their leadership, and the Yukon government for their support. I know our work together will restore dignity and choice to so many.”

Hajdu says she had never travelled to the Yukon before, noting the forests and access to natural resources reminded her of northern Ontario.

“It was really important for me to see the territory, to visit with the Council of Yukon Indigenous People and to meet with some of the Indigenous rural communities to get a sense of what their priorities are and what kind of things they are working on,” Hajdu says. “Just like northern Ontario, many of the people I met with talked about the impact of climate change on some of their traditional and longstanding practices, including access to natural foods.”

Hajdu says she visited the Tr’ondëk Hwëch’in people’s Moosehide Gathering, held July 28-31, near Dawson City during her trip to the Yukon.

“I was told by the chief that this was the very first time that a formal meeting between the government of Canada and the Hwëch’in people had been held at the Moosehide location,” Hajdu says. “So it was a real honour for me to be there to meet with this community and to talk about their priorities, but in an location that held such significance to them.”