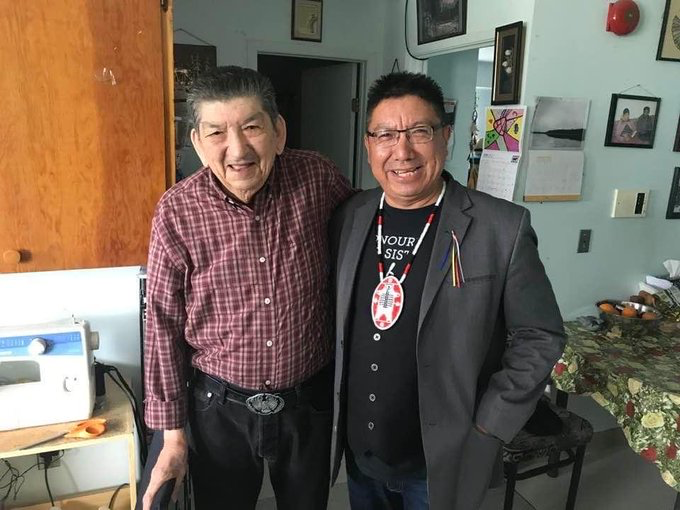 The late Wunnumin Lake Elder Chris Cromarty was honoured for his achievements as one of the founders of Grand Council Treaty No. 9 by Nishnawbe Aski Nation after his passing on June 9. Photo from Alvin Fiddler tweet.

The late Wunnumin Lake Elder Chris Cromarty was honoured for his achievements as one of the founders of Grand Council Treaty No. 9 by Nishnawbe Aski Nation (NAN) on June 10. Cromarty passed on June 9 at the Sioux Lookout Meno Ya Win Health Centre.

“Chris was the founding vice-president of Grand Council Treaty No. 9,” says Grand Chief Derek Fox. “He was part of a delegation that asserted the Declaration of NAN to the federal government in 1977. Chris, like all the leaders at the time, they just believed in preserving our traditional practices and of course were concerned with our young people losing touch with their culture.”

Fox adds that Cromarty wanted to ensure that the people of NAN did not lose their way.

“I know he wanted us to fight for that language, to get it back, assert it and bring it back into our schools,” Fox says. “That might be one of the ways we can honour him is to start fighting for those things that the government took from us. We need to find a way as leaders to get that language back, start by understanding it, encourage our leaders to learn to understand it and then speak it. I think Chris would really like that.”

“We are very saddened to learn of Chris’s passing and our love and prayers are with his dear wife Annie, his family and his home community of Wunnumin Lake First Nation,” Fox says. “Most NAN First Nations didn’t have electricity, airstrips or running water when leaders like Chris Cromarty established Grand Council Treaty No. 9 to improve the lives of our citizens. Our nations have come a long way since then, but the work we continue to do for our people was built on (the) vision that founders had for Nishnawbe Aski Nation.”

Cromarty was also an integral part of the 1997 Four Party Hospital Services Agreement that united two hospitals in Sioux Lookout into one regional hospital, which eventually became the Sioux Lookout Meno Ya Win Health Centre. He served as the inaugural chair of the SLFNHA board of directors and worked in health until his retirement. He had also managed the Big Trout Lake Co-op and later the Mistik store in Wunnumin Lake.

“As a leader Chris believed in preserving traditional practices and was concerned with young people losing touch with their language, culture and spirituality,” Fox says. “He often spoke about seeing positive change in young people as they returned to traditional teachings. He once commented that (the) world changed in the 1960s with the growing recognition of Indigenous traditions and culture as people were joining together to share their values and the things they treasure. We are seeing more of this today, with Indigenous rights, culture and identity increasingly being recognized and celebrated.”

Cromarty was awarded the Sioux Lookout Meno Ya Win Health Centre’s inaugural Chris Cromarty Excellence in Leadership Award in 2007 for his tremendous contributions to improving health care in the Sioux Lookout area, and NAN honoured him with a lifetime achievement award in 2012.

“Chris was an inspiration to us all, and we cherish his life of leadership and friendship,” Fox says. “Many of us have grown up with a strong sense of pride and confidence thanks to leaders like him who have guided us along the way.”