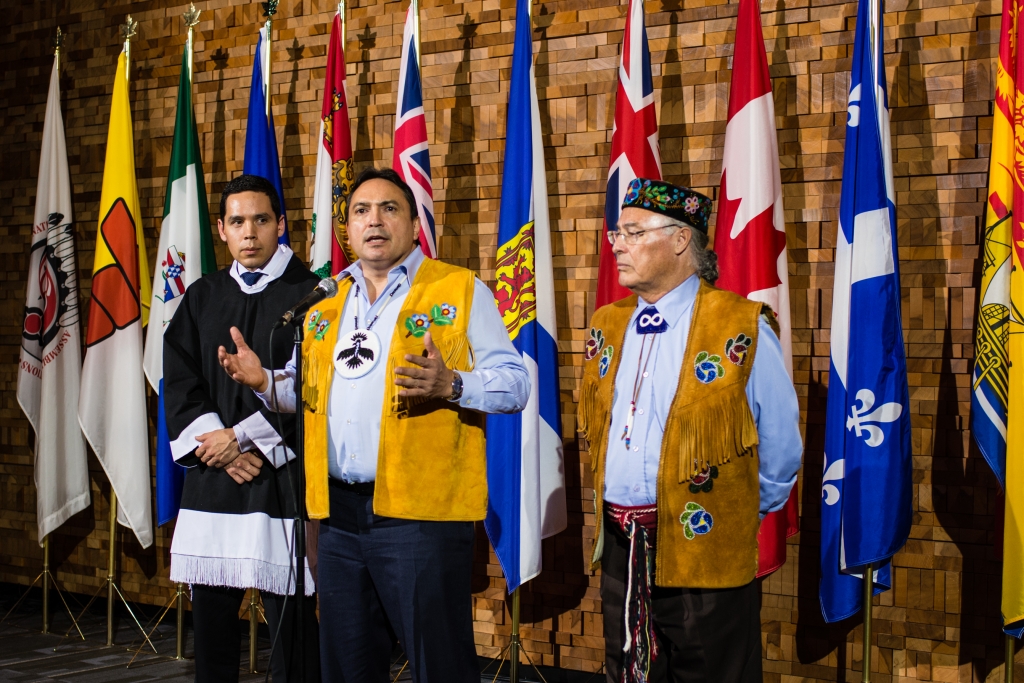 At least one indigenous leader stormed out of a premier's meeting with Prime Minister Justin Trudeau, calling the reunion a "shamble" and a "failure."

Chief Allan Adam from Alberta wasn’t the only one who felt this way.

Grand Chief Alvin Fiddler of Nishnawbe-Aski Nation said there was overall disappointment because there was an expectation that at least the National Chief would be a part of the first ministers meeting the next day.

“Canada’s Indigenous peoples have a sacred relationship with the Earth. Their unique perspective will help guide us in developing policies that ensure our land, air and water are protected for future generations,” Trudeau said.

“Building off the discussions with Indigenous leaders, the First Ministers’ Meeting will focus on developing a pan-Canadian framework to grow our economy while also reducing emissions,” said a statement from the prime minister.

In the days leading up to the highly anticipated meeting, indigenous leaders in Ontario, Manitoba and B.C. issued statements that outlined their expectations, which posed the question of whether Trudeau’s campaign and election promise of renewing a true nation-to-nation relationship would come to fruition.

“Without a clear relationship, the Pan-Canadian Climate Change strategy is doomed to fail,” said a statement from Ontario Regional Chief Isadore Day the day before the meeting.

“We are the first ones to feel the adverse effects which impact on every single aspect of our daily life, from lack of winter roads to warmer seasons that disrupt access to fish and wildlife,” said Day.

“Given previous statements about the need to utilize indigenous knowledge and addressing this issue were not a part of the first ministers meeting was obviously disappointing and it felt, for some of us, that it was just a side meeting,” said Fiddler.

Coming out of the Paris climate talks last December, the prime minister said he was committed to working with indigenous leaders and that he would reconvene with the first ministers within 90 days as part of his efforts to do more to address the global challenge of climate change.

“Along with the provinces and territories, we will work with a wide array of stakeholders – and all Canadians – to reduce greenhouse gas emissions, including through carbon pricing.”

Perry Bellegarde, National Chief of the AFN attended the COP21, also called the Paris Climate Conference, last year and said the meeting with the prime minister and first ministers was a start.

“This is the first time ever that indigenous peoples have been referenced in an international treaty agreement,” Bellegarde said after the meeting.

He said there was no huge discussion on carbon tax or credits because it was a two-hour meeting.

“Canada will be spending tens of billions of dollars in order to meet the COP21 commitment of reducing greenhouse gases by 30 per cent within 15 years. We need to ensure that First Nations are not an after-thought in decisions coming from First Ministers. We must be represented at the table tomorrow,” said Day.

For leaders like Day, this means full inclusion and specifically, a seat at the first ministers meeting.

“It was an emphatic no,” Day said of the response they received in the meeting with Trudeau and first ministers.

He said it’s problematic if they are not afforded the opportunity to participate in a nation-to-nation relationship especially on an issue as serious as climate change.

“If a pan-Canadian strategy is going to work it has to include the rights and title holders of this land, the First Nations people of Canada.”

Bellegarde agreed, saying it was all about rights and title.

Day said the meeting was in no way a decision making process and not “true consultation”.

Sheila North-Wilson, Grand Chief of Manitoba Keewatinowi Okimakanak (MKO) said each of the three leaders sitting with the prime minister spoke for about 10 minutes on the importance of protecting the climate and the impact it has on their communities. She added they seemed to have the support of all the premiers at the table.

“Every single one of them acknowledged the importance of building that indigenous relationship and creating that nation-to-nation government, so [Trudeau] heard it from all sides that it’s important to do that,” said North-Wilson.

She said the prime minister made no commitment to follow-up with any in-depth discussions despite a push to do so from the indigenous leaders at table.

“There was a lot of disappointment. I think there was that real opportunity for the prime minister to really make commitments again to our indigenous people.”

“Our indigenous leaders and people need to respected and given space to share our concerns,” North-Wilson added.

Fiddler of Nishnawbe-Aski Nation said he went to Vancouver to express the urgency of the situation in NAN to both the AFN and the first ministers.

“In the NAN territory, thirty-two of our communities are remote and isolated, relying on the winter road and with the change in climate and the instability of the thickness of the ice that we need to build these roads, that’s becoming more and more of a concern so I think that there’s some real pressing issues that we’re seeing in our communities now that we need to convey.”

Fiddler said he also gave Trudeau a copy of the NAN health declaration issued by NAN chiefs a week ago.

“I gave him a copy of that and asked him to instruct his health minister to reach out to NAN and plan for a meeting as soon as possible.”

The outcome of the first ministers meeting includes four working groups that will be responsible for making recommendations to the first ministers in the areas of:
• clean technology, innovation, and jobs;
• carbon pricing mechanisms adapted to each province's and territory's specific circumstances and in particular the realities of Canada's Indigenous peoples and Arctic and sub-Arctic regions;
• specific mitigation opportunities; and,
• adaptation and climate resilience.

Fiddler hopes Trudeau will ensure there is indigenous leadership represented on those four working groups who have an October 2016 deadline to submit reports to the first ministers.

Day said that the silver lining is working with a premiere whom he called “a champion of women rights” for extending her efforts to deal with issues around missing and murdered indigenous women and girls and issues around inclusion.

“We’re going to work directly with the premiere because in Ontario its going to boil down to lands and resources and issues like cap and trade and climate change policy that will affect the people in our communities.”