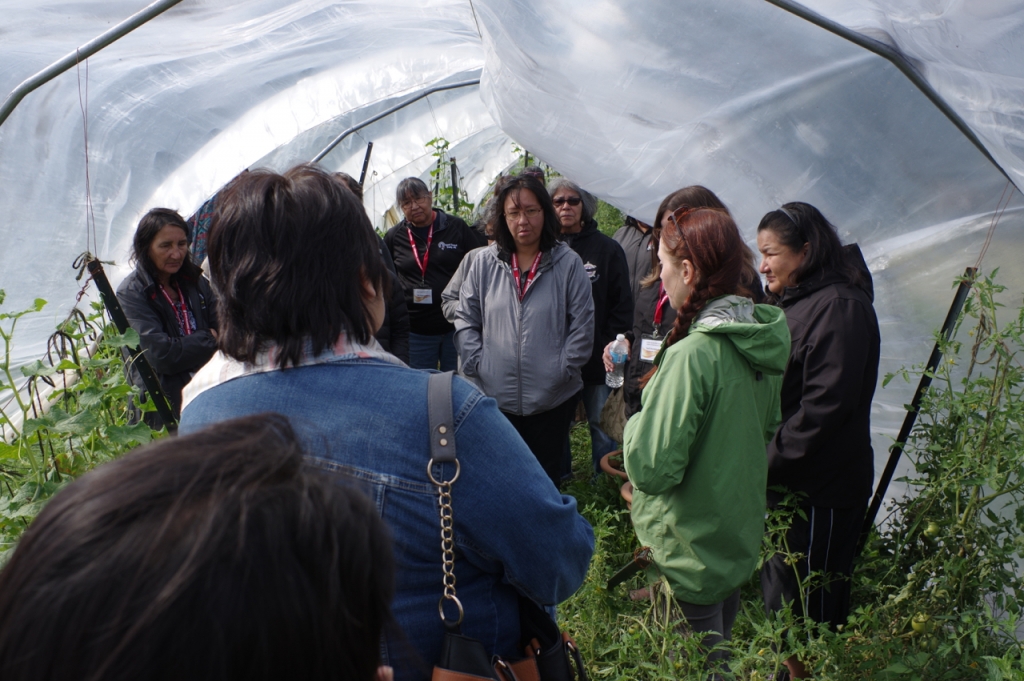 Local food production was the focus of the first day of the 9th Nishnawbe Aski Nation Food Symposium at three garden sites in Thunder Bay and Fort William.

“It’s amazing — everything is beneficial for the First Nations, especially up north,” says Matachewan Chief Alex Batisse on the first day of the Aug. 22-24 food symposium. “It’s a high cost to get food in there, so this would be really beneficial for them.”

“I enjoy it,” Batisse says. “It’s (good) to see the commitment behind doing these (food symposiums) and the benefits that are going to help the First Nations as well.”

“Roots to Harvest has a really innovative garden over by Volunteer Pool where they’re not only gardening, but they have bees and rabbits,” says Wendy Trylinski, NAN’s director of public health education. “So they are trying to look at a sustainable holistic system.”

“We hope to replicate (the greenhouse) in one of the NAN communities, so we’re very excited about that,” Trylinski says, noting that the greenhouse is made from shipping containers. “So we’re hoping we can get that greenhouse out to a northern community by late fall. They’ve got the foundation built, so they’re hoping that the whole structure should be ready by the end of September.”

Trylinski adds that youth account for about half of the participants in the food symposium this year.

“What we’ve seen today was some of the youth that are working with Roots to Harvest are very knowledgeable and very eager to share what they’ve learned,” Trylinski says. “So it’s going to be a nice blend of community members and youth and just continuing that sharing that we’ve been doing over the last nine years.”

Ruth Stevens, a participant from Eagle Lake, also noted how active the youth were in the Roots to Harvest garden projects.

“We already have a community garden going that we’ve had for the last few years, but if I could take some of this (information) back to the youth, they might get as enthused as I am,” Steven says.

Charles Megan, a participant from Aroland, appreciated the opportunity to see the watering and composting systems employed at the Roots to Harvest gardens.

“Maybe that (watering system) can be better used by us (in Aroland),” Megan says. “And learning that you can use some of the older (plants) for compost is really interesting.”

Angela Towedo, a participant from Aroland, enjoyed seeing how everything works together in the Roots to Harvest gardens.

“The bees help the flowering,” Towedo says. “I love that they are raising animals here because you get to learn about the life cycles of the animals and the plants. I love their garden.”

In addition to the garden tours in Thunder Bay and Fort William, the food symposium also includes a variety of workshops, including Smoking Cessation, Wild Rice, Traditional Foods and Diabetes, Sour Dough Making and other healthy breads and Aroland First Nation School Garden, at the Quetico Park Learning Centre in Atikokan on Aug. 23 and 24. Presentations on the NAN Food Strategy, TIDES Canada/Manitoba First Nations Food Initiatives and Gut Health are also scheduled, as are a Special Recognition for Simon Frogg and the Food Champion Awards.