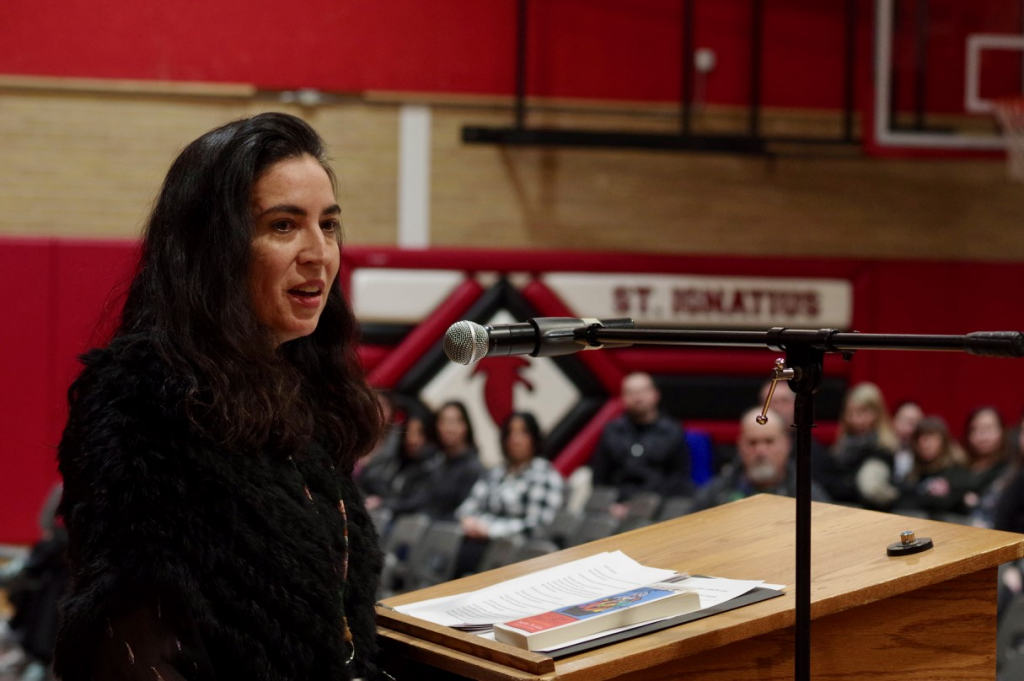 “I do not know much about the intricacies of our changing climate, our suffering Aki or Earth, I don’t know very much about water management, how come some water is clean and other water is so polluted, but I do know what I hear and what I experience and that I have been gifted with stories from communities, from people who have entrusted their stories with me,” Talaga says. “I’m going to talk to you about water, about nibi, using the lens that I see it through — that access to clean drinking water is a basic human right, one that all people deserve to have, particularly those who have signed treaties with the government of Canada, the Crown, with the province of Ontario, treaties that are legal documents, nation-to-nation agreements, that should be upheld not ignored.”

“It’s a story of the might and arrogance of colonization combined with the absolute disregard for those living on the land,” Talaga says. “It is a story about honesty, of getting the governments of the City of Winnipeg, the province of Ontario and the country of Canada to own up to the ongoing thievery of a precious national resource — water.”

Talaga says the aqueduct from Shoal Lake to Winnipeg was built from 1913-1919 over pristine land, including manomin (wild rice) beds and ancient burial grounds.

“And that aqueduct has been taking water out of Shoal Lake and putting it into the taps for the people of Winnipeg ever since,” Talaga says, noting that she visited Iskatewizaagegan Chief Gerald Lewis in 2020. “Chief Lewis explained to me that the Anishinabe have always used the waters of Shoal Lake and the surrounding lands for survival, for trade. The waters provided so much fish, sturgeon, blueberries, (manomin) but now the community which sits on the northwest corner of the lake has been left without the economic tools it needs to survive.”

Talaga says the aqueduct to Winnipeg draws more than 220 million litres of water from Shoal Lake every day.

“All this has been done with no thought to what draining the waters of the area mean, the flooding, the canal, the dike and how it impacts surrounding shorelines,” Talaga says. “For two decades Shoal Lake #40 didn’t even have access to clean drinking water. People in (Iskatewizaagegan) have seen land taken and their cultural practices completely altered, (manomin) beds destroyed, entire ecosystems threatened by the aqueduct.”

Talaga says Iskatewizaagegan also has a spiritual connection to Shoal Lake and the lands that surround it.

“It is a sacred trust,” Talaga says. “Under our laws they are to protect and keep safe the area for the next generations, yet Ontario has thumbed its nose to these truths even though in 1913 Ontario approved Winnipeg’s removal of Shoal Lake’s water through a law, an order in council, that stated full compensation must be made to the people of Ontario and, quote, all private parties whose lands and properties may be taken, injuriously affected or in any way interfered with due to the removal of the water.”