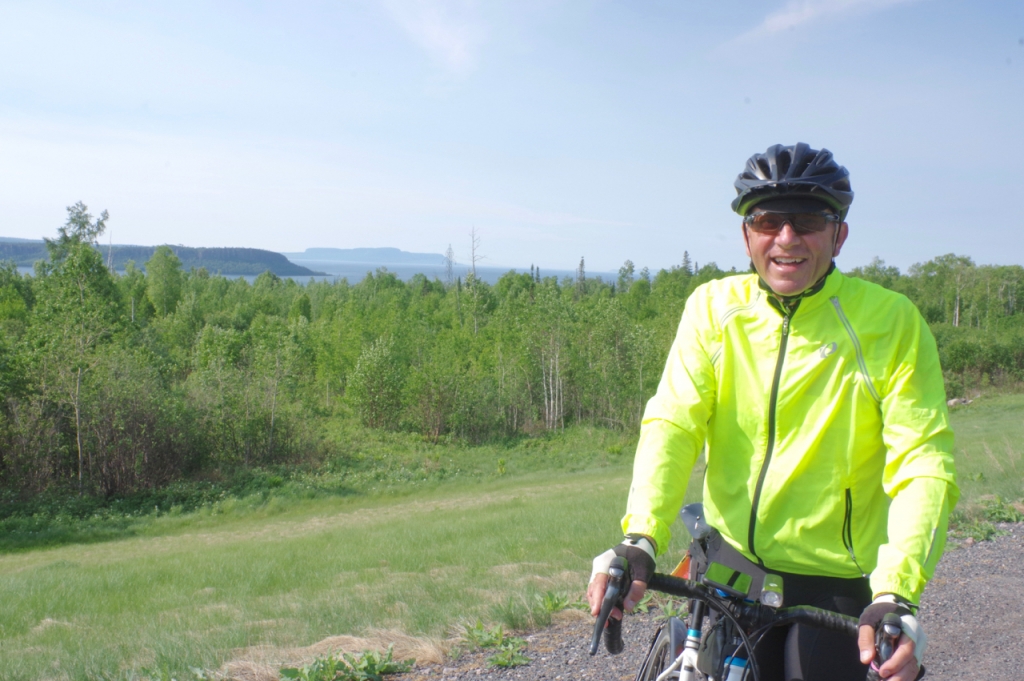 Anglican Bishop Robert Hardwick, from Saskatchewan, stops on Hwy. 11-17 between Thunder Bay and Nipigon during his 62-day 7,877-kilometre journey across Canada to foster unity, healing and reconciliation. Photo by Rick Garrick.

“A lot of people want to engage with that, but don’t know how to,” says Hardwick, bishop of the Diocese of Qu’Appelle in southern Saskatchewan. “And they don’t know whether to take the first steps in helping with those things. There are several people I’ve met that are struggling — they would like to do something but don’t know how. So one way is to support the bike ride and to raise money for Indigenous ministries to provide suicide prevention and leadership training for leaders in isolated communities and to help this process of reconciliation.”

Hardwick began his 62-day, 7,877-kilometre journey on May 19 in Victoria with the goal of raising $800,000 to support Indigenous ministries within the Anglican Church of Canada and $1.2 million for building a medical centre in Muyinga, Burundi, constructing a Habitat for Humanity home in Regina and conducting evangelism and mission work in the Diocese of Qu’Appelle. He plans to complete the pilgrimage on Aug. 1 in St. John’s, N.L. Information about the Bishop’s Ride is available at: https://quappelle.anglican.ca/ministry/p/bishops-ride.

“We started off with the Songhees Nation in Victoria, welcoming me to the land,” Hardwick says. “Victoria had the most residential (school) students of anywhere across Canada, so to start there was significant.”

Hardwick says he had a “very good gathering” in Winnipeg on the 10th anniversary of the federal government’s residential school apology.

“The two Indigenous priests were there, Vincent Solomon and Murray Still,” Hardwick says. “They both did a smudging and said prayers.”

Hardwick visited the Gathering Table Anglican church in Thunder Bay on the evening of June 17 after pedalling about 108 kilometres that day.

“There’s so many things that I’m learning about the country, about the people, about myself,” Hardwick says. “I’m trying to spread the message of awareness about First Nations. It’s 10 years since the government made its apology, it’s 25 years this year since the Anglican Church made its apology, so it is a significant year.”

Doug Semple, one of the people who attended Hardwick’s talk and a regular at the Gathering Table church services, says Hardwick is creating a greater sense of awareness and influence on Indigenous issues through his pilgrimage.

“I have seen similar efforts to highlight Indigenous issues in the past (but) many of them have fizzled out after a while with no consequence,” Semple says. “I am hoping at the end of the day, with prayer and greater effort by persons like yourself who can help bring influence to the institutions of public policy, that these institutions will sit down with us and create true dialogue on what the treaty relationship ought to be about.”

Hardwick later shared a story about a boy’s efforts to save as many starfish as possible from thousands that had been washed ashore during a storm by throwing them back into the sea one at a time.

Hardwick says most of the townspeople eventually joined the boy and man and returned the starfish to the sea.