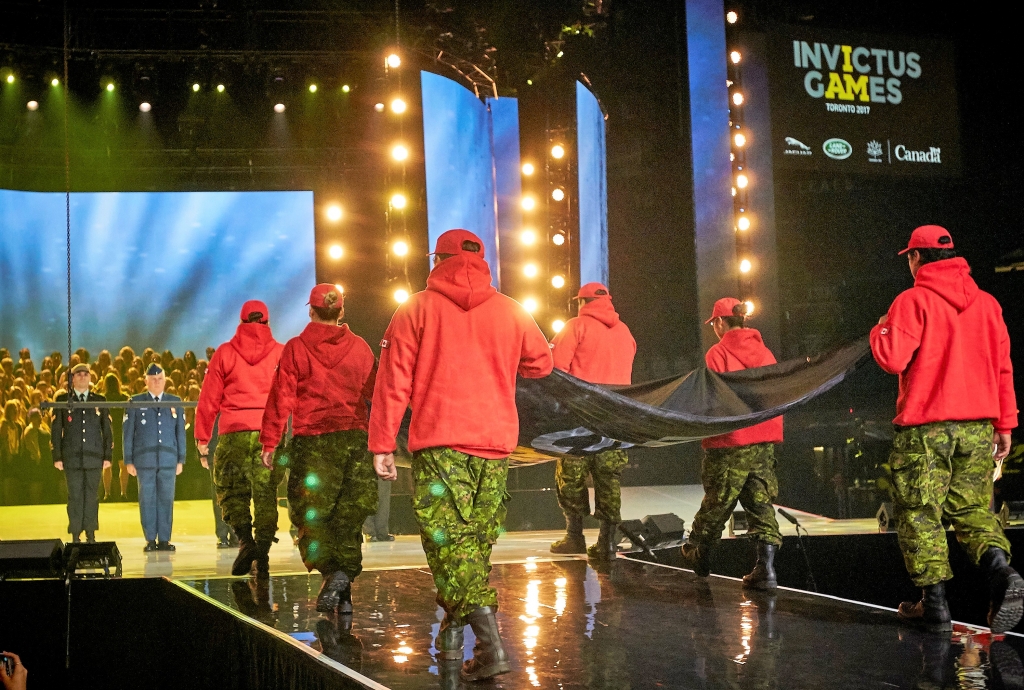 Canadian Rangers carry the Invictus Games flag across the arena floor to the stage. Photo by: Carole & Roy Timm Photography.

Six Canadian Rangers from five Northern Ontario First Nations played a prominent part by raising the official flag of the Invictus Games at the spectacular opening ceremony of the Games in Toronto, watched by an international television audience of millions of viewers.

Lieutenant-Colonel Matthew Richardson, commanding officer of 3rd Canadian Ranger Patrol Group, which commands the Canadian Rangers in Northern Ontario, said he was impressed by the Rangers and Junior Rangers.

“It made me proud to see the Rangers carrying the Invictus Games’ flag,” he said. “For them to be part of this international event was, I think, very fitting. The six Rangers from Northern Ontario represented all of the 5,000 Canadian Rangers across the Canadian North and the work they do every single day, serving their communities and their country.”

The Rangers are part-time army reservists.

The Games were founded by Harry, who served with the British Army in Afghanistan, to motivate wounded and sick soldiers on their way to recovery. They were first held three years ago in London, England. They run until September 30.

At least 550 athletes from 17 countries are expected to compete in the sporting events, including track and field, swimming, and golf.

The name of the Games is drawn from a Victorian poem written in 1875 by William Earnest Henley. Titled Invictus, which is Latin for unconquered, the final two lines have become the motto of the Games and read: “I am the master of my fate, I am the captain of my soul.”

Master Corporal Denise Ningewance of the small Ojibway community of Lac Seul said participating in the event was a huge experience for the six Rangers who carried the flag.

“Before we went out into the arena to carry the flag to the stage we all thought about what we were doing and thinking we get to do this on behalf of the Canadian Army and all the Rangers in Canada,” she said. “I can’t explain my feelings at the moment but it was an emotional experience for me that I will never forget. Nor will the four Junior Canadian Rangers from my community who represented all of the Junior Canadian Rangers of Canada. It was a very great honour for all of us.”