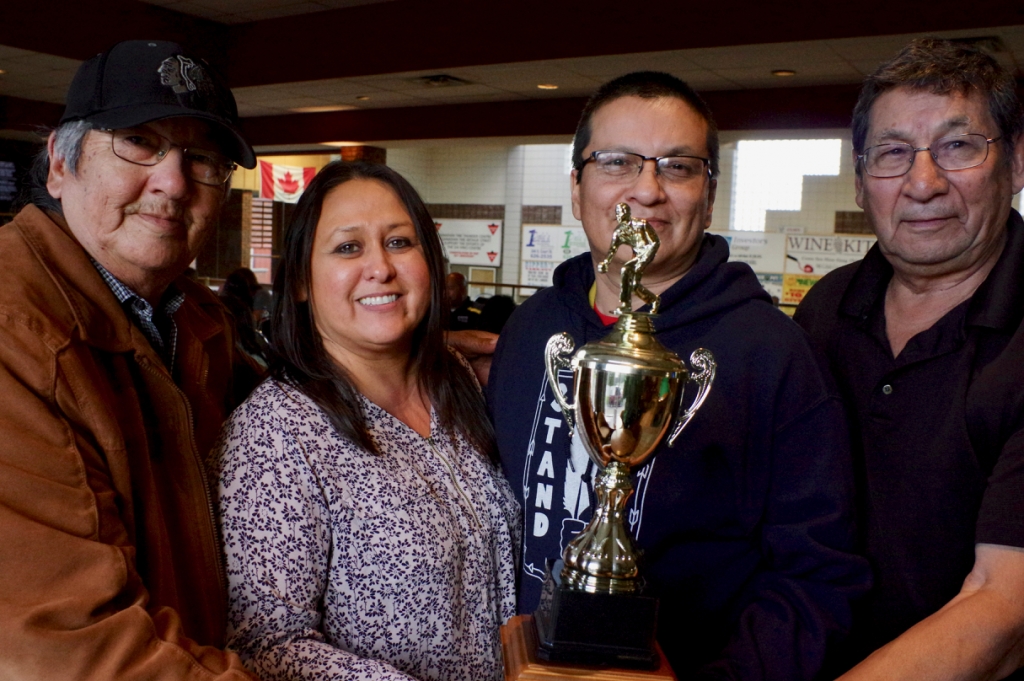 “It was just great fun,” says Peter Moses, mineral development information officer at Matawa First Nations Management and one of four players on the Communications team. “This is probably my third time (playing bocce ball). It gets better, and you get a little more fun and a little more relaxed, so it’s fun. We had some good team players here too.”

The three other players on the winning team were Carol Audet, communications manager at Matawa First Nations Management, former Muskrat Dam chief Gordon Beardy and Jason Beardy, a student at the Northern Ontario School of Medicine.

“It’s a good organization,” Moses says about the Matawa First Nations charity — Gathering of Rivers for Community Care. “You can have fun and at the same time contribute to a good cause. We had a good team again this year and we had a lot of fun.”

Gordon says this was the first time he played bocce ball. The games were played over six frames and lasted about 20 minutes.

“It’s something new and I got into the game,” Gordon says. “I got overexcited at times but I did OK. We like to let the other team relax and then go.”

Sharon Smith-Baxter, communications and marketing manager at Wasaya Airways and a member of the Wasaya team, also enjoyed participating in the tournament.

“We were ahead and we were very excited but we stayed on to check it all out,” Smith-Baxter says. “We saw the other team creep up on us and they got us. It was for a great cause and we had a great day. We look forward to coming next year and next year we are going to win.”

The tournament had 21 teams competing over 32 games at the DaVinci Centre Bocce Court in Thunder Bay.

“We had more teams than last year, so it is really doing great,” says David Paul Achneepineskum, CEO of Matawa First Nations Management. “They were certainly enjoying the games. We’re not professionals by any way, but it is a lot of fun. It really builds teamwork too.”

Bocce ball is played by four players, each of whom has one ball to throw per frame. The game begins with the team winning the coin toss throwing the pallino into the playing area. The first team also throws the first bocce ball, and then the teams take alternate throws with the players attempting to get close to the pallino or to move the pallino closer to their other balls or to move an opponents ball. The team with the closest ball to the pallino gets a point for each ball that is closer than the other team’s closest ball.

“I like it — it’s enjoyable,” Achneepineskum says. “With the fundraising we are doing, it goes towards our communities, our children, particularly in education. So it is really a worthwhile project.”

Vivian Ann Martin, executive assistant at Matawa First Nations Management, says the teams were made up of staff from Matawa and other organizations.

“We all came here to support the Gathering of Rivers for Community Care,” Martin says. “It’s all fun, encouraging everybody else to play hard.”

“So it was really great to have them,” Capon says. “It’s all for a great cause.”