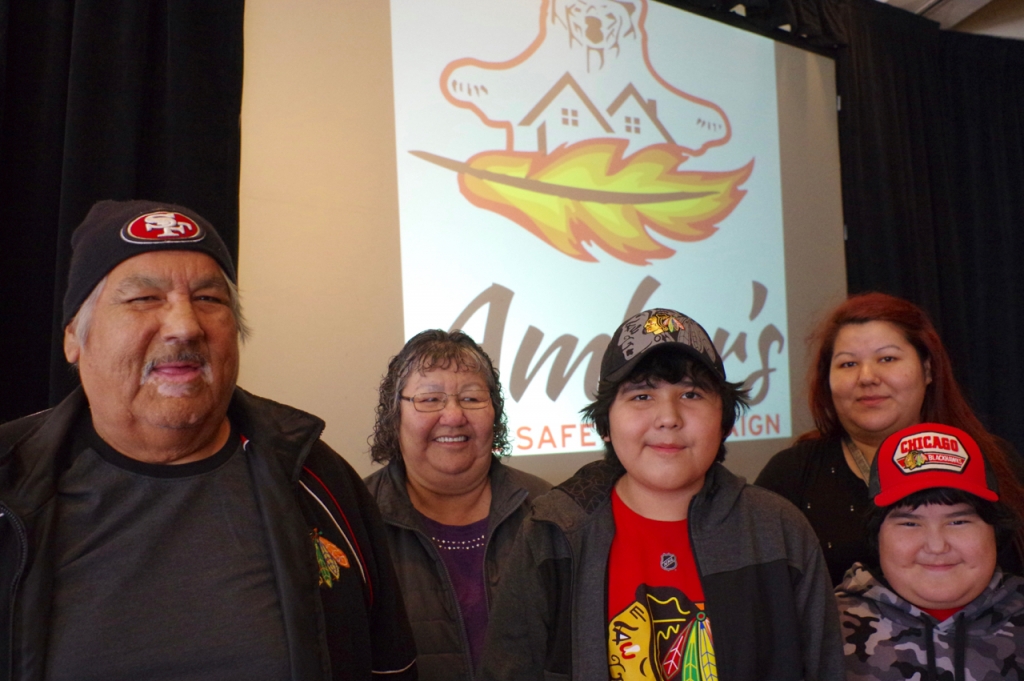 Aroland’s Caiden Gagnon, centre, received a recognition award for his winning entry in the Amber’s Fire Safety Campaign logo contest, on the screen behind him, at the NAN Chiefs Summit on Education in Thunder Bay. Photo by Rick Garrick.

The Nishnawbe Aski Nation chiefs narrowed their three education structural options down to one education model during the NAN Chiefs Summit on Education in Thunder Bay.

“For working purposes we wanted to narrow it down to one model,” says Bentley Cheechoo, NAN’s governance secretariat director, at the conclusion of the summit. “And that is exactly what we did. Now we have a model to work with where we can actually put the meat to the structure. So what we are going to do over the next six months is do that, and then we will go to the communities, talk to the community members about the model. I know some of the community members were not here. We are going to talk to them about it and they will provide more feedback.”

Cheechoo says a meeting will be held in October to “go over” the education model.

“It is a very important process for us as Nishnawbe Aski people,” Cheechoo says. “We’re actually moving forward to take on that responsibility for the education of our children and it’s not easy. There is a lot of work involved and I think that is a challenge that we have now, is to work those things out and ensure that whatever we put in place, it only can grow and not rescind from what we’ve done today.”

Cheechoo is working with a chiefs committee and the NAN Education Committee on the education system.

“(When) Bill C-33 came down, the chiefs said no and we were all together on it,” Cheechoo says about the First Nation Control of First Nation Education Act that was developed by the previous federal government and rejected by First Nations across the country in 2014. “But we can develop something that is good for our children, so that is exactly what we are doing now.”

“We all know that the education system that exists in our communities does not meet the needs of our students,” Gray-McKay says. “I believe that at this forum we were able to have the dialogue required to talk about what we need in our communities. The challenge of course will be to ensure that the government funds the process properly as identified by the leadership and those that work in the field of education. So overall it was a very positive meeting — it can only bring good given that we have bare bones in our communities when it comes to our children. So I’m positive about the meeting and look forward to the next steps that are required to bring this to fruition.”

Eabametoong Chief Elizabeth Atlookan says the discussion of what the education system would look like was “a long time coming.”

“So there were a lot of things to discuss, one of them being the community-based consultation,” Atlookan says. “So I’m glad it’s going that way, so they have a voice.”

The summit also included the recognition of 13-year-old Caiden Gagnon, from Aroland, for his winning logo in the Amber’s Fire Safety Campaign logo contest.

Oshki-Pimache-O-Win Education and Training Institute’s Rosie Mosquito also spoke about an upcoming increase in provincial funding for the members of the Aboriginal Institutes’ Consortium, which includes Oshki-Pimache-O-Win, on the third day of the summit.

“We are in a very good space in our negotiations with the Ontario government,” Mosquito says. “There is a really strong commitment to complete the policy in the coming year and their commitment is so strong because they appreciate and know the good work that our institutes are doing.”