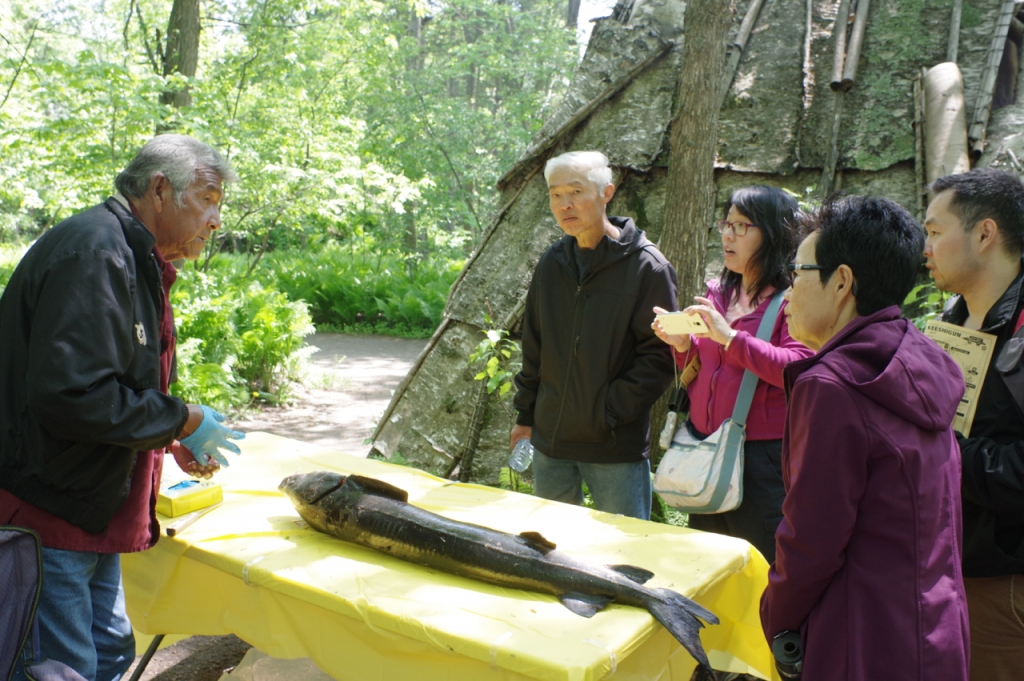 Clifford Whitefish shares some information about the sturgeon with four visitors at the Anishnawbe Keeshigun Festival, held at Fort William Historical Park in Thunder Bay. Photo by Rick Garrick.

The preparation of a sturgeon was one of the traditional activities featured at the Anishnawbe Keeshigun Festival, held at Fort William Historical Park in Thunder Bay.

“We’re going to cut it up, boil it and fry it up,” says Lac La Croix’s Clifford Whitefish, who shared information about the sturgeon at the Native Encampment. “Over there where I live, that is the best fish there is. It tastes pretty good. You can smoke it too.”

Whitefish usually skins the sturgeon for frying and cuts it crossways with the skin on for boiling.

“It has kind of a reddish colour,” says Naicatchewenin’s Tommy Councillor, who also shared information about the sturgeon. “It’s kind of greasy, even if you boil it.”

Councillor says sturgeon is good for eating at any time.

“For me, whenever I feel like I want some of it, that’s when I will (catch some),” Councillor says.

Whitefish says he has seen some sturgeon over six-feet long during spawning season.

“Maybe bigger too,” Whitefish says. “My grandmother used to tell me those bigger ones, like the 200 pound ones, they only spawn in the nighttime.”

Whitefish and Councillor were among a variety of traditional knowledge keepers who participated in the festival. Other activities included a bannock making competition, powwow drumming and dancing and the preparation of a rabbit. Wild rice and corn on the cob were also available during the festival.

Neekan says he mostly makes breads at home. He credits his Elders, friends and family members for teaching him the skills he needed to fry up the winning bannock.

“I grew up making bannock, watching mom,” Neekan says. “I used to like cooking in the kitchen with my mom and my grandmother.”

“It was great,” Grant says. “Everyone was really fun to work with.”

Grant says her bannock didn’t taste very good because she mistakenly added lard to the dough.

“I didn’t know you were supposed to just cook it in the lard,” Grant says. “It was crunchy, so that was good.”

“Ever since I was young I really enjoyed dancing fancy, because I really just loved the movement and how glorious (the fancy shawl dancers) look when they dance,” Gustafson says. “It feels like a good way to show the Indigenous culture and do it through performances.”

Gustafson enjoys travelling to different communities on the powwow trail.

“I feel like getting to the destination is the best part, because you get to make memories,” Gustafson says. “The long road trips, the different kind of climates, the different landscapes are definitely mesmerizing.”

Mishkeegogamang’s Maxine Baer says this was her seventh year of sharing her knowledge of skinning animals and preparing hides for tanning at the festival.

“My son makes hand drums because I make deer hides,” Baer says. “It’s like material, kind of soft. (We tan) it for four days in the smoke. It’s great.”

Baer says she was seven years old when she skinned her first animal, a rabbit.

“My mom was teaching me how to skin a beaver and martens and minks, muskrats, squirrels,” Baer says.

Baer also shared how the Anishinabe used to make a traditional bone tool for scraping hides.