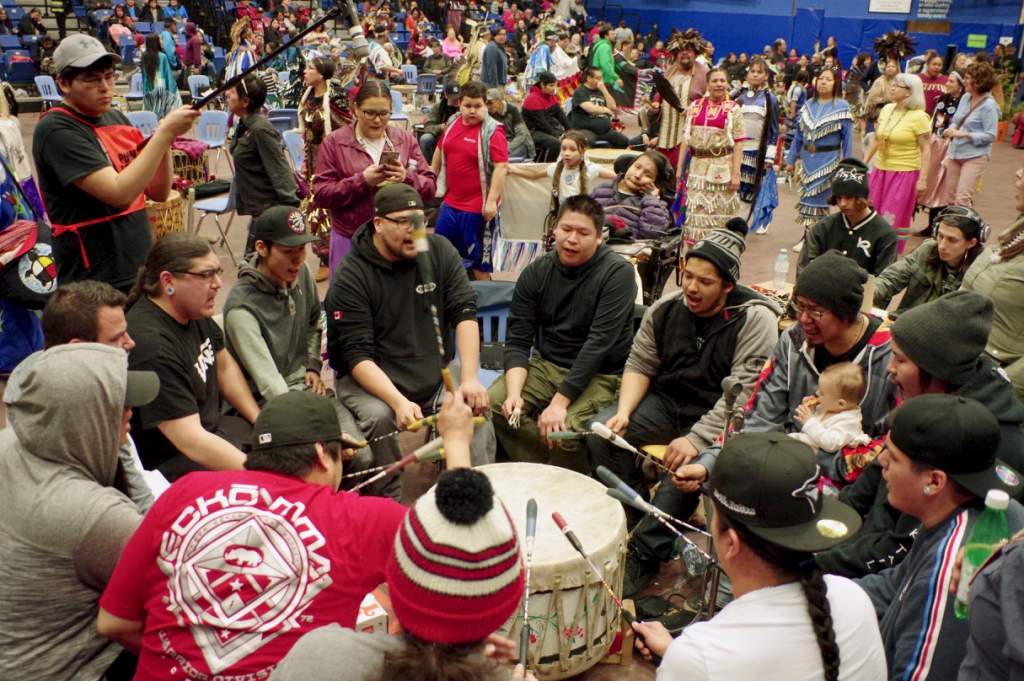 A group of drummers perform at the 2019 Lakehead University Native Student Association Powwow. This year’s powwow was cancelled due to concerns about COVID-19. Photo by Rick Garrick.

The growing concerns over COVID-19 not only affected Ron Kanutski’s opportunity to celebrate his culture at the cancelled 32nd Annual Lakehead University Native Student Association Powwow, they also affected his employment opportunities. The powwow was scheduled at the C.J. Sanders Fieldhouse at Lakehead University’s Thunder Bay campus.

“For me I think about public safety first so I understand the reasoning behind it,” says Kanutski, who works as an entertainer, comedian, emcee and group facilitator. “If that’s what people feel we need to do right now to put people’s health first, I think that is important so I’m OK with it. It isn’t the end of the world. What’s been difficult for me is just the fact that I’ve lost work for the last four weeks.”

Kanutski says his next scheduled show that wasn’t cancelled as is on April 10.

“I’ve lost nine contracts in the last 24 hours,” Kanutski says. “It’s going to be a bumpy ride for me financially. But I believe it will all turn around and we will get straightened away, but we will have a little rough patch.”

Kanutski says the other people he knows in the entertainment industry are also having their shows postponed or cancelled due to COVID-19 concerns.

“So it’s going to be rough for a lot of different people in various sectors,” Kanutski says.

Lakehead University cancelled the powwow on March 12 due to concerns about COVID-19 as recommended by the Government of Canada’s risk-determining guide for proceeding with large gatherings. The university also postponed other large gatherings on both campuses and has since cancelled classes on March 16 and 17. It plans to deliver all of its courses using online or alternative modes of delivery beginning on March 18.

“The threat posed by COVID-19 is causing great concern in our First Nations and there is a growing fear of sending community citizens to mass gatherings,” says Grand Chief Alvin Fiddler. “The Northern Bands and Little NHL Hockey Tournaments are eagerly anticipated events and many of our youth look forward to participating. However, health officials are advising against attending large gatherings where risk of contracting viruses can be increased.”

Ogichidaa Francis Kavanaugh says they recognize all of the hard work by the tournament organizers and the players’ training and preparation for the tournament.

“However the risk of COVID-19 requires all of us to exercise caution and make difficult decisions in the best interests of our most vulnerable citizens,” Kavanaugh says. “The risks associated with large gatherings such as these tournaments leading to the transmission of infectious disease to the most remote and vulnerable communities of our regions is simply too great and requires us to request postponement.”

The Little NHL announced the decision to cancel this year’s tournament on March 12.

Regional Chief RoseAnne Archibald says the Chiefs of Ontario are working to ensure that First Nations in Ontario are prepared for the potential impacts of COVID-19, noting that the World Health Organization said COVID-19 could be described a pandemic on March 11.

“While the risk of transmission remains low in Ontario, measures to prevent or slow down transmission are encouraged, such as cancelling or postponing all in-person meetings or events of more than 250 people and office closures,” Archibald says. “In the face of a pandemic, community plans are essential to mitigating the transmission of the virus. Many of our communities may have pandemic plans but these tend to be outdated and therefore cannot address the flood of potential issues. This is why I am taking steps to contact the federal and provincial governments to ensure the necessary resources and equipment are available to manage any issue should they arise.”