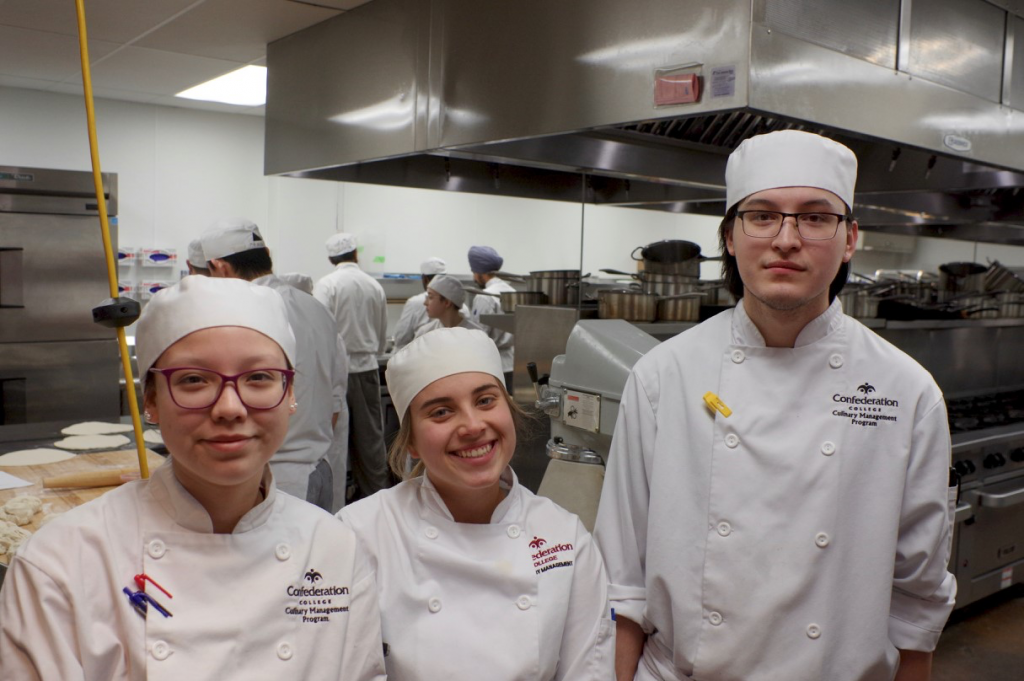 Confederation College’s Celebration Showcasing Indigenous Cuisine was a hit with a group of 4th Annual Truth and Reconciliation Gathering for Ontario Colleges participants on March 11 in Thunder Bay.

“I thought it was fabulous — the food was really delicious,” says Regina Mandamin, manager of Indigenous Relations and Inclusion at the City of Thunder Bay. “It was a fun sort of gourmet-take on Indigenous foods. I thoroughly enjoyed myself.”

Mandamin says the celebration was a good opportunity to network as well as be introduced to some traditional Indigenous foods.

“It was really a fun take on some of our foods that we’ve always enjoyed,” Mandamin says. “Some of the food was very rich, but it was really good to get that kind of gourmet experience.”

“It was tasty but it was also presented so artistically,” Henry says. “That is important as well because I think even food is stereotyped sometimes — you hear that you are going to eat food of a particular culture/cuisine and you just imagine that it is going to look or taste a certain way. And it was presented in a wonderful way, a very artistic presentation.”

“He talked a bit about how the food was chosen, that some of the students had gone back and spoken to some of their own Elders about traditional foods and they chose those items and turned them into the feast,” Henry says.
“They did everything from bannock to elk and it was just lovely.”

Veneruz says the celebration was a second-year function but first-year students were encouraged to join in the event.

“This started back in 2016 — at that time my second-year students were more than 50 per cent Indigenous,” Veneruz says. “So I thought I would like to celebrate their culture by having a small dinner in Rumours dining room. That just kind of snowballed into a big function in the cafeteria — Ryan Hall.”

Veneruz says the celebration was held in conjunction with the 4th Annual Truth and Reconciliation Gathering for Ontario Colleges, which was held March 11-13 at the Best Western Plus NorWester Hotel and Conference Centre.

“It was opened up to the general public as well,” Veneruz says. “It’s about celebrating the region, celebrating the food and the culture and the way food was prepared around northern Ontario.”

Nevyn Vincent, a second-year Culinary Management student from Whitesand, says he prepared the meat for the fry bread pizza with Prosciutto, duck meat and dandelions.

“I’ve been tearing Prosciutto apart and slicing it (and) tearing the duck apart,” Vincent says. “It was pretty fun.”

“I just did all the macaroons for tonight,” Horton says. “It was pretty interesting — I’m really glad they’re using a lot of the Indigenous ingredients from around and it’s pretty cool to see how each one is going into each station and each dish and how they’re just tying it together to make it like a contemporary meal and plating.”

Rebecca Savoy, a second-year Culinary Management student from Thunder Bay, says the class learned “a lot” about the foods that are Indigenous to the land.

“And we’ve learned how to make that food contemporary and appealing to a lot of the people who aren’t too familiar with a lot of the Indigenous cuisine,” Savoy says. “I’m making bison burgers on bannock buns, and we’re also making elk carpaccio, which is pretty interesting.”