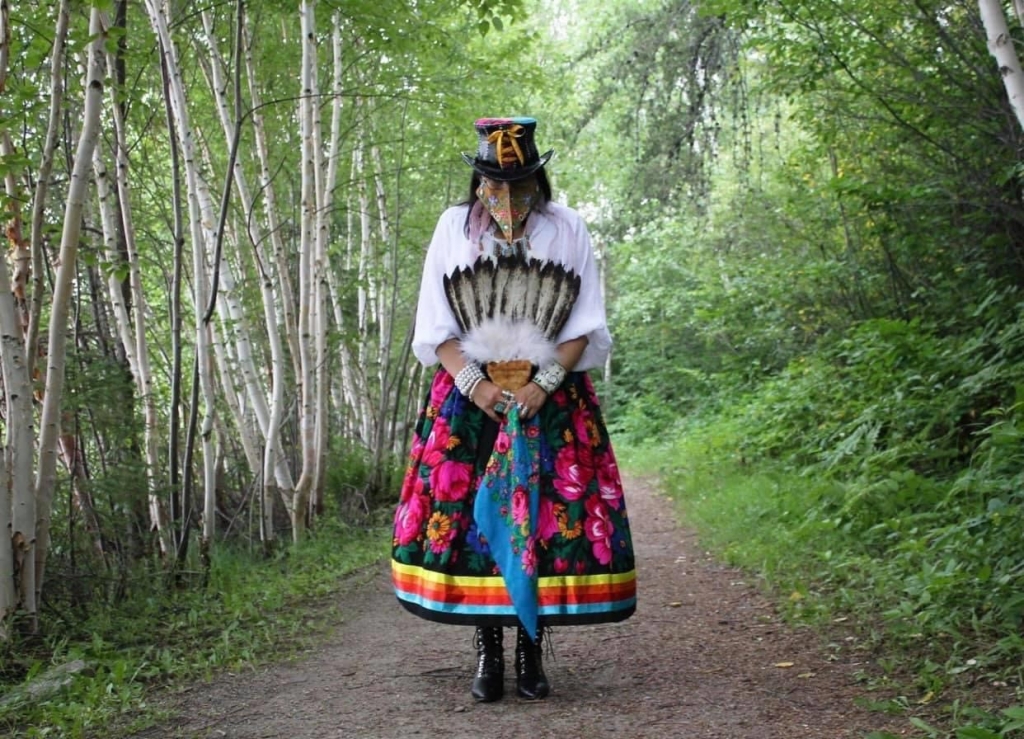 Weenusk artist Dolores Gull is looking forward to co-hosting the 2nd annual virtual Indigenous fashion show this fall after creating her own version of a plague doctor mask during the COVID-19 lockdown. Gull and co-host Jennifer Wabano, who held their first fashion show in Timmins in November 2019, are hosting this year’s fashion show to showcase their handmade crafts and custom apparel, with their models doing a virtual runway walk in the bush trail.

“When this whole pandemic began, we were unsure if we were going to hold a 2nd annual Indigenous fashion show in the fall,” says Gull, owner of CREE STYLE BY De LORES, via an e-mail interview. “We were supposed to have the show next year, but something came alive, a vision came that we just had to do this — a first show of its kind. We always like to do something different and extraordinary. We wanted to bring change, so we took extraordinary measures.”

Gull says the idea for the plague doctor mask came to her while doing research on the last pandemic after her daughter showed her a Facebook group called Breathe and encouraged her to make her own mask.

“The first thought that came to mind, it reminded me of a ceremony that’s held at a Sundance,” Gull says. “I knew right then and there; a vision came that I needed to create.”

Gull says the beaded flowers on the mask connect her to the land and the beaded lightning bolt on the middle of each side is there to remind people to be in balance with life.

“The three beaded circles are about life and to keep it simple,” Gull says. “I used the traditional smoked tan caribou hide that my mother gifted me, and I attached a ribbon hanging on the side with snowy owl feathers that my late grandfather gifted me. The whole element of the beaded doctor mask holds a special story and it has encouraged me to be more in life with my beaded creations and masterpieces.”

“The scent of the traditional smoked tan caribou hide brings fond memories of growing up,” Gull says. “This is what keeps my ultimate dreams alive and to keep the tradition alive. I knew what I wanted to be when I was five years old. I wanted to become an Indigenous fashion designer and to carry on the traditions of making moccasins, mukluks, mitts and beaver fur hats.”

Gulls says she wasn’t doing much beading before the pandemic hit but beading and designing are now one of her daily routines. She is also working on spiritually inspired outfits for the fashion show.

“I’ve noticed that a lot of designers/artisans are trying new designs, new challenges in their skills,” Gull says. “We somehow motivate each other thru social media.”

Gull encourages people to take extraordinary measures if they want change in their life.

“Knock down barriers that’s holding you back, this will help your creativity come alive,” Gull says. “Putting off projects will keep you stuck from starting a new goal. Finish your projects and your motivation will come back. Create a vision board to keep your dreams and goals alive.”

Gull says she has been working on her art for the past 30 years by using visions of the past to keep the old style or traditional style alive with a contemporary look.

“Using the traditional components in my work keeps me connected to the land and my own personal history,” Gull says.