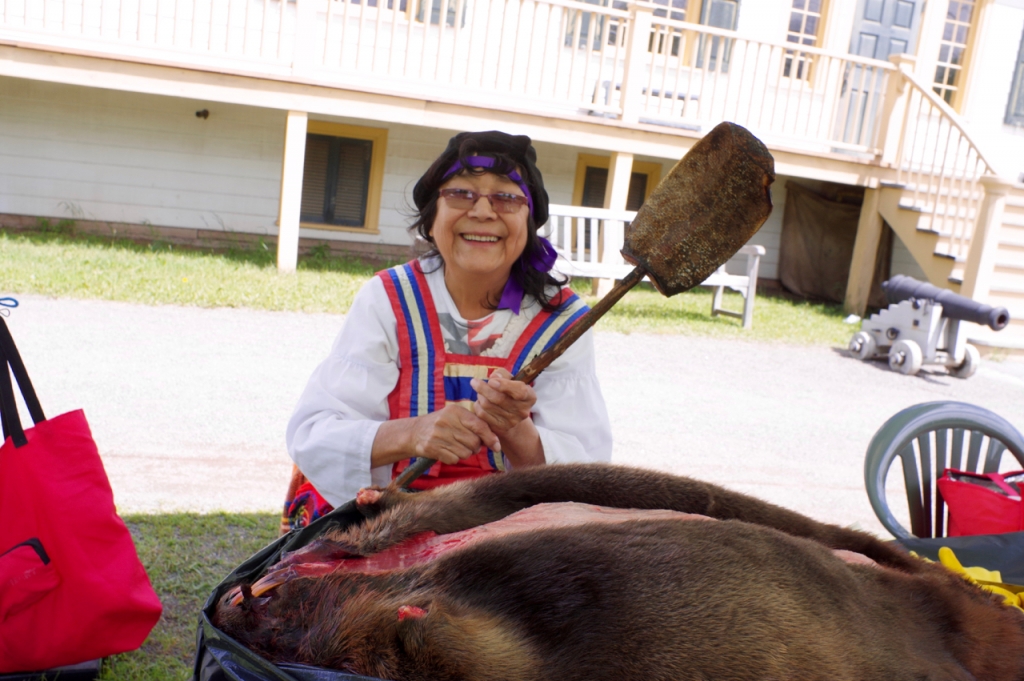 “It’s excellent and I love it,” says Masim Gahavidel, a visitor from Tehran, Iran. “I hope these competitions will happen more in this city. The traditional foods from here are more interesting for me.”

“I just did it the way I was taught how to make bannock over the open fire,” Meshake says. “(The second batch) is always better than the first. The first batch is like the testers. You find out how hot your fire is and then away you go.”

“This year we have created an educational exposition on First Nations culture,” says Elliott Cromarty, FWHP’s Native heritage program coordinator. “It’s a great time of year because we have a lot of international tourists coming through. We are just glad that they get to experience First Nations culture as they talk with our dancers and our various artisans throughout the site and participate in (activities) like the bannock making contest.”

“I started skinning beaver when I was seven years old,” Baer says, noting her mother also taught her how to skin rabbits when she was seven. “After that, at 10 years old I (was) cleaning moose hide.”

Baer put the beaver tail into the fire for about half an hour to clean it.

“After that I’m going to boil it for three hours,” Baer says, noting it will taste “just like smoked bacon” after she cooks it. “It’s a good meal.”

Darren Lentz showed visitors how to repair two pairs of snowshoes that he made many years ago.

“I’m redoing them on the ends because they’ve worn out,” Lentz says. “They’ve been put to good use. The middle part seems to be OK, it’s drying out a little bit.”

Lentz soaked some deer hide in water to prepare for cutting into new lacing.

“I have a gauge that I make out of a piece of wood and a razor to the size of the hide that I want,” Lentz says. “Because it’s the ends, I want it a little thinner. And I just finished a needle I made for weaving back and forth.”

Lentz says he is carrying on the teachings of Gilbert Baxter, who taught him years ago at FWHP.

“He was one of the original ones here who started the native encampment and brought all of his knowledge from the bush,” Lentz says.

Aroland’s Douglas Gagnon shared some of his songs on the drum during the cultural dancing and drumming demonstration.

“I used to work here in the 1980s with Freda McDonald, Gilbert Baxter and my aunties Mary Magiskan and Maggie Magiskan,” Gagnon says. “It was fun. It’s educational and we try to teach whoever wants to know about language and about our culture.”

Gagnon plans to share both contemporary and traditional songs that were passed down to the Anishinabe during the drumming sessions.

“We try to mix it up and work together,” Gagnon says. “We have fun teaching the kids, and teach ourselves at the same time.”

A variety of traditional foods were also available during the event, including corn on the cob, bannock samples, strawberry drink, smoked fish and wild rice.

In addition to the bannock making contest, two other contests were also held: the double ball distance throwing contest and the wilderness survival contest.