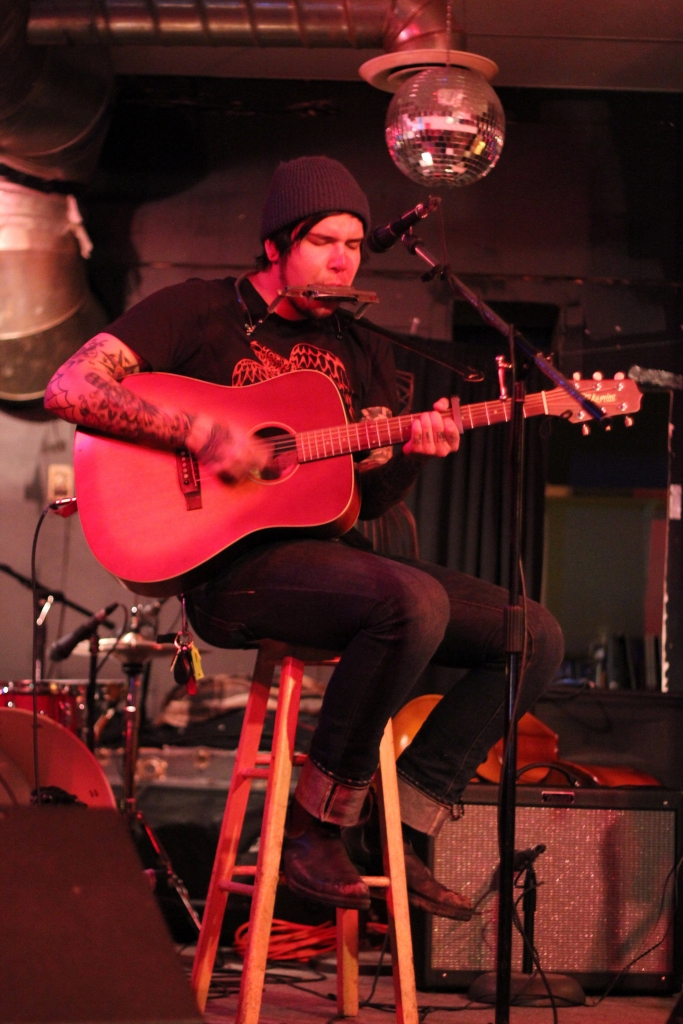 Nick Sherman is about to take the stage at the Black Pirates Pub in Thunder Bay, Ont.
The 27-year-old self-taught musician from Sioux Lookout, Ont., appears calm and cool despite his busy day on Jan. 20. He drove four hours from Sioux Lookout, did a CBC Radio interview at 4 p.m., and bought pots and pans from a thrift store for “a percussion thing” he planned for his set. And all evening he helped unload equipment, set up the stage, coordinated the performers, sold CD’s, and schmoozed with friends, family and fans who came out to support him in the release of his new album, Drag Your Words Through.
As the band wraps up its set, a polite and charming Sherman excuses himself to prepare for his performance.
Sherman was born in Sioux Lookout and spent his childhood living in Weagamow Lake First Nation (also called North Caribou Lake), out on the trapline, and Sioux Lookout.
He said he became interested in music as far back as he can remember.
“My first interest in actually playing music was seeing my grandpa playing the guitar,” he said. “Just seeing the guitar and him playing it, I just always wanted to do that.”
He’d strum the guitar that was lying around in his home and didn’t learn to play until he was about 13-years-old.
“I had an old book with gospel songs in it – it was my mom’s – and at the back it had a chart with all these chords, and I learned every single chord,” he recalls, laughing.
His early influences were gospel music and older country songs.
“But the really inspiring stuff was seeing friends learning how to play the guitar and playing their own stuff, and being exposed to the music they played or wrote.”
Sherman wrote his first song when he was about 15.
“But it wouldn’t have been in the style of a singer-songwriter,” he said. “It was more punk-rock music at the time.”
He laughs in trying to recall what that first song was about.
“It was probably about a girl in high school,” he said between chuckles. “In high school, that was your biggest worry.”
His current style didn’t begin to evolve until he was about 18, which is when he began to take songwriting more seriously.
He lumps his musical style into two categories.
“When I play by myself, it’s more of a contemporary folk singer-songwriter style, and when I’m with a full band, it’s more folk-rock.”
He said he uses the word “folk” because it’s more of a storytelling genre.
“A lot of my songs have that, not literally a story, but there’s a story that influences the song.”
And he uses contemporary to differentiate it from “traditional” folk.
“Traditional folk I think is more message-driven. It’s more literal with the lyrics,” he said. “So I use contemporary because my lyrics aren’t so literal, there’s more meaning to what I’m actually saying.”
Sherman said the early songs he wrote were relationship-based songs and “kinda nomadic.”
“I moved around a lot at the time, and lived in different cities,” he said.
The later chunk of his songs, like Winterdark, were about ‘looking through other people’s windows.’
“Not literally,” he’s quick to clarify with a laugh. “But in that I began to hear and see experiences from people other than myself, and that’s what’s inspiring.”
In composing songs, inspiration comes in a variety of ways, and it could be lyrical or musical.
“They run parallel to each other,” he said. “I’ll come up with a melody and make up words for that, or suddenly a stream of lyrics will come out, and I write music to that.”
The 10 tracks in Drag Your Words Through were written between 2005 and last summer, and were prepared for recording over the last two years.
Sherman received a grant from the Ontario Arts Council that allowed him to take two months off from work last summer to focus on recording. He previously had earned a certificate in audio engineering at Recording Arts Canada in Toronto in 2009 and enjoyed the recording process for his new album in Thunder Bay.
“Aside from playing music, I’ve always enjoyed recording music and mixing it,” he said.
“It was very interesting because we really had to look at each song microscopically.
“It was hard to see the big picture of how it was going to sound like, and once we started the project, we were dissecting the songs and making them sound how we wanted them to sound.”
Sherman said the songs took different shapes in the recording process and he didn’t get a feel for how the album would sound until it was complete.
“I am very happy with it,” he said. “The process was fun. I was working with friends, and my friend Jean Paul (De Roover) produced it. It was amazing.”
Sherman takes the stage in Thunder Bay and starts off with a solo set with his acoustic guitar and later, a harmonica. He plays tracks from his new album along with some covers, and later, his band joins him to finish his set to the eclectic and dancing crowd.
“It was a great turnout and a lot of fun,” he said.
The show is the first in a planned series of concerts to promote his album. The next night, he opened for a band at the Apollo and the following weekend, he played in Sioux Lookout on Jan. 28.
Sherman plans on playing more shows in northwestern Ontario in the upcoming months and then hopes to play in southern Ontario and Western Canada venues in the summer.
Drag Your Words Through is available on iTunes or through his website nicksherman.ca.