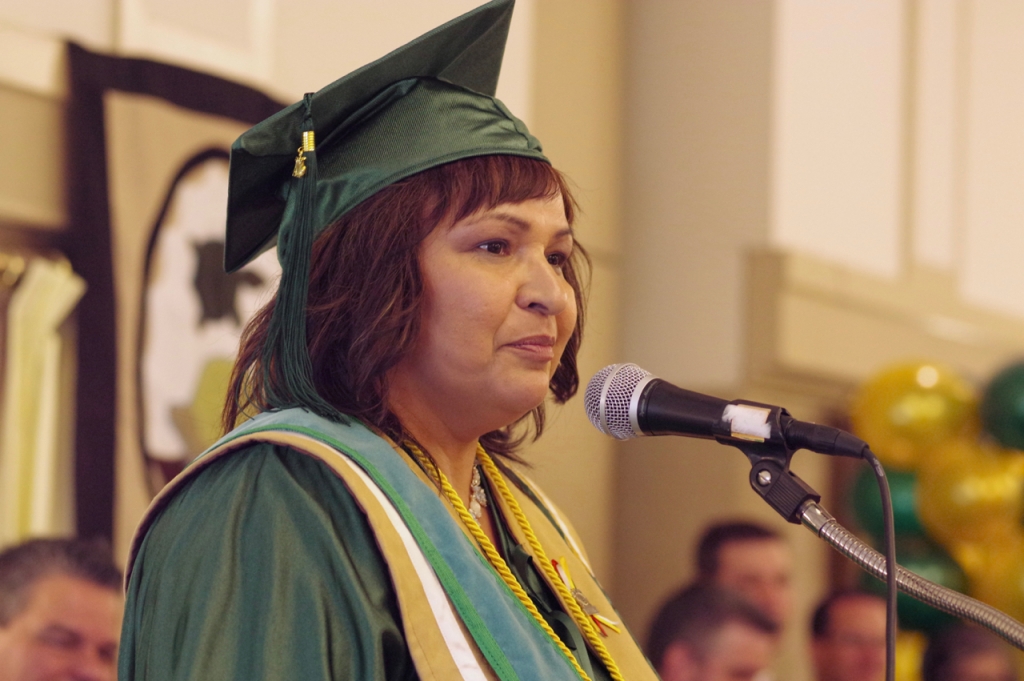 Aroland’s Donna Gagnon was honoured to deliver one of three valedictorian addresses at Oshki-Pimache-O-Win Education and Training Institute’s 2016 Graduation Ceremony in Thunder Bay.

“I try not to get emotional, but I’m just so happy to be here as part of this ceremony with these other graduates,” Gagnon says. “I would like to take this time to congratulate each and every one of them as well, especially my fellow classmates.”

“We’ve grown together and we’ve struggled together,” Gagnon says. “But we never complained. We just supported each other like we were supposed to.”

Gagnon also acknowledged the support provided by the instructors and staff at Oshki.

“It’s been a remarkable journey,” Gagnon says. “They are a great support and great teachers. They didn’t let us fall. If we fell, they picked us up where we needed to be.”

Gagnon completed the program for herself and her family.

“I always wanted to go back and get an education,” Gagnon says, noting that she is 52 years old. “And for my family as well. They were very supportive and they encouraged me, even when I wanted to quit there at times.”

Gagnon wants to continue working in her field. She has been employed with Tikinagan Child and Family Services in Aroland for about nine years.

“I can’t thank (Tikinagan) enough for letting me to take this opportunity to come back to school, to leave my job for two weeks and then come back to it,” Gagnon says. “I was lonely at the beginning. But now I stand here at this podium with this hat on receiving my diploma and I couldn’t be more proud.”

Gagnon was one of 32 graduates from seven Oshki programs who were celebrated during the June 10 graduation ceremony at the Airlane Hotel and Conference Centre.

“Our students … have made many sacrifices to be here today and to be granted their certificates and diplomas,” says Rosie Mosquito, Oshki’s executive director. “It truly is a great day, and it is always so awesome to be a part of this event, to witness the success of our students.”

Mosquito congratulated the students for making the commitment to study and complete their programs.

“We have heard from the valedictorians who talked about their experiences while they were at Oshki,” Mosquito says. “And the bottom line, they made that commitment to pursue an education. That was a significant step; that was a very important step.”

Mosquito also acknowledged the support provided by the families, communities and employers of the graduates.

“Employers, you supported your students,” Mosquito says. “You have enabled them to take their programs so they can increase their knowledge and their skills and to help provide a better service to the people you serve, the clients you serve.”

The Aboriginal Financial and Economic Planning Program graduates were Kakegamic and Marissa McPherson.