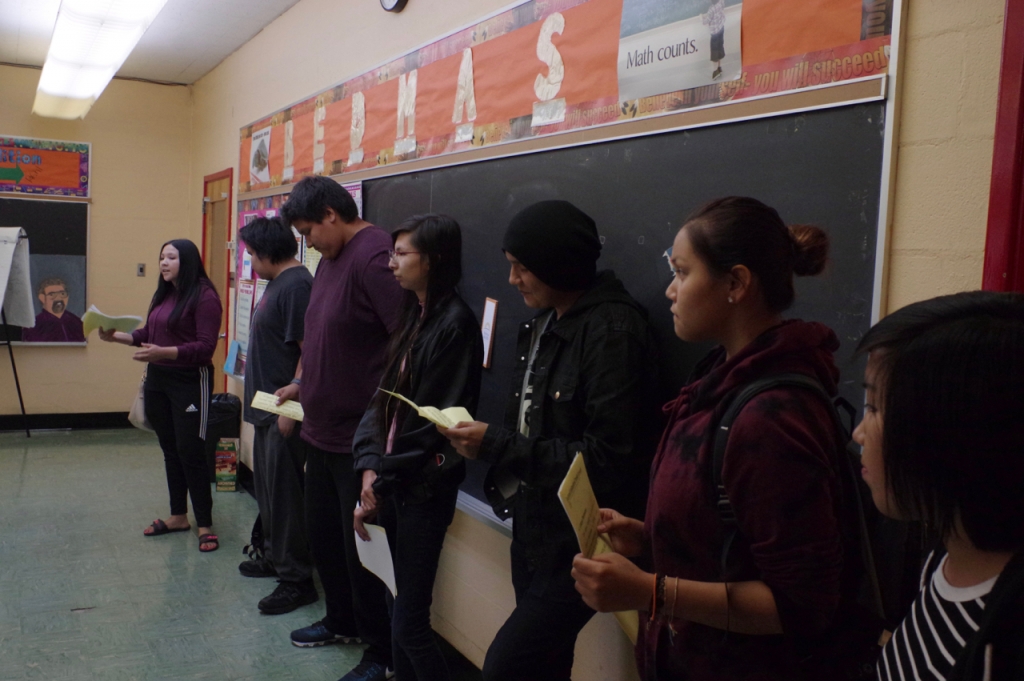 “All summer I’ve been working on the DFC orientation from a student’s perspective to make sure that they will be safe in the City (of Thunder Bay),” says Ashley McKay, a Grade 12 DFC student from Sandy Lake. “Some of the main points were racism, being safe, making sure where to go on the city buses, and graduation. It is important to graduate.”

McKay also shared information on using a whistle and following the buddy system to keep safe while in Thunder Bay during her presentation.

“I think they will know now what to do in case something happens,” McKay says. “The next steps are to follow up with the students, check in on them, say hello. We all go to school here, so we’ll probably go classroom to classroom again in a month or two to check in with everybody.”

Alaina Sakchekapo, a Grade 12 DFC student from Weagamow, spoke to the students about the Nishnawbe Aski Nation Emergency Chiefs Meeting on Education that she attended in early July at DFC.

“(I spoke about) having freedom of choice for the students on where they go to school because there was talk about closing down the school or adding restrictions on who could go, like by age,” Sakchekapo says. “We’re like peer support, so just knowing that we’re there is really going to help them. I hope to do a followup if they wanted to talk more about what exactly went on at the (Emergency) Chiefs Meeting and if they had any questions for me about that. I’m very open to talking to people and I want to let them know what is going on in their school and that they should have the choice.”

Meschaquin Neekan, a Grade 10 DFC student from Mishkeegogamang, spoke to the students about overcoming shyness during his presentation.

“I talked about taking positive chances, new challenges (such as being on) APTN and bringing awareness to the challenges of the First Nation students,” Neekan says. “(The students) were pretty observant and they got to understand what the school offers. And they do realize now they are not alone and if they have problems or anxiety they have someone to talk to, like to the teachers and to their friends at school.”

The Student Ambassadors initiative was developed this past summer by a group of DFC students who were hired to work with the Regional Multicultural Youth Council (RMYC) in Thunder Bay.

“One thing that came up was a peer support system so that students who walk in the same hallways and share the same classrooms in the city can meet with the new students and just reassure them that (Thunder Bay) can be a safe place if you avoid the risky and bad places to go and then of course support them if they are struggling with school work,” says Moffat Mukato, executive director of the RMYC. “And then again the best thing is to give the young people a voice. So it’s trying to give the young people a voice so that we can address the issues so we can make sure they are safe and then graduate.”

DFC Principal Sharon Angeconeb says the school had previously been looking at developing a student ambassadors program for the students.