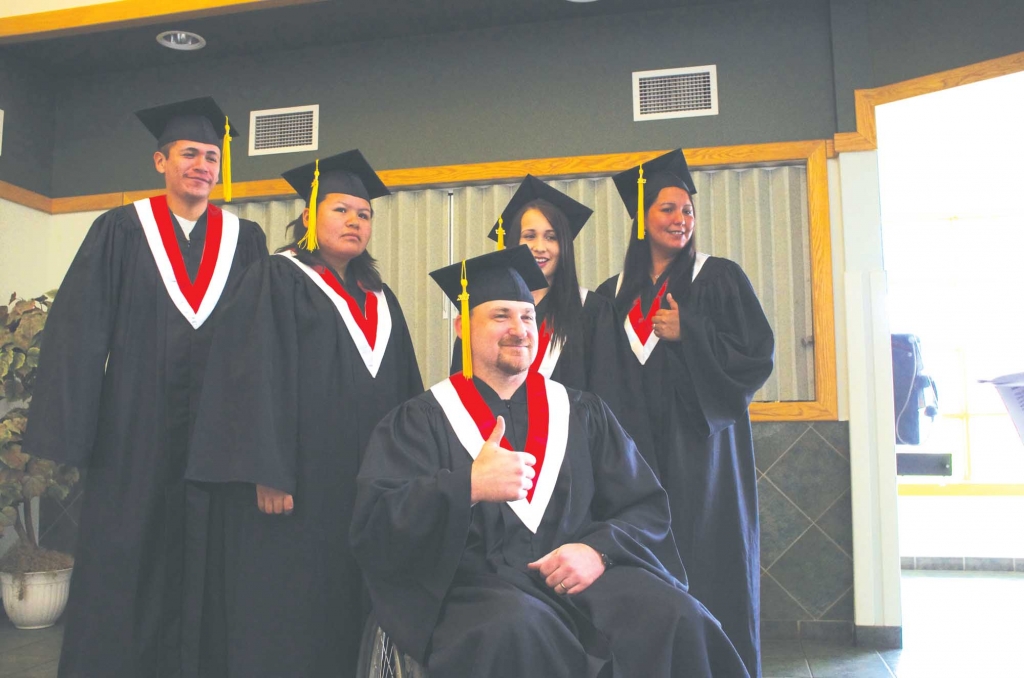 Marten Fall’s Jasmine Baxter is keeping her future career options open after graduating from General Educational Development (GED) at the Matawa Learning Centre.
“I have a few options right now — I’ve got to look over the college courses again and hopefully I can get in this fall,” Baxter said during the June 26 graduation ceremony at the Italian Cultural Centre in Thunder Bay. “If not, I’ll wait until next fall. I’ll see what I can do and where it will take me.”
Although Baxter is not sure about which career path to choose, she has a few options in mind.
“I like talking to people and helping people,” Baxter said. “I wouldn’t mind working with children, with family services or with counselling.”
Baxter enjoyed her time at the Matawa Learning Centre, which is located in the Matawa First Nations building on Court St. in Thunder Bay.
“It was very flexible and had really good teachers,” Baxter said. “They helped me out a lot and I wouldn’t have been able to do what I did without them.”
But she still had a hard time completing the math stream of the program.
“I put a lot of time into my math,” Baxter said. “It was pretty hard; I have a hard time with math. So with the people that were helping me, I was able to do it but it took me another try to complete the math part. I put a lot of energy into it and gave myself a few headaches along the way.”
Baxter encouraged other people to continue with their education goals no matter how difficult it is.
“Keep going, it’s possible, you can do it,” Baxter said. “I didn’t think I could do it but I did it.”
Baxter was one of five people who graduated from the Matawa Learning Centre: Long Lake’s Breanne LeClair and Carl Levesque graduated with GEDs while Neskantaga’s Maria Sakanee and Eabametoong’s Levi Yellowhead graduated with Ontario Secondary School Diplomas.
LeClair returned to school to provide a better future for her 18-month-old baby son.
“My plan is to do broadcast journalism,” LeClair said. “I want to do radio and basically just bring attention to the living conditions on reserves.”
LeClair said many people do not understand the reality of life on reserve.
“They just look at me and say there is nowhere in Canada like that,” LeClair said.
LeClair completed most of her studies at home.
“I came in for the testing and I passed,” LeClair said. “I got my diploma in April.”
LeClair plans to study an online English course to improve her language skills before she enrolls in a broadcast journalism program either in British Columbia or southern Ontario.
The Matawa Learning Centre provided the GED training through a pilot program funded by Aboriginal Affairs Northern Development Canada.
“The first student came through on Nov. 13 and we ran a 16-week program,” said Jackie Bedard, adult education instructor at the Matawa Learning Centre. “So we’ve managed to run two programs in the nine months.”
A number of awards were also handed out during the ceremony, including the Matawa Education and Rotary Bursary to Danielle Yellowhead for personal achievement and two Aboriginal Youth Achievement and Recognition Awards to Tessa Bois for personal achievement and Danielle Yellowhead for academic achievement.
Matawa Learning Centre Achievement Awards were handed out to Julianne Mequanawap for attendance, Tyra Achneepineskum for most improved-intermediate, Maria Sakanee for most improved-senior, Julie Mequanawap for senior academic achievement, Shannon Coaster for intermediate academic achievement, Levi Yellowhead for math-senior, Destiny Baxter for math-intermediate, Deanna Moonias for science, Olivia Moonias for history, Dillon Atlookan and Tessa Bois for literacy, Danielle Yellowhead for English-senior and Kelsea Achneepineskum for English-intermediate.
Strength Awards were handed out to Kelsea Achneepineskum, Tyra Achneepineskum, Dillon Atlookan, Sid Atlookan, Destiny Baxter, Tessa Bois, Shannon Coaster, Allison Keeskitay, Julianne Mequanawap, Sandy Missewace, Deanna Skye Moonias, Olivia Moonias, Felicia Moonias, Trisha Moonias, Justine Neshinapaise, Maria Sakanee, Caitlin Wabasse, Cody Wabasse, Trevor Wabasse, Clifford Waswa, Danielle Yellowhead, Justin Yellowhead, Levi Yellowhead and Dakota Yesno.