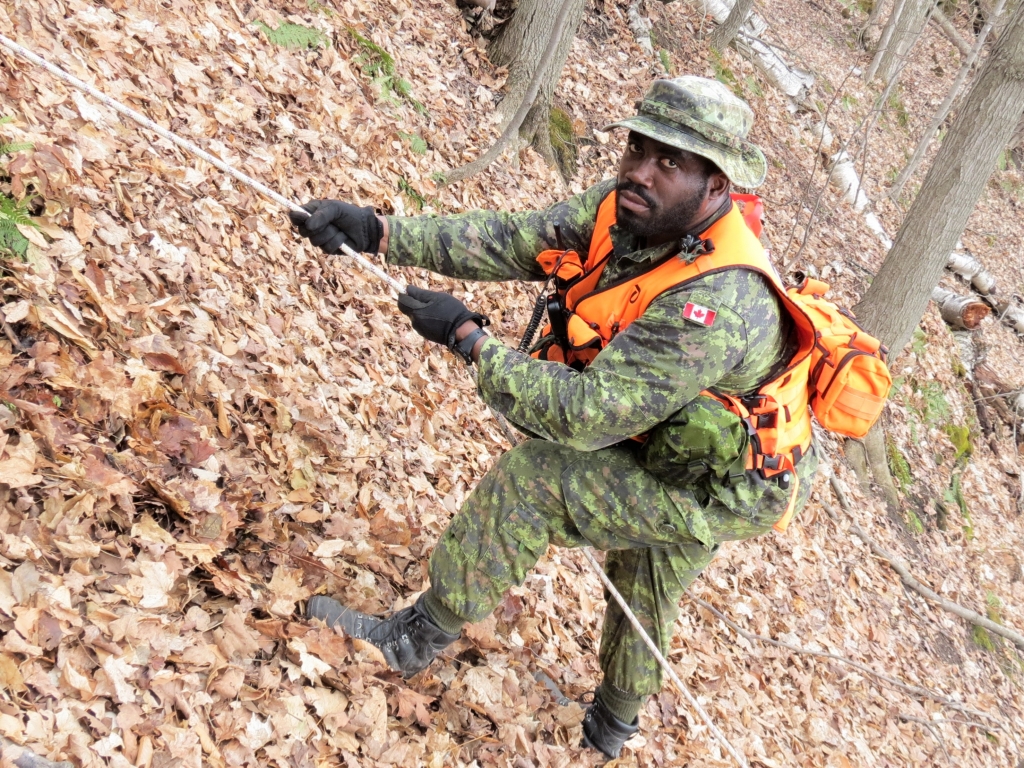 A few years ago the Canadian Armed Forces had a recruiting slogan that said “there’s no life like it.”

For Sergeant Eric Scott, a new Canadian Ranger instructor with the 3rd Canadian Ranger Patrol Group (3 CRPG), which commands the Rangers of the Far North of Ontario, the slogan still rings true.

He joined 3 CRPG as a Canadian Ranger instructor last December, after 22 years with the Canadian Army. A month later he found himself in an immersion suit and floating in broken ice in Parry Sound harbour while learning how to rescue someone who had fallen through ice.

It was his introduction to the kind of skills a Ranger instructor has to learn and be able to pass on to the Rangers of Northern Ontario. The ice rescue course he said at the time was “eye-opening.” It was also not the kind of training, he said, that “a lot of either regular force or reserve members of the army ever get an opportunity to do.”

He has just completed two weeks of ground search and rescue training with the Ontario Provincial Police as part of the OPP’s elite emergency response team training program. The Rangers, who are part-time army reservists, work closely with the OPP on search operations. Since the beginning of 2015 the Rangers have rescued more than 100 people in Northern Ontario.

“The OPP training required a lot of mental alertness,” he said. “I’ve done things that were more physically demanding in the army but this was more challenging. On the army side navigation is pretty much the same but with search and rescue the more meticulous you are the more the chances of being successful and rescuing someone. Navigating at night and following a search pattern when you are physically tired is something else.”
On the last day of the OPP training he participated in a field test in Mono Cliffs Provincial Park. One of its challenges was climbing an almost vertical 100-meter cliff. “That was tiring, very tiring,” he said. “I’m glad I didn’t have to do it at the end of the day.”

“He’s going to be doing a lot of other courses like that that most people in the military never get,” said Master Warrant Officer Barry Borton, a company sergeant major with 3 CRPG. “We do an awful lot of civilian type courses, like ice rescue, swift water rescue, rope rescue, that are not really offered in the military.”

Every Ranger instructor has to be a qualified first aid instructor and be able to work with Emergency Management Ontario and other government and civilian agencies in emergencies such as floods and forest fires.

“All of these courses,” Master Warrant Officer Borton said, “are to qualify the instructors to be able to pass on skills to add to the traditional skills that the Rangers already have, such as their knowledge of the land and waters in their territories.

“The instructors also have to keep up their military skills, because they are still members of the military and they need to worry about their career. So they have to take special military courses for that.”

One of the most difficult tasks new Ranger instructors face is being able to adapt to First Nations cultures. They typically spend 120 to 150 days travelling, often alone, to remote and isolated communities with few of the amenities of the south. They sleep where they can and often take their own food with them because many communities do not have restaurants.

“Sometimes new instructors are too set in their ways and cannot adapt,” Master Warrant Officer Borton said “You’ve got to step back from the military and talk with the Rangers in a way they are comfortable with. You have to gain their trust.

“You have to learn that the Rangers don’t say a lot but when they do you’d better listen. They‘re the experts in the North, not us. We are up there to make the Rangers’ job easier, so they can use their knowledge and their skills to help their communities.

“I don’t think of them as my Rangers. They’re my friends. Being an instructor with them can be a great job.”