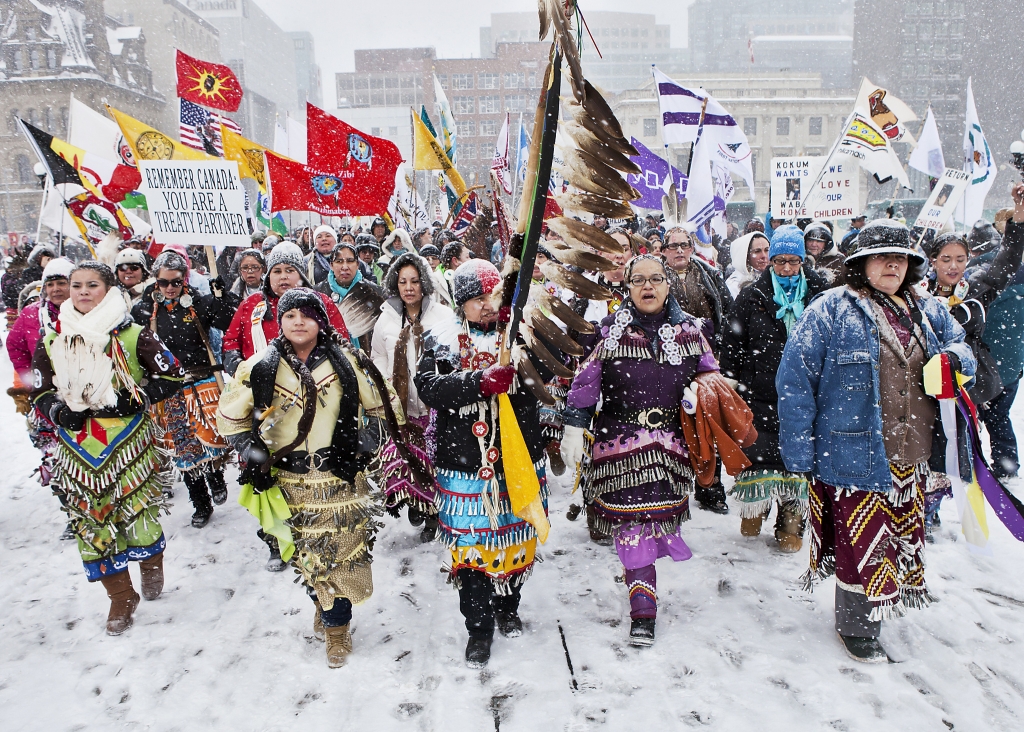 On Jan. 28, Idle No More (INM) supporters convened at Parliament Hill in Ottawa for what was called the INM National Day of Action. Cheryl Suggashie of Pikangikum First Nation, and her friends from her university’s jingle dress program made the journey down to Ottawa for the protest.
“It sounds weird, but I was dreaming about it,” Suggashie said. She described seeing a sea of jingle dress dancers in three of her dreams throughout December.
Suggashie said she saw a “call for all jingle dress dancers” for the protest in Ottawa on Jan. 28 online. “That’s when it clicked. I thought, that’s where we have to go,” Suggashie said.
She called her friends who were in the Sault St. Marie jingle dress program with her, some having moved to different areas of the province, and four of them made the trip to Ottawa with their dresses.
Suggashie said she felt nervous before they left for Ottawa.
“The night before we left I could not sleep because I was way too excited and nervous. I was thinking about all those dancers, and also meeting new people,” Suggashie explained. “I was also thinking about Chief Spence; how I could not meet her yet but happy she was home with her family.”
Suggashie and her friends went to Victoria Island, the site of Spence’s hunger strike, when they arrived in Ottawa in the evening of Jan. 27.
“You could still smell the fire and tobacco, the burning medicines. I thought about the lone Jingle Dress dancer who danced in the legislature building when she was asked to wait outside, but she danced in the lobby, and I thought about all the women across Canada,” Suggashie said.
Suggashie and the other jingle dress dancers awoke early the next day to get ready, as she explained that it takes about two hours to do their hair and sort out the regalia.
“We drove downtown and it started to snow, we walked out to Wellington and the wind picked up,” Suggashie said. “We stood in the National Archives building to warm up, it was a very quiet building so every time we moved our jingles would make a lot of noise echoing throughout the lobby,” she laughed.
The dancers then walked to Victoria Island, and were instructed to go to Parliament Hill to await the drummers and all of the other INM participants. “We waited for about 20 minutes and then the marshalls came and told us to go on the road. It was time!” Suggashie said.
“My anxiety kicked in along with crocodile tears. My stomach was in knots while we lined up to wait for the drummers to come closer. I could see them about 30 feet away coming closer and closer, and then the women started shouting and singing. I waved my fan up and never felt prouder,” Suggashie said.
Once the drummers arrived, the marshalls instructed the jingle dress dancers to turn around and march in front of them up Parliament Hill.
“It was loud. We all danced and drummed in harmony, it was amazing,” Suggashie said. “We slowly got to the steps of Parliament Hill and stopped. We were told to do the Healing Dance while Parliament was in session. We danced to a side step song while our Elder was in the middle with her Eagle Staff, another proud moment I will never forget.”
After the dances, there were speakers which included INM founders, NDP party members, event coordinators, and the national chief.
“At this time my mind was still in awe about what had just happened that my ears were not paying attention to the speakers. I wanted to keep dancing,” Suggashie said.
Suggashie remembered during one of the round dances that she was holding hands with a non-Anishinaabe man from out east who was fascinated with the whole event. He told her he had never been to a round dance before.
“When it was over he shouted for joy, clapped his hands and shook our hands, and he said thank you. I never realized there are people out there who never heard of a round dance, who think it is just for First Nation’s people but it is for anyone,” Suggashie said. “I realized then that there is still a lot of work to be done.”
Since her experience in Ottawa on Jan. 28, Suggashie said she wants to learn more teachings about the jingle dress, carrying the Eagle staff protocols, and especially fasting.
“People were commenting on the weather that day,” Suggashie said. “Sure it snowed hard but we were all reminded it is another form of water, and that weather would not stop First Nations from doing what they have to do, that our ancestors had survived through in all types of weather conditions.”
Suggashie also wants to pay more attention to her dreams. Since her time in Ottawa, she feels that she dreams differently now.
Her trip to Ottawa taught her more about grassroots movements, and she learned that that they can be started by anyone.
“While living in Sault Ste. Marie, I used to wait for people to organize this or coordinate that, only because the thought of not being from this area I thought I was not allowed to.
But it is quite the opposite; one of the local chiefs reminded me of that,” Suggashie said.
Suggashie said that she went to Ottawa mostly for her children, whom she wanted to show that they are capable of doing anything and also for her late great-grandmother.
“I remember her being on APTN saying that no one wanted to learn the Traditional teachings anymore; I would want her to be proud of me too,” Suggashie said.
“I think this event is one of my most inspiring, I doubt it will be the last. I’m more motivated now, not as scared as I used to be, and I also found out who my main supporters and true friends are,” Suggashie laughed. “It’s a great feeling.”