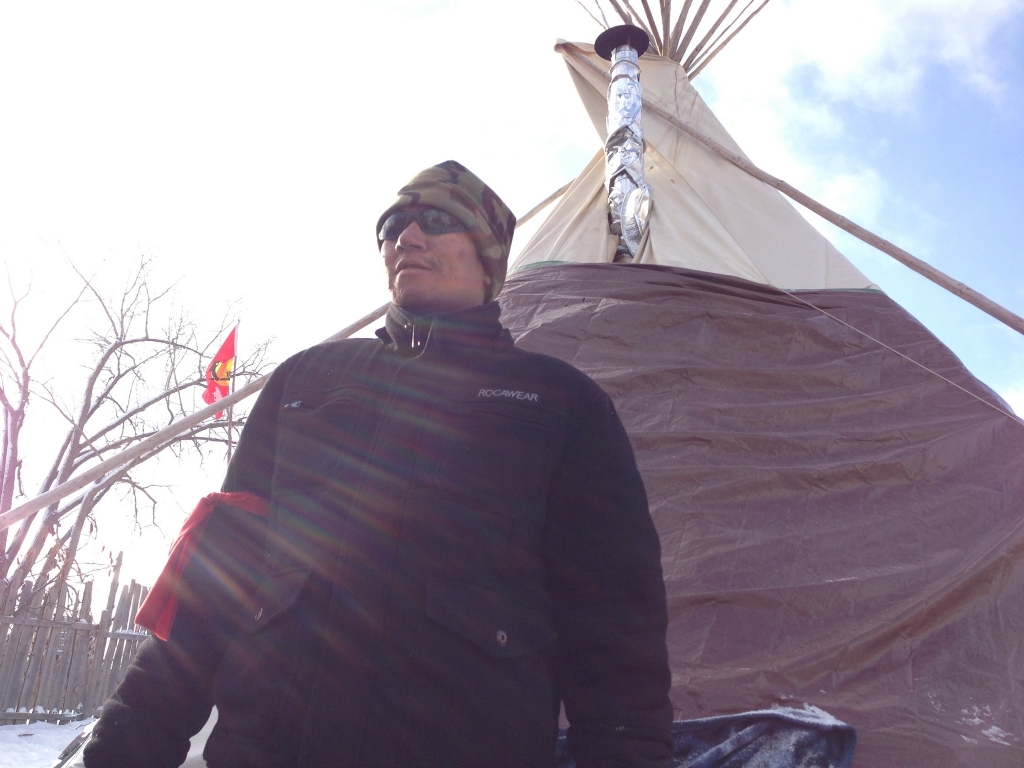 As Theresa Spence continues her sacred fast on Victoria Island, she is aided by washkaybaowuk, the helpers who keep the camp going and protect her.
One of them is Pat Etherington Jr., a 29-year-old Moose Cree member who has been on Victoria Island since Day 4 (Dec. 15) of Spence’s fast.
He said he, his father and older brother originally intended to visit Spence to show their support, especially after Spence had helped him out in the past. But after spending the day on Victoria Island, he felt compelled to stay.
“When I got here, I saw how profound of an impact of what she was doing, so that made me want to stay even more,” he said. “I wanted to help. I told her that night that I decided to stay.”
Thomas Louttit, also a Moose Cree member, was asked by Spence and her spokesperson Danny Metatawabin to help set up camp and start the sacred fire.
“I was given tobacco from Danny and Theresa and they asked me to start the fire and put up the teepee and prepare for her fasting,” the 64-year-old said. “I’ve been here everyday since.”
Being a residential school survivor, Louttit said it pains him to see how First Nations people continue to be treated by the government. While he says he is not political, he supports what Spence is doing for their people’s future.
“I’m thinking of my grandchildren’s future and that’s what I’m here for,” he said.
Chris Coyle of Ottawa is one of several non-Aboriginals helpers on Victoria Island.
Prior to arriving on Day 8 (Dec. 19), Coyle said his experience with First Nations people and issues were “few and far between.” But he heard about Spence’s fast and the need for assistance through Facebook.
Coyle, who is of Irish descent, said it does not matter what a person’s cultural background is if they need help.
“All nations are human,” he said. “The emotions felt by one is felt by another. One of the things our society doesn’t nurture enough is empathy.”
The tasks of the helpers vary, from firekeeping, hauling and chopping wood, raising First Nation flags, or protecting Spence by standing at the teepee entrance.
Coyle has the important task of being the regular night helper. He arrives at the camp in the evening and inspects the fires and wood in the teepee and tents, then tends to them all night.
“My idea is to ensure that everyone gets a good sleep,” he said. “That’s my focus.”
Louttit arrives at the camp in the morning and tends to the sacred fire and helps with any other tasks.
He also welcomes any visitors that come to the camp. And they come from all over. Louttit has met people from “the north, south, east, west, you name it,” including Cherokees, Inuit, and people from Alaska.
“I really enjoy myself being here and share with (the visitors) about myself and how I think about my grandchildren’s future and their children’s future,” he said.
Etherington estimates thousands have come to Victoria Island. He was moved by the ceremonies from all over, including the Blackfoot tribe from the west and the M’kmaqs to the east.
“It’s pretty powerful, their ways,” he said.
And the visitors often line up to see Spence, who usually stays inside the teepee.
Etherington helps with watching the entrance, ensuring a peaceful visit. Or he will sit
inside, acting as a protector. At times, visitors overextend their visit, forgetting that there are other people waiting outside.
“We have a secret little sign (Spence) gives me, and when she does it, that’s when I know to intervene and say, can we wrap this up,” he said, laughing about their secret code.
But there are many times where he has to turn away visitors because Spence needs to rest.
“Sometimes people say they travel four days and sleep in their cars,” he said. “But sometimes she’s sleeping or not seeing visitors. I’m the one who has to tell them. It’s pretty rough. I want them to go see her, but we have to look after her best interests.”
Etherington said there is only one incident where he feared for Spence’s safety. An individual was “aggressive in his approach” and had to be kept away.
“It was a test for us,” he said. “Other than that, it’s very peaceful.”
Coyle, who is committed to stay until “the situation resolves itself,” said he is moved by all the positivity on Victoria Island and is honoured to be a part of it.
“It’s an important moment in time,” he said. “It’s a coming together of all peoples.”
Louttit said he is also staying to the end of the fast.
“That’s the commitment I made when I received my tobacco,” he said.
Etherington is employed but told his supervisor about what he is doing. He was told to call when he is ready to go back to work.
Etherington is not sure when that will be but is committed to staying.
“I’ll be here either when she eats or I’ll be here when we carry her out of the teepee,” he said. “It’s pretty rough when I think about it. There is that fact that she could go. I lost one mother already. I can’t lose another one. If I do, I don’t know what I’ll do.”
But Etherington is in awe of the strength shown by Spence as she goes over a month without eating.
“Her spirit’s strong,” he said. “She’s amazing that woman.”