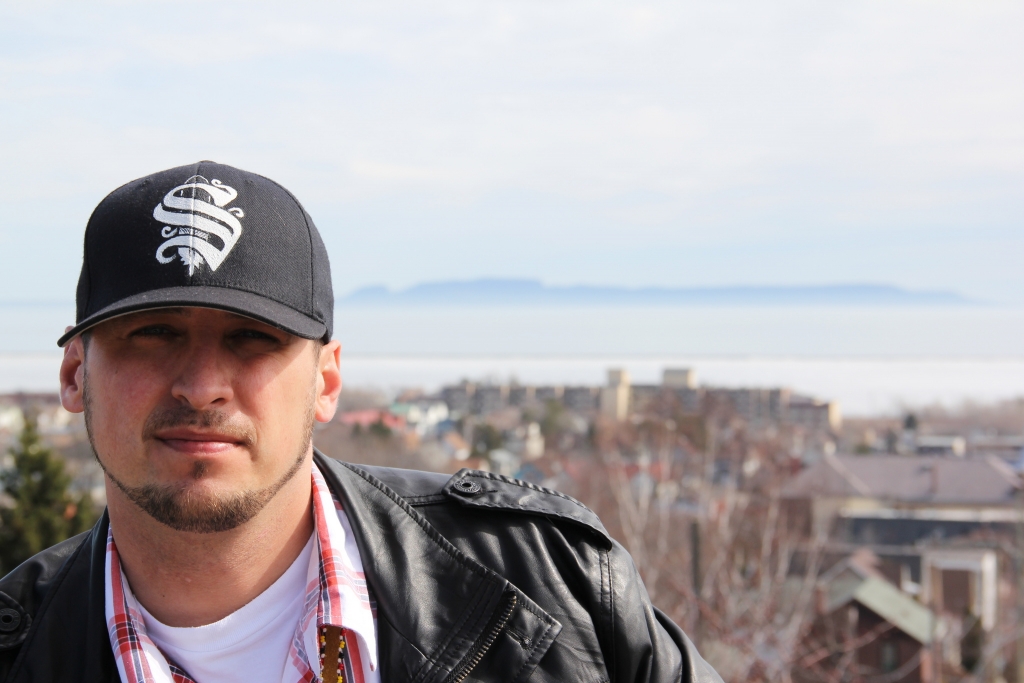 “Keep banging on the hand drum.”
That’s the advice Shibastik offers in his latest video — Hand Drum — after he was asked to write a hip hop anthem for Cree people.
“I thought that was kind of silly to have a hip hop anthem,” said the Moose Cree hip hop artist and workshop facilitator. “Right away I thought that our anthems are our big drum songs and our hand drum songs and our traditional music. So right away that was the chorus I came up with: that we don’t need an anthem, we just have to keep banging on our hand drums.”
Although a prerelease of the Hand Drum video directed by Crystallee Mouland for a Confederation College course has been posted on Youtube at http://www.youtube.com/watch?v=fitQApqKceE, Shibastik said the official version will be released soon.
“We’re going to be shooting the rest of the footage tomorrow,” Shibastik said on March 20. “We’ve got a couple of drum groups coming out, the Little Bear Singers and Shadow Creek, so we’re going to shoot some footage with them.”
Shibastik said the official video is about how Native people need to return to their original ways, their culture and traditions and the seven sacred teachings, noting that powwow music and traditional music has inspired him as an artist.
“Just having all the dancers and the drummers and all the culture and that colour in (the video), I thought it would really inspire pride,” Shibastik said. “A lot of it has been shot already, but we’ll see how it works when we get to editing.”
Shibastik said his first big break in hip hop music was in 2001 when he was featured on an APTN show. He had originally started performing hip hop music at dances in the late 1990s.
“Once I got on APTN, I started getting phone calls and performed at a couple of universities,” Shibastik said, “Carleton University was my first big show — it was cool actually. The Whitetail Cree Singers, we did a workshop together and we each spoke about what we do and then we performed. I did some of my hip hop and they really liked it, but for the last song I actually performed Thunder Cry, one of my more serious songs. I performed it over the group drumming, just kind of like an acapella with a straight drum beat, and the place just had a really good response.”
Shibastik said his style has always been about combining hip hop music with powwow music in a positive way.
“Because it was a positive message rapping about my culture and the powwow, it was a really good response,” Shibastik said.
Shibastik has performed his music and facilitated workshops in more than 40 communities across northern Ontario, Quebec and northern Manitoba as well as one show in Chicago.
“It was crazy,” Shibastik said about the Chicago show in an underground hip hop club. “At first they didn’t know what I was talking about because I was rapping about hunting and ... kind of explaining about where I was from in the verse and we got a really good response. You could tell it wasn’t something they were expecting at all, but they appreciated it even though they didn’t relate to it. Wow, that was cool, it was a really good response.”
Shibastik is currently working on the Healing Through Hip Hop tour, which includes a presentation on media literacy and how everything is not real on television.
“I just let them know television is not all it’s cracked out to be,” Shibastik said. “You’ve got to stay true to yourself and the seven sacred teachings are really a good guideline to that.”