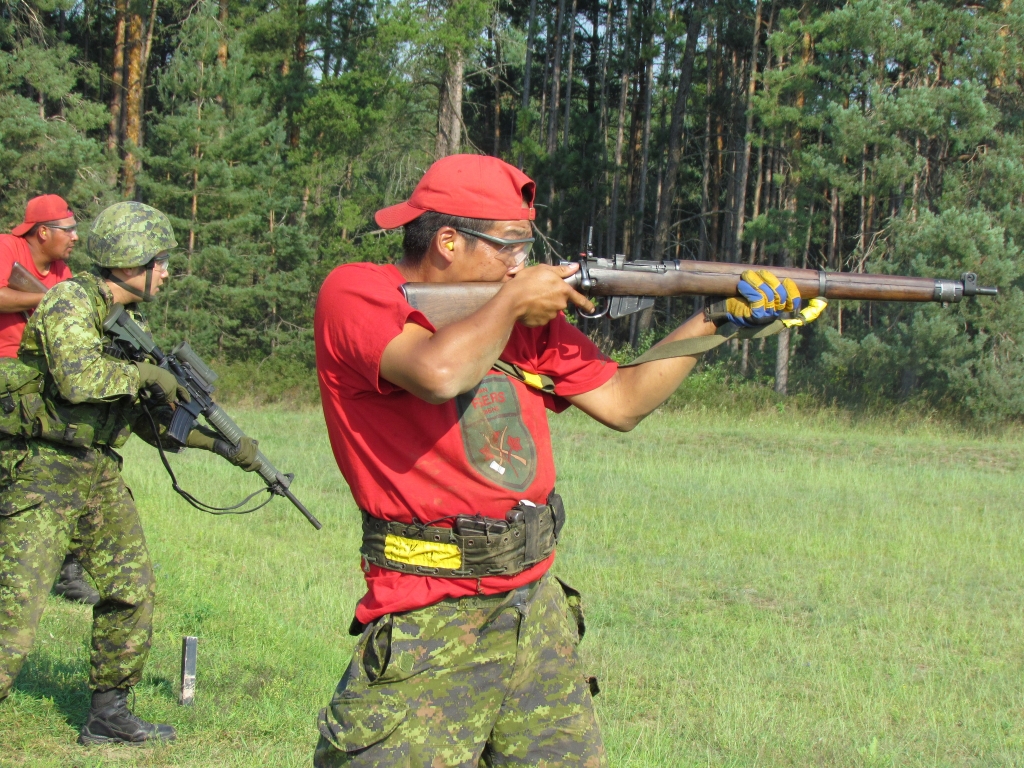 Canadian Ranger marksmen from across northern Ontario won top honours at the Ontario Rifle Association provincial championships at Canadian Forces Base Borden.
Ranger Simon Shewaybick of Webequie, won the Ontario championship in the individual bolt-action rifle category and Sergeant Matthew Gull of Peawanuck won the trophy for the highest scoring shooter competing in the championships for the first time. All the Rangers competed using standard issue, .303-calibre Lee-Enfield rifles.
The 15-member Ranger team, who came from 10 communities, won 17 championship medals competing in a variety of contests held over two days against teams from the Canadian Army, Royal Canadian Air Force, and top civilian shooters.
They shot at still, moving and briefly visible targets at distances ranging from 600 metres to 10 metres. They shot while standing, kneeling and lying prone on the ground. They frequently had to run 100 metres between shots. In one rapid-fire contest they had to fire 10 rounds in 10 seconds.
“They performed very well,” said Warrant Officer Gary DesRoches, an army instructor and the team captain. “I heard nothing but compliments from everyone because they were very professional and performed very well against some of the best shooters in Ontario.”
The Rangers received a week of intensive training at Borden prior to the contest.
“They were taught to fire by the Elders but the science of shooting was never put into the equation,” said Warrant Officer Gary DesRoches, an army instructor. “Here they learn how to really shoot. They learn how to shoot in different elements, like wind, rain, the position of the sun, heat mirage. They started out extremely poorly. I was kind of upset at first. But they learned and they did very well. You can see the smiles on their faces.”
Sergeant Gull agreed. “Let’s put it this way,” he said. “I was correct in a lot of ways in how to shoot before I came here. I thought I knew how to shoot. But this instructor knows a lot. He said: ‘What do you think you know? You know nothing.’ So I listened to him.”
Sergeant Gull said the training “fine tuned” his shooting techniques by teaching him about the science of shooting, including breathing, body positioning, and finger pressures. At the end of it he was able to put all his shots into the center of the target at 600 metres.
“I impressed myself at what I did,” he said. “I’m certainly going to pass on what I learned here to the rest of my patrol in Peawanuck.”
The Rangers have participated in each of the last annual provincial shooting championships. “You can see the senior Ranger shooters’ scores getting progressively better,” said Tim Kagetsu, the match director. “You can see the senior Ranger shooters passing their knowledge and experience on to the new shooters. I’m glad to see them here.”
The Rangers collected championship medals in individual and team categories in the bolt-action rifle matches. They also won the falling plate team contest, in which competitors have to shoot and knock over metal plates after running 100 metres.
Sgt. Peter Moon is the public affairs Ranger for 3rd Canadian Ranger Patrol Group at Canadian Forces Base Borden.