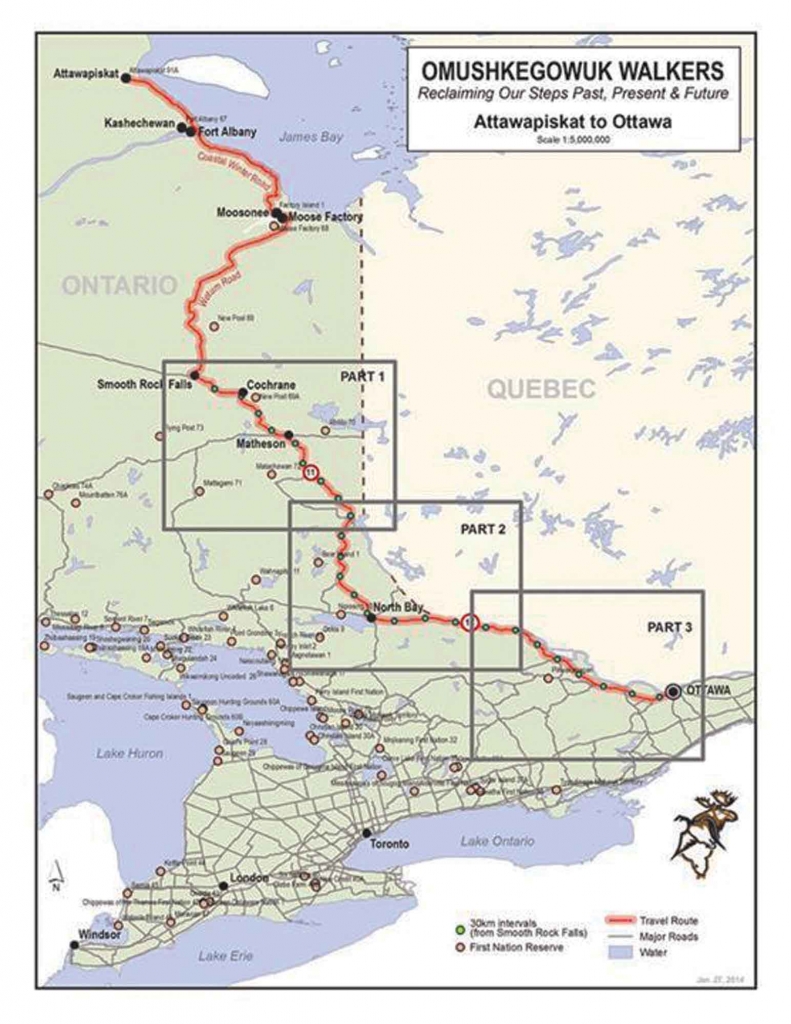 The three walkers that departed Attawapiskat early last month now number 12 walkers as they pass New Liskeard, Ont. on their journey to Ottawa.
The walkers, who named their journey Reclaiming Our Steps Past Present & Future, are also to as the Omushkegowuk walkers and have been joined by members of Kashechewan and Moose Cree First Nations. Members of Attawapiskat and Fort Albany originally began the walk.
The walkers reached Cochrane – located near Taykwa Tagamou First Nation – on Jan. 27 where they walked to city hall and were presented with gifts from the town council.
“After that, we proceeded to the (Ininew) Friendship Centre,” walker Danny Metatawabin wrote in Facebook update that day. “In the evening, they had a feast for us in our honour, and at that time as well, (we) explained to the people in attendance why we needed to sent a message to Canada and to the Provincial Governments. It was a very good day and evening.”
As of Feb. 3, the walkers are heading south down Highway 11 towards North Bay, Ont. At that point, they will proceed onto Highway 17 to Ottawa.
According to Metatawabin, they estimate they could reach Ottawa by late February.
The walkers try to average 30 kilometres a day, and throughout the journey, various people have joined them for either a day or a leg of the walk.
The 12 walkers are: Metatawabin, Paul Mattinas, Brian Okimaw, Albert Iahtail, Remi Nakogee, Wayne Koostachin, Gordon Hookimaw, Edmond Etherington, River Metatawabin, Chad Friday, Jean Sutherland, Pat Etherington Jr. and Morgan Moar. Two of the walkers are teenagers, aged 14 and 18.
The walkers also gained two helpers in Pat Etherington Sr. and Frances Whiskeychan.
All three Etheringtons and Whiskeychan were helpers on Victoria Island during Attawapiskat Chief Theresa Spence’s fast last winter and had walked from Cochrane to Alberta last summer.
Metatawabin was Spence’s spokesperson during her fast and said this walk arose out of frustration following a year of no changes to First Nations issues and no follow up to the commitment signed by First Nations and federal opposition leaders last year to end the fast.
The Omushkegowuk walkers have received moral and financial support from the Mushkegowuk communities they passed through, including feasts and honouring ceremonies. This includes the communities of Attawapiskat, Kashechewan, Fort Albany, Moosonee, Moose Cree and Taykwa Tagamou. They have also received support from Wahgoshig, Beaverhouse and Matachewan First Nations as they passed through their territory.
As they left their James Bay homelands, the walkers are seeking public donations for the remainder of the journey.
Donations can be deposited at any Royal Bank of Canada (RBC) branch. Transit: 05112. Account number: 1010669.
Various First Nations leaders have announced their support for the Omushkegowuk walkers.
In addition to calling for public donations, Ontario Regional Chief Stan Beardy applauded the purpose of the walk.
“It is with great strength and commitment that these walkers are continuing their pledge to bring an awareness of the chronic underfunding in our communities for basic human needs such as clean water, proper housing and healthcare needs,” Beard said in a release. “As leaders we feel their frustration in dealing with a government that doesn’t listen to our concerns and with the widening poverty gap between mainstream society and the First Nations, now is the time to listen and to act. Our thoughts and prayers are with them on every step of their trek to Ottawa.”
Mushkegowuk Grand Chief Stan Louttit called on First Nations leaders and the general public to generate a “treaty movement.”
“Ignoring the Treaties, tells us that the government does not take Treaty relationships and agreements seriously and they wish that someday, these issues would fade away,” he said in a release. “But I am telling you right now, that the Treaty movement will continue and we will make the Treaty issue an agenda item in all meetings with the government and we will continue our actions into the future.”
Despite facing the elements and enduring physical hardship, Metatawabin said the Omushkegowuk walkers find the journey to be “spiritual, meaning and empowering.”
“We pray as we walk, we encourage each other as we walk,” he said in a media release. “We think about and pray for our children and their children as we walk, we feel the presence of our Creator and ancestors as we walk, we are receiving very powerful messages as we walk, and we need justice, equality and fairness as First Peoples of this country now.”
The journey can be followed on their Facebook page, which receives daily updates from Metatawabin: https://www.facebook.com/pages/Reclaiming-Our-Steps-Past-Present-Future/...