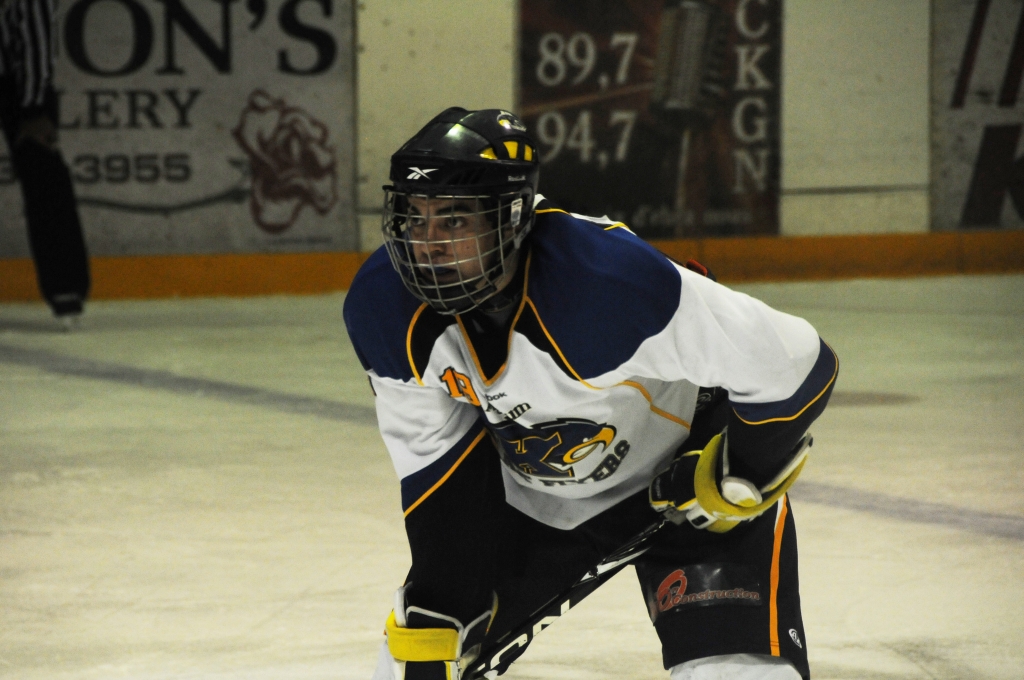 Moose Cree’s Sheehan Moore was six or seven when he first learned to skate.
“My grandpa had an outdoor rink I used to skate on all the time,” the 16-year-old recalls.
When he was 11, Sheehan moved to the Cree Nation of Mistissini in Quebec where his mother found employment. He played in rec leagues there until he was 13, when his cousin recommended he try out for the Sudbury Wolves of the Northern Ontario AAA Bantam Hockey League.
“I wasn’t really expecting to make the team, but I got selected to play and they asked if I wanted to play, so I said yeah,” Moore said. “I moved in with (my cousin) and my uncle.”
Making the move to Sudbury away from family proved to be a challenge for Moore.
“It was a big change for me because the year before I lived in Quebec,” he said. “I guess I got homesick a few times in Sudbury. I talked to my mom a lot (on the phone).”
After a while, Sheehan got sick of the city. When a friend suggested he try out for Kapuskasing Agrium Flyers of the Great North Midget League, he jumped at the chance.
“It’s a lot closer to Moose Factory,” he said. He also reunited with four friends whom he grew up playing with along the James Bay coast. Also on the Flyers’ roster were Braden and Cameron Etherington, and Brennan Nesrallah of Moosonee; and Tanner Cheechoo of Moose Factory.
When Moore, a defenceman, tried out for the Flyers, one aspect stood out for head coach Glen Denney.
“One of the biggest things I can say about Sheehan is his ability to skate,” Denney said. “For me, his agility and flat-out speed and power on a pair of skates is pretty phenomenal.”
Moore’s favourite NHL player is defenseman Erik Karlsson of the Ottawa Senators, who currently leads all defensemen in points. While Sheehan says he likes to use his speed to carry the puck and join the rush like Karlsson, he considers himself more of a defensive defenseman and says he is often on the penalty-kill.
His skillsets aside, Denney said there was a bit of an adjustment for Sheehan to play on his team.
“(There are) new systems, new guys around, and a new community as well, so it took him a while to get used to it,” Denney said.
There were also adjustments to be made off the ice. The Flyers often hit the road for games, more than the other teams, Moore believes.
“I was trying to balance school and hockey,” he said. “Sometimes I’d ask the coach to not go to practice, like if I had test coming up or if I missed a day or two.”
After 22 games, Moore had seven assists but had yet to score any goals. It was frustrating for the defenseman, especially with his teammates teasing him.
In a Dec. 16 game against the New Liskeard Cubs, the Flyers were leading 3-0 when Moore carried the puck in the Cub zone and went around a defender. He fired a shot that when off a defender’s shinpad. The rebound came back to Moore and he “swung at the puck.”
“I wasn’t even sure if I scored,” Moore said. “I just hit the puck and went back and everyone came to me, ‘Oh, you scored!’”
Denney recalls that moment from the bench and felt relief for his defenceman.
“He finally buried that puck, and a lot of guys go out there cheering and yelling, for him he was just so happy to get the monkey off his back,” Denney said. “I was so proud and so happy that he got that. And once he did, that comfort level and trust in himself and self-confidence got so much better.”
In the end the Flyers finished third in the league with a 25-7-1-1 record. In the playoffs, they swept the Timmins Majors in three games in the first round before being eliminated by the Sault North Stars in four.
Moore has mixed feelings on how his season went.
“I wasn’t really at my best, but I had a lot of fun,” Sheehan said. “That’s all that matters.”
Sheehan’s perception of himself is something Denney believes he can work on.
“Really, for Sheehan, I think the biggest thing is believing in himself,” Denney said. “A lot of young men are hard on themselves, and he was really hard on himself, and that’s one of the things we worked on this season.”
In the long-term, Moore aspires to play as high as the Junior B level in hockey so he can focus on education.
“Probably after midget, I’ll just go to school,” he said. “I’ll probably go into one of the trades.”