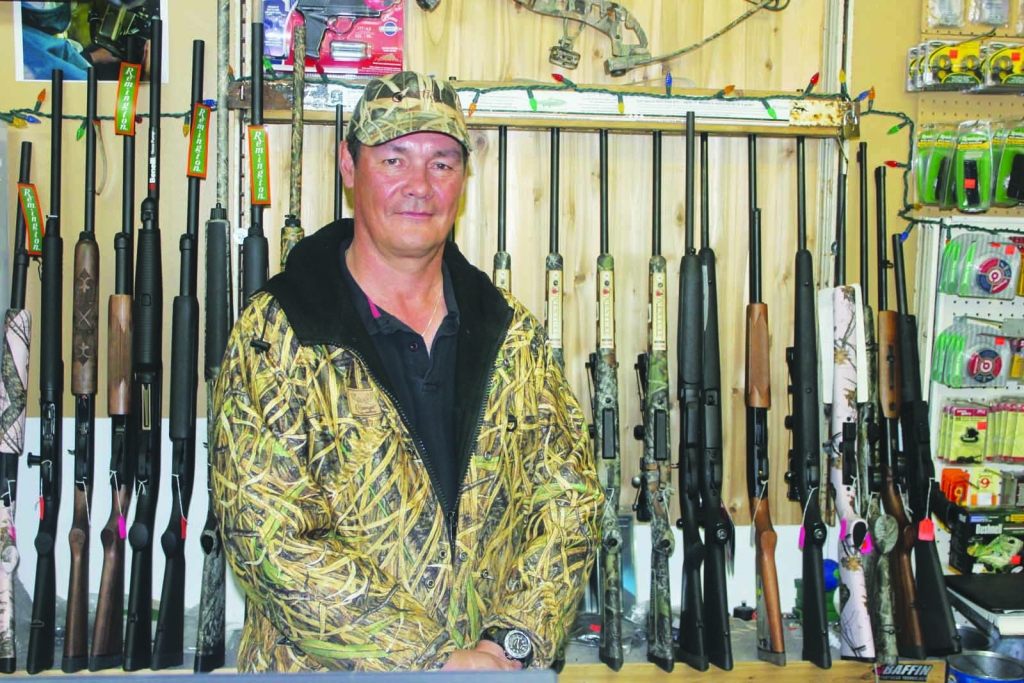 James Bay Outdoors is a sporting goods store that grew out of a need observed by a Moosonee resident.
Gordon Kataquapit of Moose Cree First Nation has been an avid hunter since he was 16 and saw a growing need for an outdoors store.
“I think there was a need of an outdoors store here, and we didn’t have anything here really,” the 54-year-old said. Though there was a store that offered the basic hunting necessities, Kataquapit felt it was not enough.
“We needed more decoys, ammunition, tents, tarps, and clothing. Things like that.”
It was then that Kataquapit began to come up with a new outdoors store that offered more hunting supply options for hunters in the James Bay area.
He began to draft a business plan, which took two years to complete a rough draft. Using a grant provided by Indian and Northern Affairs Canada, Kataquapit hired a consultant to polish his business plan. With his final draft in place, he was able to receive a grant from Moose Cree First Nation as well as acquire a business loan from Wakenagun Community Future Development Corporation.
Then in July 2004 - about 10 years after Kataquapit got the idea for a store - James Bay Outdoors held its grand opening. Like most businesses, it had modest beginnings. The initial location of the store was 200 square-feet with enough room for one shelf. A year later, they moved into a larger location, followed by another location two years later before settling into their current space of 1,200 square-feet.
“It was tough,” Kataquapit said of those early years. “We were not really out there yet. No one knew about us.”
But Kataquapit and his business partners persevered by putting up signs and flyers, and the name spread by word-of-mouth.
Now James Bay Outdoors has regular customers locally and from up the coast, with customers often requesting special orders.
Kataquapit said business nowadays is somewhat steady compared to previous years.
“It has in ups and downs for certain times of the year,” he said. “Right now, it’s good. December to April is really good, because it’s goose hunting season.”
Business slows in the summertime, when the story offers fishing tackle, rods and worms. It picks up again in the fall for moose hunting, as well as goose and duck hunting.
“It’s a cycle,” Kataquapit said.
The best selling products are ammunition, guns and decoys.
“There’s always people looking for different or better decoys,” he said. Each year, Kataquapit orders a new model of decoys. This year, the Big Foot goose decoys proved to be a big seller.
“They sell very good and work well in the field, because they look so real,” Kataquapit said. “You gotta trick those geese so they come in close.”
Another product that Kataquapit tries to provide is camouflage wear.
“Canada doesn’t have as much camouflage wear as Americans do,” he said. “So we have a variety of coats and parkas.”
Running a business is hard work, Kataquapit said, but it is not something new to him.
When he was in Grade 8, Kataquapit dropped out of school to work at Butcher Fuels in Moosonee. But when he was 34, he realized the importance of education and took an upgrading course at Canadore College in North Bay to gain his high school diploma. He then took an aviation program that enabled him to fly fixed-wing aircraft. He is also trained as a heavy-equipment operator and mechanic, and worked in the trade for 10 years prior to opening the store,
Kataquapit continues to make traditional hunting a big part of his life.
“I enjoy hunting in the spring, moose hunting in the fall, and snow goose hunting,” he said.
“There’s always wild meat in the freezer.”
Kataquapit said he takes pride in providing hunting equipment to fellow hunters and plan on expanding his services.
“We were thinking of upgrading to workwear for the working people in town,” he said. “We hope we can continue to grow.”