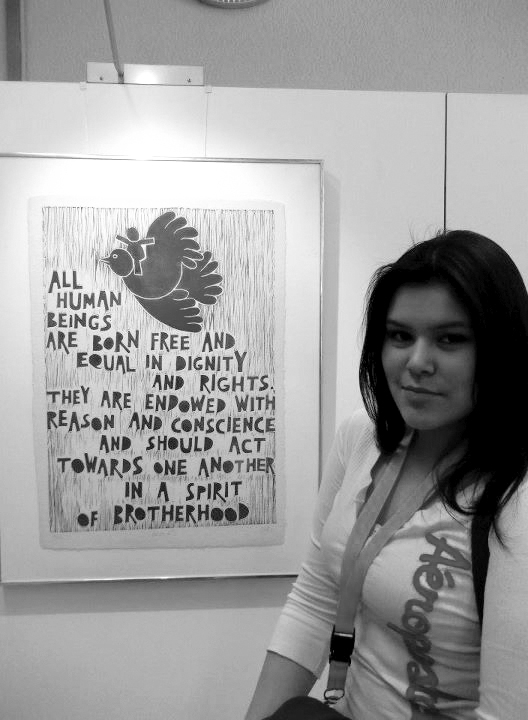 Sixteen-year-old Chelsea Edwards of Attawapiskat First Nation updated her Facebook from halfway around the world on Feb. 6.
“History is made,” she wrote from Geneva, Switzerland. “Watch out Harper and Duncan, you’re both out of excuses now that they’ve heard our voices.”
Edwards was among six First Nations youth ambassadors who traveled overseas to speak to the United Nations (UN) Committee on the Rights of the Child about the inequalities facing Aboriginal youth in Canada.
A spokesperson for Shannen’s Dream – a campaign pushing for “safe and comfy” schools for all First Nations across Canada – Edwards told the UN committee about the inequalities in education facing her people.
She told the committee about the diesel contamination of the J.R. Nakogee Elementary School in her community and its closure 12 years ago; her experience in attending classes in portables that were cold, infested with mice and had toxic smells; the Canadian government’s repeated and broken promises of a new school; and that 47 First Nations are in need of educational facilities, not including renovations.
She also told them about 15-year-old Shannen Koostachin, Edwards’ friend who initiated the biggest letter-writing campaign in Canada to urge the federal government to build Attawapiskat a new school, and about her untimely death in 2010 and the campaign named in her honour.
The meetings were closed and private, and each youth ambassador was given two minutes to talk about their issue related to child welfare, health care or education, followed by a lengthy question and answer period.
Edwards could sense the shock in the committee members following her presentation.
“I swear we’ve made one of the members of the committee tear up,” Edwards wrote on her Facebook following the meeting.
Edwards said she wasn’t nervous prior to the meeting, despite the international stage.
“Because they’re just regular people, just like us,” she said.
With their voices heard, Edwards hopes the UN will urge the Canadian government to fulfill its responsibilities to the First Nations people in education by building schools.
“So that First Nation youth can be in an environment they’ve grown up in, “ Edwards said, “instead of going away from their families, their traditions and culture.”
This is what Edwards has experienced after doing her first year of high school in Attawapiskat with its substandard curriculum and facilities. She moved to Cochrane then to Timmins to attend high school while her family stayed behind.
In a display of dedication to her education, when a tired and jetlagged Edwards returned to Timmins on the morning of Feb. 9, she attended her afternoon classes and hit the books that evening.
Edwards appreciates the opportunity to speak to the UN about her people’s issues.
“I felt very fortunate that my own voice gets to be heard this way, but I know that I was representing a lot of First Nations youth in Canada so I’m pretty proud of all of us (ambassadors) for taking advantage of this opportunity.”
Edwards received praise from First Nations leaders for her display of leadership.
“Chelsea is the voice and spirit of our youth who has been fortunate enough to share her story with the United Nations and how all our First Nations youth been affected by basic human rights inequalities,” Nishnawbe Aski Nation Grand Chief Stan Beardy said in a press release. “More of our youth need to be heard on the international stage. Our youth are facing daily challenges in the remote north, but opportunities like this allow them to share their hopes and dreams for a brighter future with the world.”
Attawapiskat Chief Theresa Spence also praised Edwards.
“Chelsea is the ideal youth to take the torch for the Shannen’s Dream as she is a role model herself and left her home community to pursue her educational dreams,” she said. “I am very proud of her.”
Edwards is taking the expectations of being a role model and leader in stride.
“It gets kind of pressuring at times,” she said, “but I just do the best that I can and do what pleases me and be proud as an individual.
“At one point, someone had to tell me that I had to remember to be me: be Chelsea. And to accept mistakes and if people are watching, let them watch. That’s how they learn.”
The five other youth ambassadors are: Kendall White, 17, of Temagami First Nation in Ontario; John-Paul Chalykoff, 24, of Michipicoten First Nation in Ontario; Madelynn Slade, 22, of the Michel Cree in Alberta; Helen Knott, 24, of Prophet River First Nations in British Columbia; and Collin Starblanket, 15, of Star Blanket First Nation in Saskatchewan.