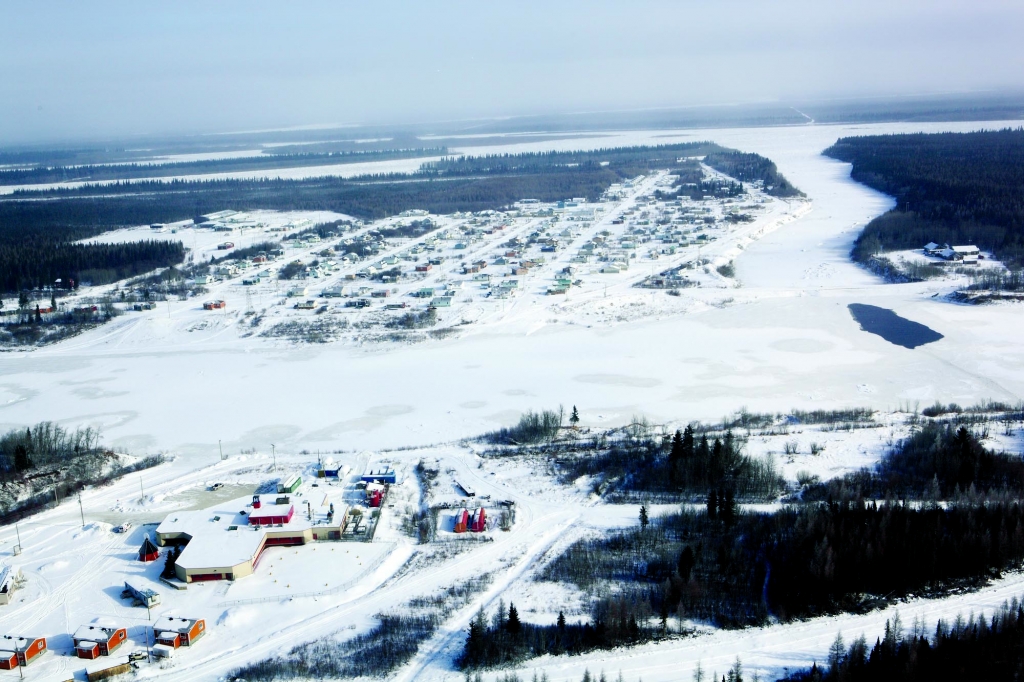 While Fort Albany attempts to return to “normal” for the first time in two weeks thanks to subzero temperatures that have stalled the early spring thaw, the threat of flooding still exists as the community awaits for warm weather to return.
Brent Nakoochee, the community’s floodwatch coordinator, said water levels have dropped slightly in recent days, but the community remains on standby as they wait for the rivers to thaw.
One particular river concerns Nakoochee. The Stooping River, located near the community, has an ice jam about 12 miles in length.
“If that breaks, it’ll affect our community,” he said. “The water could rise again on the causeway.”
The causeway, which separates the mainland from Sinclair Island and is drivable year round, has flooded. As a result, the residents on the island have no immediate access to the grocery store, hospital and airport located on the mainland.
Instead, the First Nation is providing helicopter shuttles between the island and mainland thanks to additional fuel it has received, which Nakoochee believes is from Aboriginal Affairs and Northern Development of Canada as part of Fort Albany’s emergency situation, which was declared on March 24.
Since April 2, residents on Sinclair Island can fly to the mainland to go to the grocery store, go to work, attend appointments at the hospital or catch flights at the airport. If the helicopter continues its regular shuttle service, Nakoochee estimates the fuel will last at least 15 days before it will need more.
While the community organized boats to ferry residents on the causeway as it tried to figure out its helicopter fuel situation, it has since stopped the boats and advised residents not to go on the water since water levels could change at any moment.
“We heard that some people want to start a boat taxi,” Nakoochee said. “If they really want to use a boat, it will be at their own risk.”
Meanwhile, Kashechewan residents who were evacuated due to the threat of flooding have returned home after the First Nation lifted its state of emergency on March 31.
Deputy Chief William Sutherland said since the Albany River has opened up for five miles and water levels have lowered, the threat of flooding no longer exists for the community this spring.
“We had five Elders go up on the chopper to look up the river,” he said. “And a decision was made based on the Elders that the river is safe and there’s no more water coming down.”
When Kashechewan declared a state of emergency on Mar. 24, it evacuated 270 residents considered vulnerable, which included Elders, children and those with medical needs. A week later, they returned home from Kapuskasing and Wawa, Ont.
The evacuation and repatriation of the residents were coordinated by Emergency Management Ontario (EMO) and the Ministry of Natural Resources.
EMO spokesman Greg Flood said they are continuing to assist the community in monitoring the river as well as any future evacuation efforts this spring.
On March 31, Fort Albany received food from the Cochrane Food Bank that was transported to Moosonee by Ontario Northland Railway as part of relief efforts since most residents could not cross the causeway at the time due to limited helicopter fuel.
Fort Albany and Kashechewan declared an emergency on March 24 as warm weather brought an early river breakup season and high water levels.