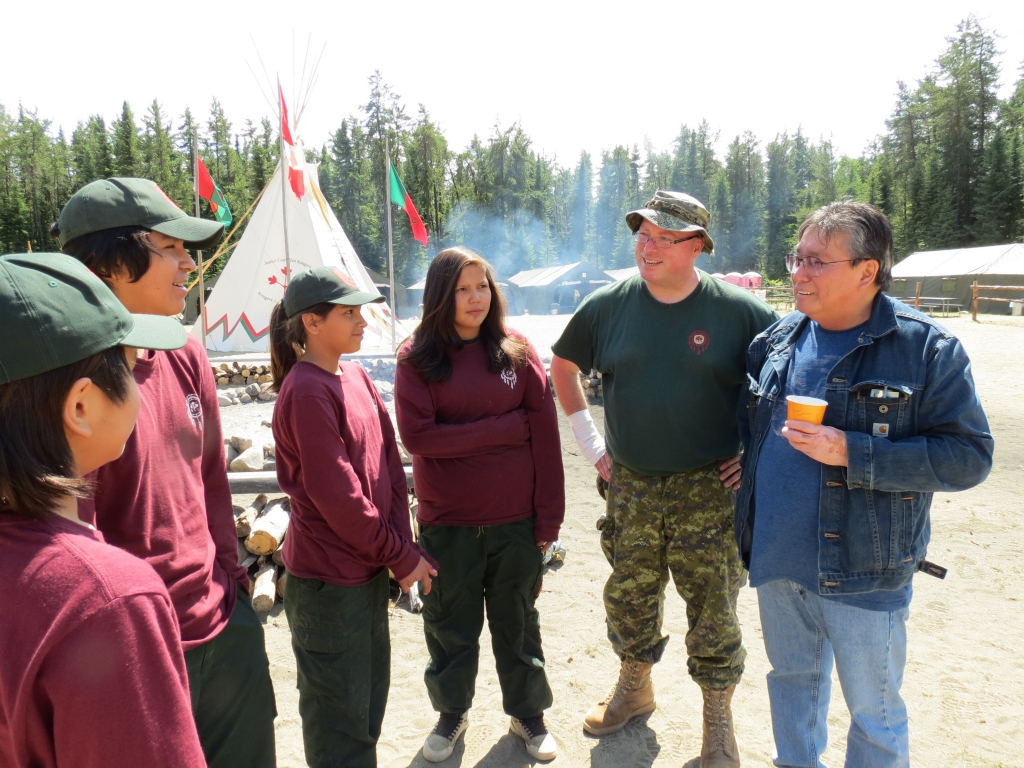 The Canadian Rangers have completed a four-week long operation that provided crucial emergency help to a small, isolated First Nation in Northern Ontario during a major youth suicide crisis.

In an unprecedented move, the Canadian Army sent the Rangers, who are part-time army reservists, to the community to conduct night patrols and a range of day time activities for the community’s troubled youth.

“There were no suicides after the Rangers arrived,” said Chief Brennan Sainnawap. “There were attempts but no suicides. The Rangers coming in helped our staff on the ground and the whole of the community to have a chance to rest. We were traumatized and exhausted. The Rangers gave us breathing room.

”Having the Rangers really helped a lot and we are grateful to the army for sending them to help us. They did a very good job.”

Wapekeka, an Oji-Cree community with a population of about 400, located about 600 kilometers north of Thunder Bay, declared an emergency on June 19 and asked for outside government help after the third suicide of a 12-year-old girl this year and an unprecedented epidemic of attempted youth suicides, including suicide pacts.

The army responded by authorizing Canadian Rangers to go to Wapekeka to help. The Rangers, who were all Indigenous, went by road from nearby Kitchenuhmaykoosib, and flew in from Muskrat Dam, North Caribou Lake, and Sandy Lake.

“Those first five days we were there were critical,” said Lieutenant-Colonel Matthew Richardson, the army officer commanding the Rangers of Northern Ontario. “From reports I’ve had it’s clear that if we weren’t in Wapekeka there would have been dire consequences.

“We were not there as police officers. The Rangers are not police but they provided a visible presence. We observed and reported when we saw something that needed to be dealt with. Our focus was on engaging with the kids and giving them an approachable and friendly adult that they could talk to, but in a uniform that identified who they were.”

The Rangers frequently found and removed suicide paraphernalia during their patrols. They also encountered many disturbed youth and referred them to specialized counsellors. Some of the youth had to be flown out of Wapekeka for emergency treatment.

The community now has a range of help in it from a number of outside agencies and the Rangers have ended their emergency response to the crisis, Colonel Richardson said. “But the army is not walking away. The community still has our support.”

The army is conducting a recruiting campaign to provide a significant Ranger presence in Wapekeka. It is also encouraging the community’s youth to join the Junior Canadian Rangers, a culturally appropriate program run by the army for boys and girls aged 12 to 18 in remote and isolated communities across the North.

Chief Sainnawap spent a day at Camp Loon, an annual advanced training camp for Junior Rangers, held in the bush north of Geraldton. What he saw, he said, impressed him greatly and convinced him the Junior Canadian program would help the troubled youth of Wapekeka.

As part of a trial, seven at-risk youth from Wapekeka were made Junior Rangers so they could attend the eight-day camp, where Chief Sainnawap met some of them.

“What really impressed me was the genuine smile that they had when I met them,” Chief Sainnawap said. “That surprised me. Before that, at home in Wapekeka, their smiles were strained. But to see them smile without strain, because of the Junior Rangers, that was priceless.

“I’d have every kid in Wapekeka at Camp Loon if the Junior Rangers can get that kind of smile. This is an impressive program. It’s what we need for our youth. They need the supportive structure and discipline of the Junior Ranger program. That’s something we are lacking back home.”

(Sergeant Peter Moon is the public affairs ranger for the 3rd Canadians Ranger Patrol Group at Canadian Forces Base Borden.)