CANADIAN RANGERS FLY TO KASHECHEWAN TO ASSIST IN EMERGENCY EVACUATION 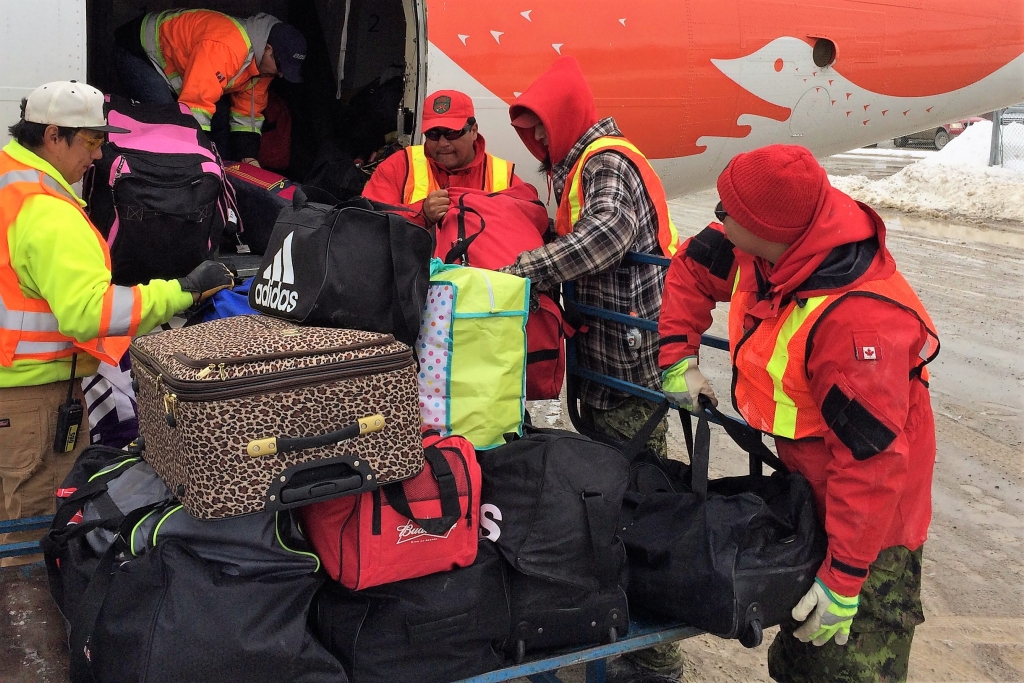 A small group of Canadian Rangers are providing key assistance in the evacuation of Kashechewan First Nation, an isolated Cree community which faces potential flooding from the Albany River in Northern Ontario.

The team is made up of local Canadian Rangers from Kashechewan and Rangers from three other Northern Ontario First Nations – Constance Lake, Fort Albany, and Fort Hope.

The Rangers, who are part-time army reservists, became involved after the province of Ontario asked the federal government for military assistance in evacuating Kashechewan after the First Nation declared an emergency. In the past ice jams have led the river to overflow its banks and cause serious damage to the Cree settlement on the James Bay coast. It has a population of about 1,700.

Several hundred have been flown out to motels in the small southern communities of Kapuskasing and Smooth Rock Falls, where they are fed and provided with a range of emergency supplies until they can fly home once the river levels return to normal. The first evacuees flew south on Sunday. They fly in small passenger planes with up to 50 seats. As the evacuation numbers grow additional accommodation will have to be found for them in other southern communities.

“The Canadian Rangers are providing assistance that’s allowing other evacuation operations to take place,” said Warrant Officer Carl Wolfe, a Canadian Army instructor, who flew to Kashechewan to work with the Rangers. “Our first goal, obviously, is to ensure the preservation of human life. We’re here to make sure the area is safe.

“We’re conducting reconnaissance and we’ve set up an observation post on the river to monitor the water and ice levels. We always have eyes on the river. That allows people in the community to sleep at night and prepare for evacuation during the day without having to worry about the river.

“We’re just finishing up the stage one evacuation which involves the elderly, the sick and injured, and children. We are ensuring their safety around the aircraft at the airport and we are helping with their baggage.”
Many of the Rangers are on duty for up to 14 hours a day. Those who do not live in Kashechewan are sleeping and eating in the fire hall, which is also being used as a temporary military command post.

Brandon Spence, Kashechewan’s fire chief and emergency co-ordinator, said the Rangers’ presence increases in importance as more of the community evacuates. “They are doing essential jobs for the community and they are here to help,” he said. “They are not leaving.”

Spence is a Canadian Ranger and a master corporal with the Kashechewan Ranger patrol. “But that’s not my job at the moment,” he said. “I’m the emergency coordinator now and I’m just glad the Rangers are here and so is the community.”

Lieutenant-Colonel Matthew Richardson, commanding officer of the 3rd Canadian Ranger Patrol Group, which commands the Rangers in Northern Ontario, said he is pleased with the way the  Rangers are supporting the evacuation.

“Things are going well and we are glad to be able to help the community in a time of need,” he said. “When the province made the request for military assistance and it was approved we were there in a day. The Rangers bring unique skills to the table in a situation like this. Most are First Nations themselves and they are organized and able to work as a team. They are able to patrol the river and they can sustain themselves over a period of time.”

Additional Rangers are on standby across Northern Ontario and ready to fly to Kashechewan if the situation worsens and the evacuation has to be speeded up, said Warrant Office Wolfe.

A number of families are engaged in the spring goose hunt and are at isolated hunting camps. Many are being flown back to Kashechewan by helicopter so that they can be evacuated.