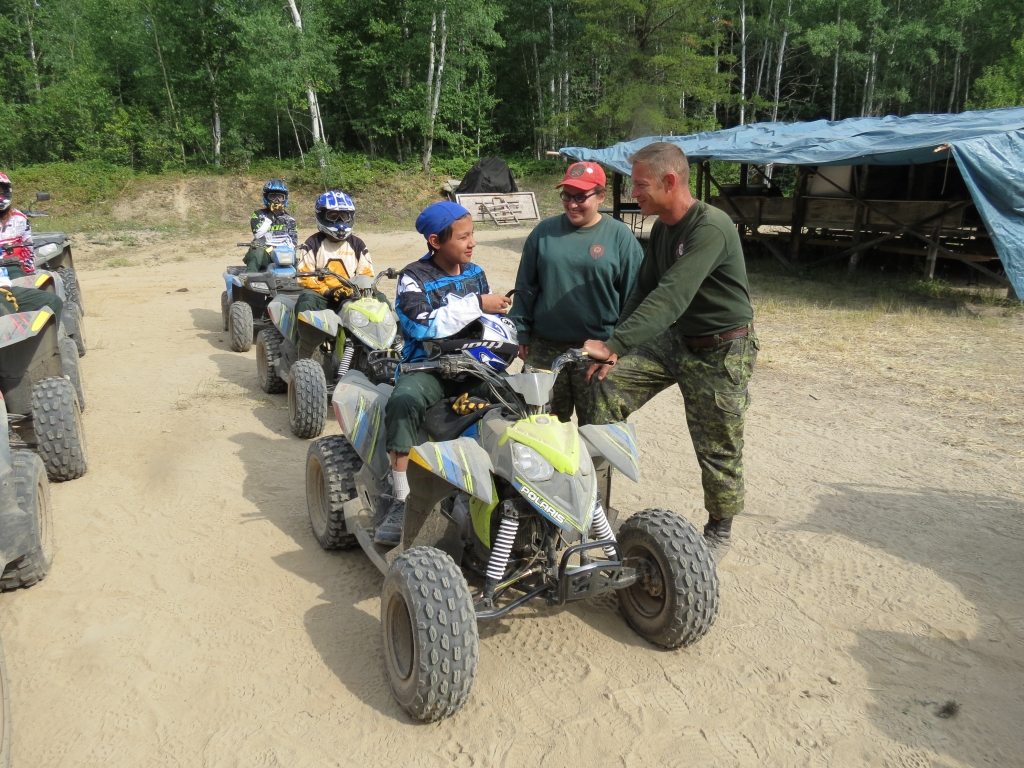 Learning to drive an all-terrain vehicle safely is done at one of the most important training sites as well as one of the most popular at Camp Loon, an advanced training camp for Junior Canadian Rangers.

The camp, held in the bush north of Geraldton, provides eight days of training for the Junior Rangers, who are members of a national Canadian Army program for boys and girl aged 12 to 18 in remote and isolated communities in the North

“ATV training for the Junior Rangers is required because in the North there are a lot of First Nations in which people overload their machines and drive them in conditions in which they are not meant to be driven,” said Captain John McNeil, the army officer commanding more than 1,000 Junior Rangers in 23 First Nations across the Far North of Ontario and the camp commandant. “The result is a lot of injuries and even unnecessary deaths. There is no formal safety training in the communities. Children just get on a machine and drive it.

“You see up to six people on a machine meant for one or two and if it is pulling a trailer there might be small children bouncing in the trailer.

“The benefits of an ATV should not outweigh the safety of the individual. Having Junior Rangers at this camp gives us an opportunity to instill in them safe riding skills for when they go back home.”

The day-long course at the camp is taught by an army instructor and trained Canadian Rangers.

“I just got on an ATV at home and rode it when I was young,” said Master Corporal Sherrie Kakekaspan, a Canadian Ranger from Fort Severn First Nation on Hudson Bay, one of the ATV instructors. “Then I took an ATV course at (Canadian Forces Base) Borden and I learned all the things I did wrong. There’s no training in how to ride an ATV at home and no one wears safety equipment. You’ll sometimes see seven people on a machine. Accidents happen in Severn and lots of other communities.”

At Camp Loon Junior Rangers learn how to check their machines for mechanical and other defects before they ride them. They learn to wear gloves, long sleeves, long trousers, shoes, eye protection, and, most importantly, a helmet.
The highlight of their day is a challenging cross-country ride that takes them more than an hour to complete as they negotiate a number of obstacles in challenging conditions.

Chad Bottle, a 14-year-old Junior Ranger from Lac Seul First Nation, said he was amazed by how much he had to learn about safety before he was allowed to get on an ATV. “It was my first time riding one,” he said. “It was kind of scary. But then it was cool because I was able to use what I had learned and I had lots of fun on the ride and I didn’t hit anything.”

Sergeant Kevin Meikle, the army instructor, said he hopes the Junior Rangers can take what they learn home with them and pass it on. “I’m trying to break some of the bad driving habits I see in their communities. I know I can’t change everything but if I can get people thinking about ATV safety I might prevent a few injuries, and even a death, and I’d be happy with that.”

The training for the youngest Junior Rangers is only possible because of the support of Polaris Inc, a leading manufacturer of ATVs. The company donates the use of several of its smaller machines for the training in the interests of promoting ATV safety in First Nations in Northern Ontario.

“The company is outstanding with us,” Captain McNeil said. “Sometimes they give us a bill for the bigger damages done to their machines but they forgive a lot of the other stuff. We couldn’t do this without them.”
(Sergeant Peter Moon is the public affairs ranger for the 3rd Canadian Ranger Patrol Group at Canadian Forces Base Borden.)