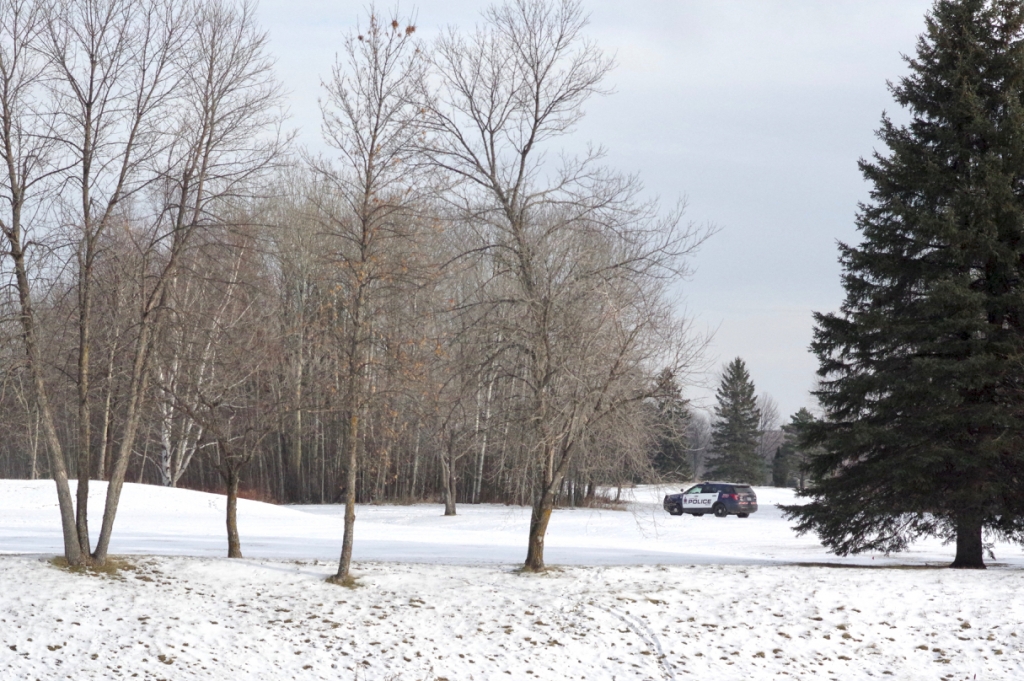 Webequie youth Braiden Jacob’s body was found on Dec. 9 in Chapples Park in Thunder Bay after a passerby reported seeing a body. Photo by Rick Garrick.

The community of Webequie is calling for support after the body of 17-year-old Braiden Jacob, from Webequie, was found in Thunder Bay on Dec. 9.

“He has been found and that is not a good thing to hear, especially with our young people,” says Webequie Head Councillor Harry Wabasse. “A lot of young people here were very close, especially in a community this small too.”
Wabasse says the community is “very fragile at this moment, especially the young people.”

“What we are shouting to other communities is we would like to get some support,” Wabasse says. “We have a lot of young people starting to act up and we need help. A lot of these young people need counselling, and on-going sessions. Even with the family, especially when the body comes in, then it is going to escalate. It always does, but with the nature of this issue, they think it is going to be more.”

Jacob was found just after 11:30 a.m. in the Chapples Park area after a passerby saw a body. Jacob was last seen on Dec. 6 near the Limbrick Street area.

“Since he was reported missing on Thursday we had held out hope that Braiden would be found safe and sound,” says Grand Chief Alvin Fiddler. “We prayed for his return, and are saddened with the news we received last night that has confirmed our worst fears. We would like to express our condolences to Braiden’s family, friends and the entire Webequie community, and we will do everything possible to support them during this difficult time. We would also like to thank the Thunder Bay Police Service and the volunteers who participated in the search for Braiden. Nothing can lessen this tragic loss, but we hope that a thorough investigation will reveal the circumstances around his disappearance and help prevent similar tragedies.”

Regional Chief RoseAnne Archibald also extended her deepest condolences to the family of Braiden Jacob and the community of Webequie.

“I am saddened to see another body of our youth found in Thunder Bay,” Archibald says. “I am sending my deepest condolences to the family and friends of Braiden Jacob during this time and to Chief (Cornelius) Wabasse, his Council and the community of Webequie. There is no reason for this individual to have lost his life after travelling to Thunder Bay to attend counselling services for trauma and grief. Clearly, our funding partners must continue the ongoing work of increasing essential mental health services directly in First Nation communities. While we do not know the full details of Braiden’s disappearance, we do know the loss of life and the lost potential of young people, like Braiden, is an ongoing tragedy must be addressed with real on the ground solutions in Thunder Bay. I ask our allies to work with us and stand with us as we take further steps to keep our youth safe. Like all families, we want our children to be safe and treated with dignity by everyone.”

Thunder Bay Mayor Bill Mauro also offered condolences to the family of Braiden Jacob and the community of Webequie.

“On behalf of City Council and the citizens of Thunder Bay, we offer our deepest sympathies and heartfelt condolences to Braiden’s family, friends and the community of Webequie First Nation,” Mauro says. “Thunder Bay grieves with you. We would like to thank everyone who took part in the search for Braiden including the volunteers and members of the Thunder Bay Police Service. We are saddened beyond words and stand with you at this most difficult time.”

Thunder Bay Police Service stated in a Dec. 9 press release that they are investigating a sudden death after finding Jacob’s body. The investigation is in its very early stages and no other details could be confirmed in the press release.
Police say they are holding the scene and are requesting the public to stay away from the area while the investigation continues.