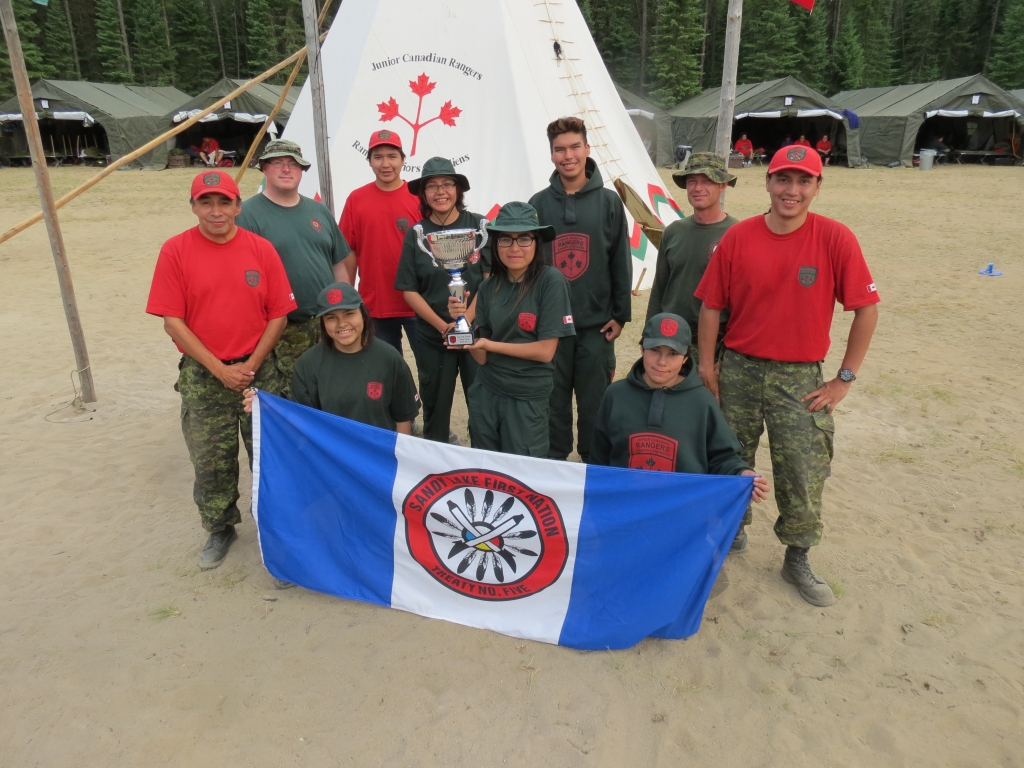 The Junior Canadian Ranger patrol in Sandy Lake First Nation has been named the year’s best patrol in Ontario.

The cup honouring their achievement was presented to a small group of representative Junior Rangers from Sandy Lake while they are attending Camp Loon, an annual advanced training camp for Junior Rangers held in the bush north of Geraldton. They will take the cup home with them at the end of the camp.

“They’re the best? That’s great,” said Sandy Lake Chief Bart Meekis. “That’s really good news. I’m so pleased to hear that. When they bring the cup back with them from the camp maybe we should give all the Junior Rangers a parade to celebrate.”

The winning patrol has more than 60 active citizens in Sandy Lake, an isolated Ojibwe community with a population of about 1,800, located 600 kilometres north of Thunder Bay. The Junior Rangers is a national Canadian Army program for boys and girls aged 12 to 18 in remote and isolated communities across the North

“They are a very strong Junior Ranger patrol,” said Captain John McNeil, the Canadian Army officer who commands more than 1,000 Junior Rangers in 23 First Nations across the Far North of Ontario. “Sandy Lake is really following the spirit of what the Junior Canadian Ranger program is about, which involves the community taking ownership of the program. The army are only there to facilitate and guide them if they require it.”

The Sandy Lake patrol is an outstanding success, he said, because it has a good Canadian Army instructor making regular training visits and a good Ranger master corporal from the local Canadian Ranger patrol. The master corporal runs the Junior Ranger patrol with the backing of a lot of supportive Canadian Rangers. In addition, the local chief and council provide support, giving the Junior Rangers free space in the high school for indoor meetings, and by setting aside a parcel of land about 10 kilometres outside the community for a shooting range and outdoor training site.

“We also have the support of the parents,” said Master Corporal Floyd Fiddler, the Ranger who runs the Junior Ranger patrol. “The parents and the community are happy that their kids are involved with us. We keep everyone informed about what we are doing and they trust us with their kids.

“The program is all about the kids and the training we give them. The kids listen to what we say and they do it. As a result they enjoy what they do very much. They’re very active and that makes other kids want to get involved too.”
Junior Rangers in Sandy Lake keep a busy training schedule, meeting almost every week and often going out on the land for overnight trips. Their training stresses safety on the land and water and in their personal lifestyles.

“Being a Junior Ranger has done a lot of good stuff for me,” said Evan Mawakeesick, a 13-year-old patrol member. “We do something every week. We hunt and we fish together. We do things like navigation. I look forward to it. It’s fun and we learn a lot of good stuff.”

Sergeant Kevin Meikle, the army instructor for the patrol, said he enjoys his periodic visits to Sandy Lake. “The Junior Rangers train throughout the year, without regard for the weather, whether I’m there or not, and the number of Canadian Rangers who turn out to help with that training is far superior to patrols in other communities. They are positive role models for the kids.

“It’s always fun going on a camping trip with the kids, going fishing or canoeing with them. I look forward to my visits. It is a very good patrol.”