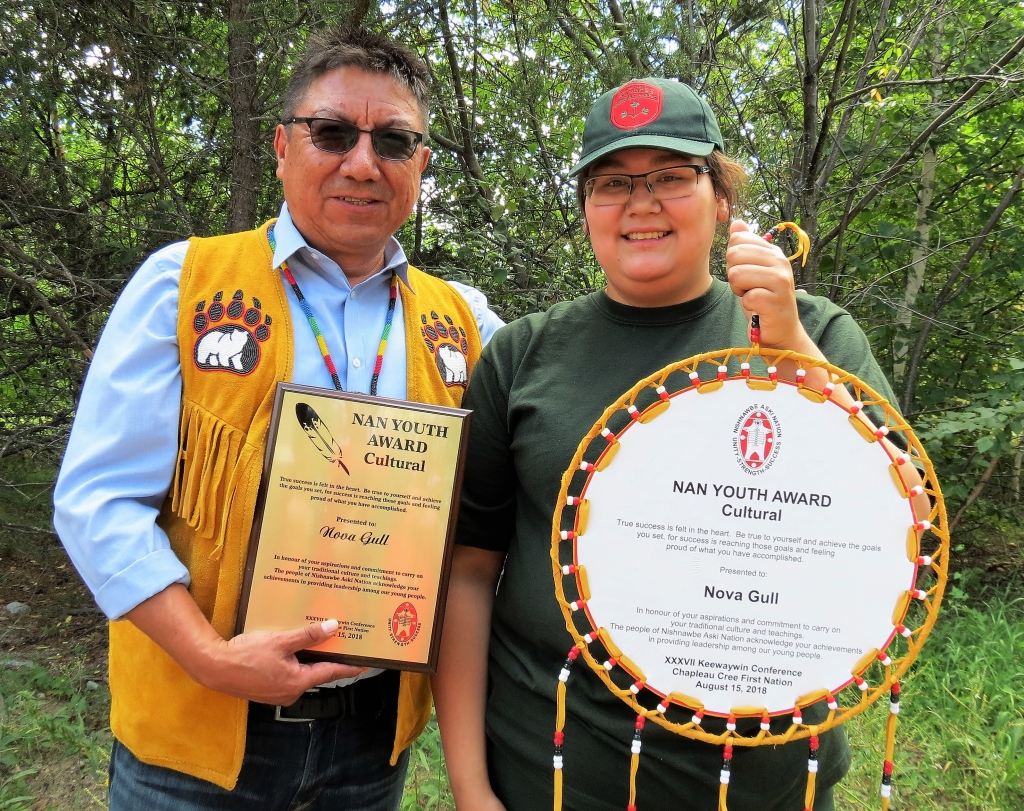 A Junior Canadian Ranger from the small Cree community of Peawanuck near the Hudson Bay coast has won a prestigious youth award for her leadership and commitment to preserving her Indigenous culture.

“I think what she has done is great,” said Grand Chief Alvin Fiddler of Nishnawbe Aski Nation {NAN} as he presented the award to 17-year-old Nova Gull. “I think it’s important that we encourage our youth in preserving their culture. She has done that and I can see that she has benefited from the Junior Canadian Ranger program.”

The Junior Canadian Rangers are a Canadian Army program for boys and girls aged 12 to 18 in remote and isolated communities across the Canadian North. Nova has been a Junior Ranger since she was 12. NAN represents 49 First Nations across the Far North of Ontario.

Nova received a province-wide James Bartleman Indigenous Youth Writing Award last December for a poem she wrote. “Nova’s poem ‘Where’s Our Voice’ highlights the lack of attention shown towards Indigenous issues,” said the citation for her winning entry, “and aims to bring awareness to what has happened to Indigenous people in Canada.”

The citation for her Youth Award from NAN said she received it “in honour of your aspirations and commitment to carry on your traditional culture and teachings. The people of (NAN) acknowledge your achievements in providing leadership among our young people.”

In February she won praise for volunteering during a Canadian Ranger training exercise she was observing as a Junior Ranger in Polar Bear Provincial Park. An emergency forced a Canadian Ranger to leave the exercise by plane, leaving her snowmobile and heavily laden sled behind. TheRanger was able to fly out because Nova gave up her seat on the flight for her.

Nova volunteered to drive the abandoned snowmobile and sled back to Peawanuck. The arduous 300-kilometre trip took two days and involved travelling by day and night in bad weather.

She made headlines again in February when she spoke passionately at a demonstration in Timmins that was protesting the shooting death of an Indigenous man. “We are taught to show respect,” she said. “We are taught those teachings. It is sometimes hard to try to live those teachings when every day the system in this country fails us.”

Nova said the Junior Ranger program has helped her to develop her leadership skills and the confidence to assist others. She is attending high school in Timmins and wants to continue with her education so that she can pursue a career that will allow her to help others. “I’m interested in maybe becoming a paramedic or a counselor of some kind,” she said.

Her father, Matthew Gull, is the Canadian Ranger sergeant commanding the Ranger patrol in Peawanuck.

“I am extremely proud of her,” said Catherine Gull, her mother, “and with what she has accomplished, especially with the help of the Junior Ranger program. The program has helped her to take on leadership roles she couldn’t have done otherwise.

“She grew up in the bush and she loves being on the land. She was sitting with me in a (goose hunting) blind when was two years old. She went hunting with us all the time. She is proud of her culture.”