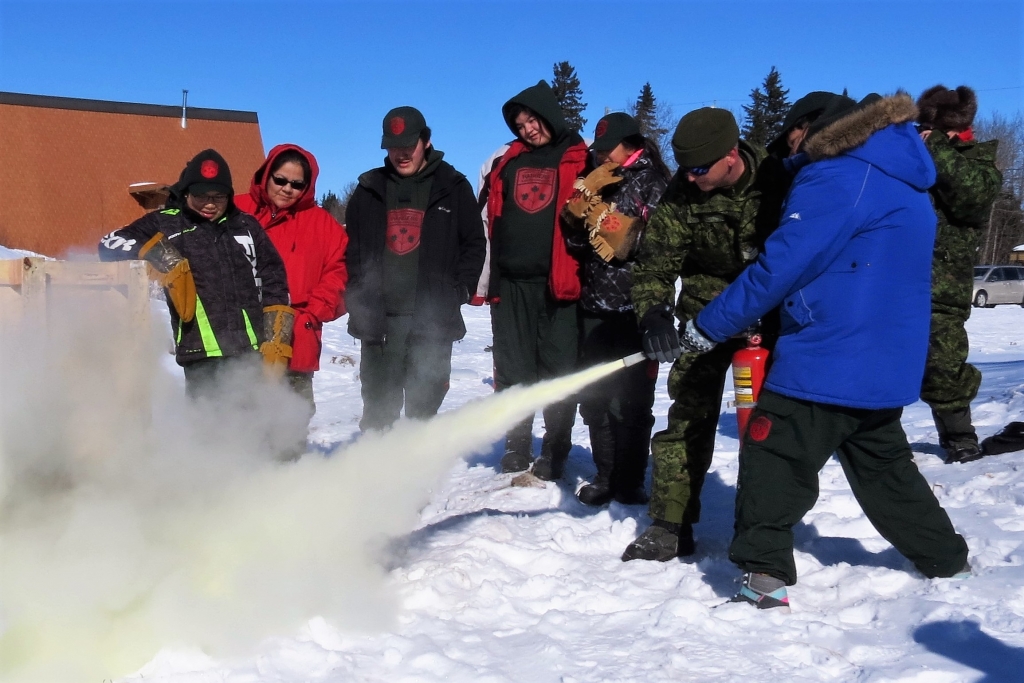 Sergeant Scott Hooper, a Canadian Army instructor, helps a Junior Canadian Ranger to use a fire extinguisher to put out a fire. Photo by Sergeant Peter Moon, Canadian Rangers.

A group of Junior Canadian Rangers from Attawapiskat learned how to start fires and put them out with a fire extinguisher during a weekend visit to Moose Factory on the James Bay coast.

“It was awesome,” said Junior Ranger Dalton Shisheesh. “I enjoyed myself. It was fun but I also learned from it. We all did.”

The Junior Rangers were taught how to use a magnesium block and a metal striker to produce sparks and get a fire started. “A striker, whether it gets wet or not, will always work to get a fire started,” said Sergeant Scott Hooper, a Canadian Army instructor. “So we keep it in our survival gear in case somebody fall outs of a boat or becomes wet or lost. It never runs out of fluid and it is always there.

“The kids loved using an extinguisher to put out their fires. Absolutely. Teach kids how to light a fire and put it out with an extinguisher? They loved it.”

The Junior Canadian Rangers is a program operated by the Canadian Army for boys and girls aged 12 to 18 in remote and isolated communities across the Canadian North. There are almost 1,000 Junior Rangers in 20 First Nation communities in the Far North of Ontario. The program emphasizes safety on the land and water and in personal lifestyles.

During the visit to Moose Factory the Junior Rangers received lessons in ice water safety. “We taught them what to do if they found themselves falling through ice,” Sergeant Hooper said.

“We also taught them what to do if they see someone fall through. They now know what to say to a victim, telling them to stay calm, control their breathing. Tell them: ‘Look at me. I’m going to get you help.’ Reassure the person. Tell them what to do. To kick their legs.

“We showed them how to build small snow mounds so the victim can use them to pull themselves out of the water. But we also told them not to approach too close to the hole so that they become a second victim.”

The Junior Rangers also spent time in a temporary command post set up by local Canadian Rangers participating in a major search and rescue exercise. “Yeah, it was interesting,” said Junior Ranger Shisheesh. “I’m thinking about becoming a Canadian Ranger one day. I think I’d like to do that.”