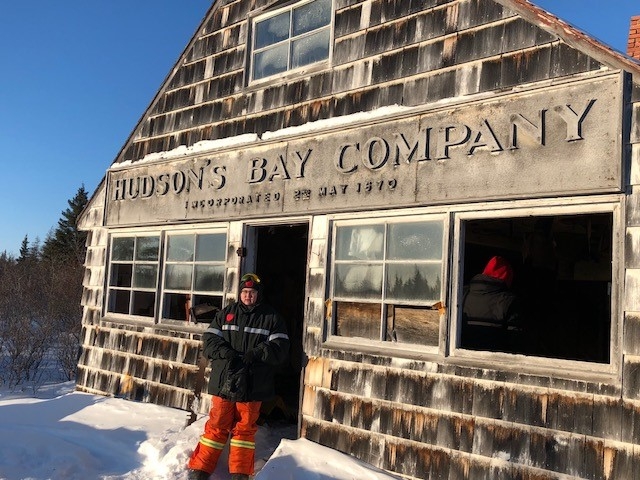 When 17-year-old Junior Canadian Ranger Nova Gull flew to a Canadian Ranger training camp in remote Polar Bear Provincial Park she knew she was embarking on an adventure. But she had no idea how adventurous it would turn out to be.

Nova lives in Peawanuck, an isolated Cree community near the Hudson Bay coast. She was one of six Junior Rangers who spent three days at a Canadian Ranger training camp in the park at Lake River, the site of the long abandoned Cree settlement of Lakitusaki. The former Hudson’s Bay Company trading post, church, and several residential buildings still stand on the site.

The six Junior Rangers were from Attawapiskat, Fort Albany, and Peawanuck. They went to Lake River to watch the Rangers taking part in Exercise Mobile Ranger, which involved a total of 98 Canadian Rangers from 23 First Nations and 28 other military personnel conducting training at four sites across Northern Ontario. The Lake River site was plagued by bad weather, with blizzards and wind chills that dropped below -50C.

“There was one night in camp when it got really cold,” said Nova. “But I enjoyed the visit.”

The Junior Rangers worked with the Rangers and made smoke signal fires, cooked bannock, learned how to skin and butcher a caribou the Rangers brought with them into the park, made emergency shelters, and helped erect a radio antenna mast.

Nova was all set to leave the exercise and fly home on a small plane with the other Junior Rangers when a crisis hit.

Ranger Madeline Hunter of Peawanuck received word that she had to get from Lake River to Timmins immediately for a family emergency. Her only way to the nearest airport was a two-day snowmobile trip, which would have meant she would not arrive in Timmins in time.

Nova immediately gave Ranger Hunter her seat on the departing plane and offered to drive her snowmobile with its laden sled back to Peawanuck for her.

Nova drove the snowmobile in the company of the Peawanuck Rangers who were travelling from Lake River back to their community. The arduous 300-kilometer trip took two days and involved travelling both during the day and at night. “There was one night when there was a blizzard, my headlight was out, and I was pulling a heavy sled,” Nova said. “I’d only done day trips by snowmobile until then. I was really tired when I got home but I’m glad I was able to do it.”

“A Junior Ranger kept up with a group of senior Rangers all the way back to Peawanuck,” said her father, Sergeant Matthew Gull, commander of the Peawnuck Ranger patrol. “We’re proud of her here in the community for stepping up and helping out in she way she did.”