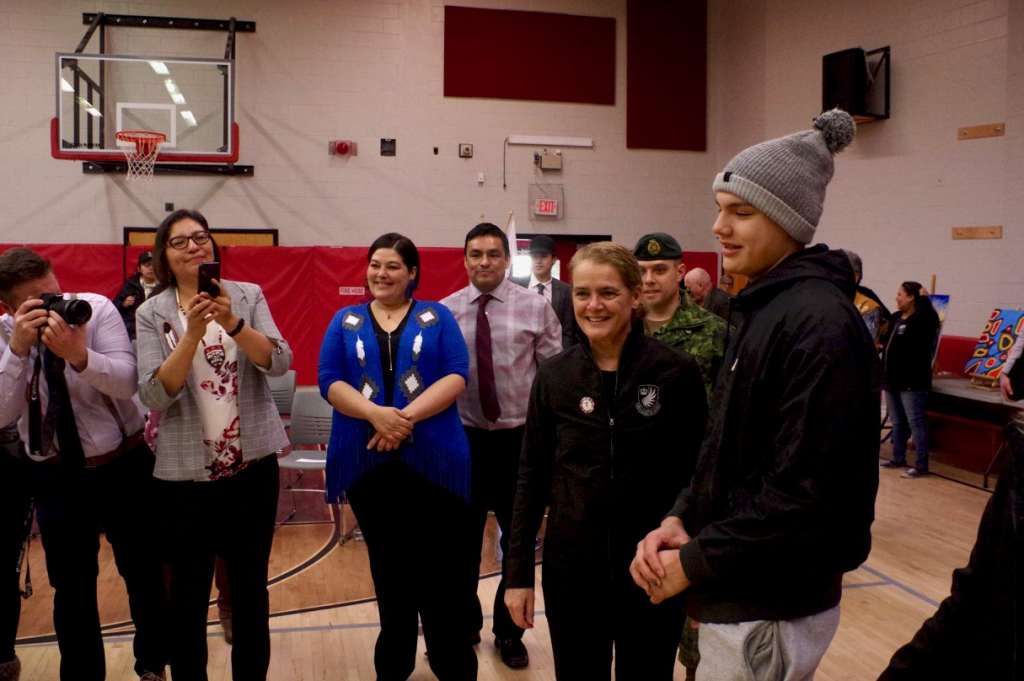 “Before I was a governor general I was an astronaut and I served as a Canadian astronaut for 21 years and did two missions in space,” Payette says. “The reason I ended up becoming an astronaut was because I saw other astronauts on TV when I was little. So here I am growing up in Montreal and I’m thinking: ‘Hey this is a really cool job, I want to do this. I want to put on the space suit and I want to get on this rocket and I want to fly into space.’”

William Bottle, a Grade 10 DFC student from Mishkeegogamang, appreciated the opportunity to meet Payette during her visit.

“It feels unreal having someone so important here at Dennis Franklin Cromarty — it’s a huge opportunity for us as teachers and students and First Nations,” Bottle says. “It’s something I actually look forward to is becoming an astronaut. It seems pretty cool to be up there in space, weightless, especially floating around like you are in water.”

DFC principal Sharon Angeconeb says the staff and students were honoured to host Payette during her visit.

“It’s an amazing opportunity to have someone like her with her achievements visiting the school and to tell her story,” Angeconeb says. “There were quite a few students that were interested and just inspired by her story. We’re glad to have people like her visit our school and be able to spend time with our students — it shows them what they could achieve too as well.”

Elder John Gagnon, one of the Elders at DFC, says Payette was “awesome.”

“She loves DFC — she said it was the coolest school in Thunder Bay, so I believe her,” Gagnon says, adding he was certain that some students would get hooked on a career as an astronaut after seeing her Dare to Dream presentation. “Sure you’re going to have somebody that is going to dream, and hopefully maybe we will see a Native person up in space because of her visit.”

“The questions were answered pretty thoroughly, and I think it gives a lot of information for students for looking at options for their careers as they progress on into their education, particularly into sciences,” Thompson says. “(With) that Dare to Dream, do what you want, maybe we might have an astronaut in our midst.”

Dobi-Dawn Frenette, director of education for Northern Nishnawbe Education Council, says Payette’s message in her Dare to Dream presentation was “really important” for the students whether they are looking at becoming an astronaut or a doctor or a lawyer or a reporter or to work in the trades.

“It was a great honour having Her Excellency with us here today, not only in her role as governor general but in her former role as an astronaut,” Frenette says. “She brought both grace and humour to her presentation for our students and staff and it was a very engaging opportunity for Dennis Franklin Cromarty.”

Payette also encouraged students who are interested in a career in space to sign up for the Junior Astronauts program that is posted on the Canadian Space Agency website at: www.asc-csa.gc.ca/eng/default.asp.