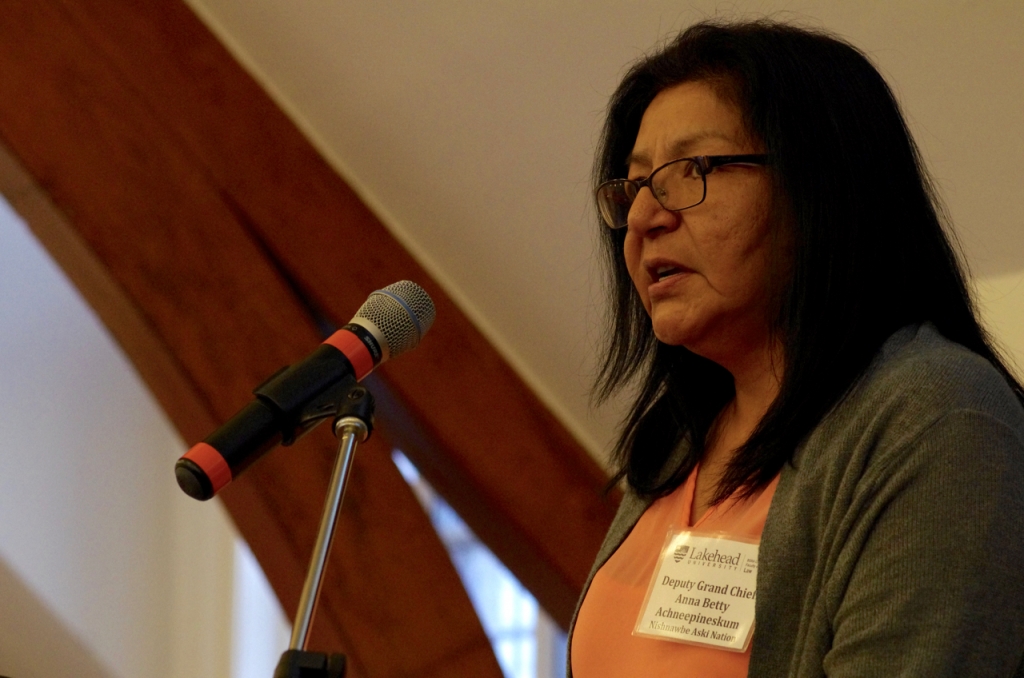 Nishnawbe Aski Nation is calling for increased funding for the Nishnawbe-Aski Police Service after the Feathers of Hope Justice and Juries report was released on March 7.

“We all know that Nishnawbe-Aski Police Service and Treaty Three Police are all underfunded,” says Deputy Grand Chief Anna Betty Achneepineskum. “And that is the main (reason) why they are unable to provide adequate services. They don’t have the budget to provide services in the way they should be.”

The second recommendation called for mandatory police college level training specific to the history of Aboriginal people and the legacy issues that increase their risk of coming into contact with the law.

The third recommendation called for police officers to focus on building positive working relationships with all community members as part of their duties.

“Much of the report is things that were quite obvious to us,” Achneepineskum says. “We hope the report will make an impression on the policing and the court system because the Provincial Advocate’s office does have a high profile.”

The fourth recommendation called for government to work with Aboriginal leadership, band councils and educators to develop legal rights education courses for Aboriginal youth at the primary, intermediate and senior high school levels.

“We’re trying to find ways to introduce this to our chiefs,” Achneepineskum says. “We have an Aboriginal Child and Youth Strategy Chiefs Committee, who are meeting in (May), so this is part of what we are going to be talking about.”

The Justice and Juries report was released by the Office of the Provincial Advocate for Children and Youth at Queen’s Park in Toronto and Parliament Hill in Ottawa.

“From an early age, many Aboriginal youth view the justice system as a system that punishes and shames individuals, apprehends a disproportionately high number of children into care, and fails to protect those in need, especially Aboriginal women,” says Irwin Elman, Ontario’s provincial advocate for Children and Youth. “Unless fundamental changes are made to create a more inclusive and fair justice system we will continue to alienate future generations of Aboriginal people.”

The report captured the voices of more than 150 Aboriginal youth from across Ontario who participated in the Feathers of Hope: Justice and Juries youth forum, held Nov. 17-20, 2014 in Thunder Bay. The report is available online at: http://provincialadvocate.on.ca/documents/en/JJ_En.pdf.

“As a champion, I've seen young people transform into leaders who are speaking openly and courageously on the changes needed for the justice system and how to build stronger ties with Aboriginal people,” says Celina Reitberger, executive director of Nishnawbe-Aski Legal Services Corporation and Feathers of Hope champion. “I commend them on their hard work and for staying true to reflecting the voices of youth who attended the Feathers of Hope forum.”
The youth forum was held at the request of former Supreme Court of Canada Justice Frank Iacobucci, who authored a report on the under-representation of First Nations people on jury panels.

“The Aboriginal youth who participated in the forum and development of the report personified the seven Grandfather Teachings of wisdom, love, respect, bravery, honesty, humility and truth,” says Mandy Wesley, an Aboriginal lawyer and Feathers of Hope champion. “It was upon this foundation that they collectively developed an action plan that fosters reconciliation and serves to advance access to justice for Aboriginal peoples.”