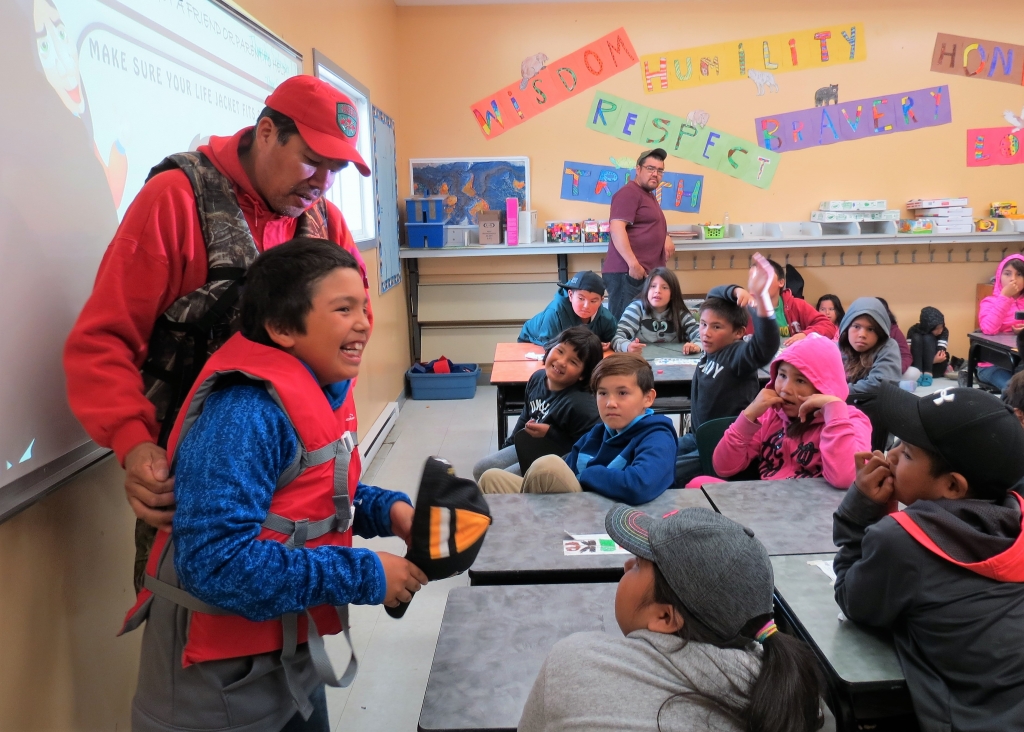 Canadian Rangers are distributing free life jackets in six First Nation communities in Northern Ontario to launch a national initiative to reduce the high rate of drownings in the Canadian North.

The first life jackets were distributed in September in Kashechewan, a Cree community on the James Bay coast with a population of about 1,800, where the idea for the program began with a local Canadian Ranger.
Life jackets will also soon be distributed in Attawapiskat, Fort Albany, Fort Hope, Peawanuck, and Webequie. The educational component of the program will expand next year to Northern Quebec and then across the Canadian North the following year.

The federally funded project, called Operation Life Preserver, is organized by the Canadian Safe Boating Council. The educational component will be delivered nationwide by Rangers in more than 200 remote and isolated communities where there are local Rangers. The Rangers are part-time reservists with the Canadian Army.

The idea for the program began two years ago when a friend of Ranger Redfern Wesley of the Kashechewan Ranger patrol drowned. He was one of several friends he has lost in drownings over the years. In all of them the victims were not wearing a life jacket. The most recent friend to die was checking his night fishing lines when he somehow finished up in the Albany River. It took two days for the Rangers to find his body.

“He always wore a jacket and for some reason he was not wearing one the night he died; I have no idea why he wasn’t,” said Ranger Wesley. “Most people here can’t swim and people are frightened they might drown. It’s really expensive up here to buy a life jacket and people can’t afford them even though they spend a lot of time on the water for hunting and fishing. Travelling on water is part of our lives.”

Life jackets, when they are available in isolated Northern communities, can cost up to $100 each, making them beyond the financial resources of most families, many of them with, typically, five or six children.
After the death of his friend, Ranger Redfern discussed the need for life jackets with Warrant Officer Carl Wolfe, a Canadian Army instructor, who arranged for him to speak last year in Yellowknife at the annual Canadian Safe Boating Council conference.

“He was supposed to speak for 20 minutes,” said Warrant Officer Wolfe. “He held the audience for close to an hour. Nobody attemped to interrupt him. Nobody left the room. He held the audience. He spoke to the need and plight of his people. He spoke honestly and grown men had tears running down their faces as he spoke. It was one of those defining moments.”

The Canadian Safe Boating Council decided to launch Operation Life Preserver and went to the Canadian Army, which has 5.000 Canadian Rangers across the Canadian North, for help in distributing the jackets. The Army gave its support for the program.

During their distribution in Kashechewan Ranger Redfern gave 30-minute educational presentations to the grade one to 12 students in both the junior school and high school. He spoke to them in Cree and English and used a PowerPoint presentation that included dramatic video. He started each presentation by asking the students if they could swim or if they owned a life jacket. Often only a couple of hands went up.

“I was really blown away at how responsive the kids were in each of his presentations,” said Stephanie Rankine, a project manager for the Canadian Safe Boating Council. “The kids realize the Rangers are experts. They know them and they respect them. They know they can trust them.”

The educational program delivered by the Rangers will tell students that in 85 per cent of all drownings the victim was not wearing a life jacket, about the importance of having a whistle to alert potential rescuers, and how to preserve their body heat in cold water. They will be shown simple ways to use looped rope permanently attached to a boat to help them get back into a boat.

The program will also stress the importance of telling a trusted person when they are going out in a boat, about where and why they are going, when they expect to return, and telling them when get back.