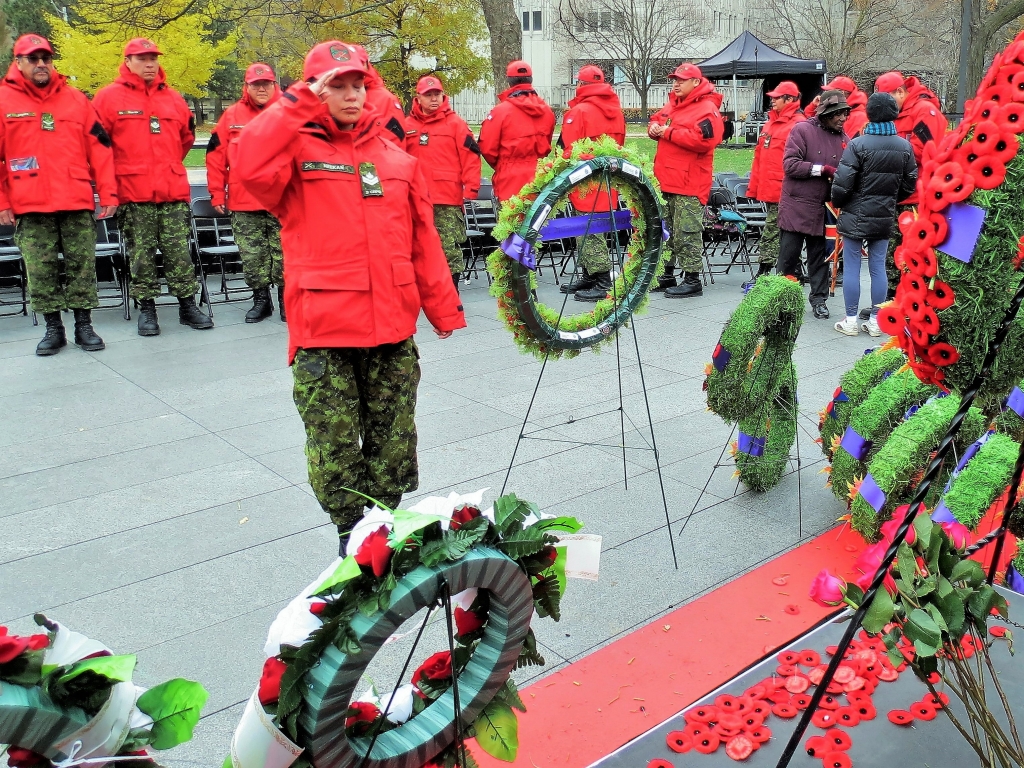 Corporal Shyan Neekan of Mishkeegogamang salutes after laying her poppy down at the Ontario Veterans Memorial in Toronto. Photo by: Sergeant Peter Moon, Canadian Rangers.

A contingent of Canadian Rangers from 12 First Nations from Northern Ontario participated in a prominent Remembrance Day ceremony in Toronto on November 11.

Wearing their distinctive red jackets and combat pants, they attracted a lot of curious attention from many in the large crowd at the Ontario Veterans Memorial in front of the main entrance to Queen’s Park. The memorial, a 30-metre-long granite wall, has scenes on it of the Canadian military’s role in peace and war since 1867.

When the Rangers explained their role as part-time army reservists in the province’s Far North and their involvement in search and rescue missions, evacuations for floods and forest fires, and other emergencies many people shook their hands and thanked them for their military service to their communities and Canada.

After the Remembrance ceremony the Rangers were invited to a reception in Ontario Lieutenant-Governor Elizabeth Dowdeswell’s vice regal suit in the Legislature, where they met both her and Ontario Premier Doug Ford.

“I found the ceremony very interesting,” said Corporal Joe Lazarus of Kashechewan. “I never expected to meet the Lieutenant-Governor and the Premier.”

“It was an experience to see all the army, navy, air force, cadets, and all the people at the wall,” said Sergeant Charlie Linklater of Sandy Lake. “This has been a very interesting experience.”

It was the first time Rangers have been to a Remembrance Day ceremony in Toronto. The ceremony this year observed the centennial anniversary of the end of the First World War and was the culmination of a 12-day training visit to the south. In addition to the ceremony at Queen’s Park they attended a ceremony on November 5 in a Burlington cemetery where school children places poppies and Canadian flags on the graves of veterans. They also visited a school in Burlington where they were peppered with questions about their lives in the Far North.

On November 9 they took part in a Remembrance Day ceremony at Rama First Nation where they drew media attention. “They gave us a great welcome,” Corporal Lazarus said, “and there was a lot of interest in who we are and what we do.”

On November 8, Aboriginal Veterans Day, the Rangers were the centre of attention at an big event at Canadian Forces Base Borden that celebrated the 25th anniversary of the founding of what is now the 3rd Canadian Ranger Patrol Group, which commands the 570 Rangers In 25 Northern Ontario First Nations.

“We thought we were coming south for the 25th anniversary,” Corporal Lazarus said, “and we never thought we were going to be doing all these other things. It has been an experience.”