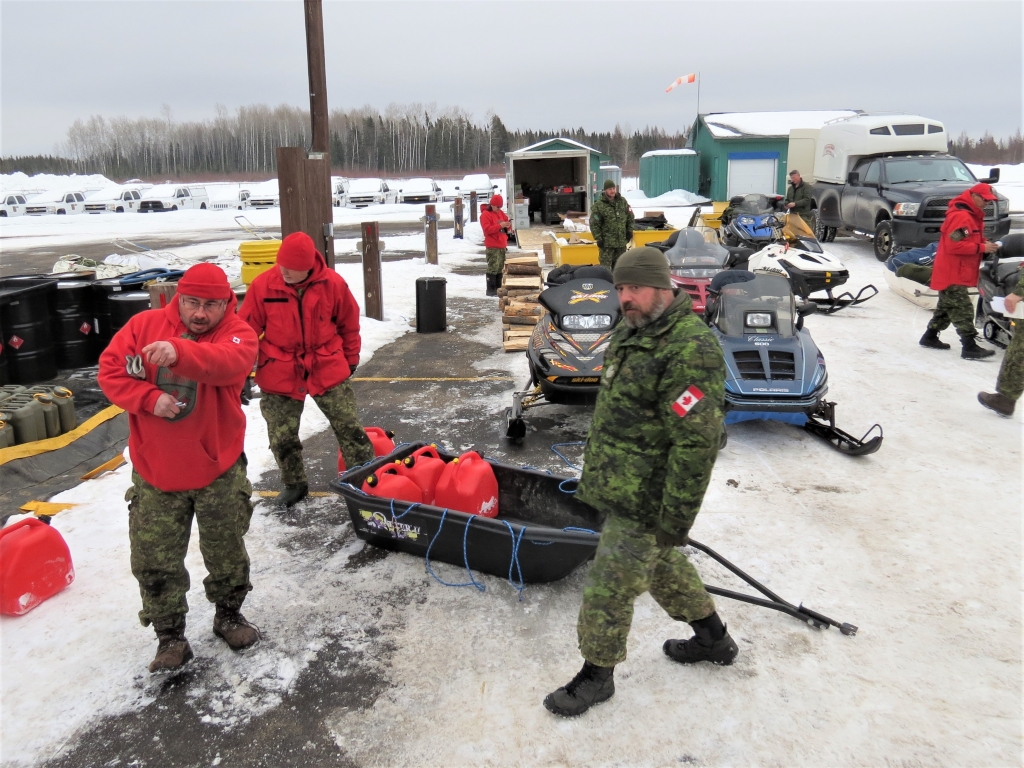 Rangers fuel snowmobiles and load supplies for the departure of troops for on-the-land training.

A group of new Canadian Rangers are key players in Exercise Norex20, a week-long army exercise providing about 200 reserve soldiers from southern Ontario with specialized training in the Northern Ontario bush.

The Rangers , who are part-time reservists, are from four related First Nations – Aroland, Ginoogaming, Long Lake # 58, and Marten Falls –and from the nearby small towns of Geraldton and Long Lac. They are acting as guides and also as teachers as they pass on their traditional on-the-land skills to the soldiers.

“I wouldn’t want to do this exercise without the Rangers,” said Lieutenant-Colonel David Meehan, the exercise director. “They know the terrain, the location, and they bring their knowledge of the land. I am definitely happy to have them on the exercise.”

The Rangers are known for their red uniform hoodies and red caps.

“As someone said, in all sincerity, if you get into trouble look for red,“ Colonel Meehan said. “The Rangers are the people who can help you out in a difficult spot up here.”

The Rangers on the exercise are from two patrols and two detachments, sub-components of a patrol, that only opened in December and not all the Rangers on Norex20 have completed basic training. Three highly experienced Rangers – one from Constance Lake and two from Lac Seul – have been added to the exercise, to provide assistance to the new Rangers and to Norex20.

Ranger Gaetan Goulet, a member of the Long Lake patrol, has done 10 days of basic Ranger training at the 4th Canadian Division Training Centre at Meaford, near Owen Sound, and is guiding the troops snowmobiling from Geraldton to Beardmore.

“This is my first big experience as a Ranger,” he said, “and it’s awesome so far. Spending time in the bush with the army is great. I don’t feel intimidated. I’m in my own back yard. It’s going to be neat because most of these army guys are young boys and this is going to be an experience for them.

“I’m hoping to catch a few fish, show them how to clean them, and have a fish fry for them.”

Not all the soldiers are inexperienced in the North. Some belong to the Arctic Response Company Group, which trains to respond to emergencies in the Canadian North, including the Arctic.

A group of Rangers who were unable to participate fully in the exercise completed a number of tasks to assist it, including cutting firewood and contributing country food to provide the soldiers with a memorable Northern Ontario eating experience.

“I’ve been looking forward to this,” said Trooper William Middleton of the 1st Hussars, a reserve regiment based in London. Norex20 is his first experience in the North.

“And this will be my first experience with the Rangers,” he said. “We’ve been told they’re the guys to turn to if anything goes wrong. They know everything about where we’re going. We’ve been told to listen to what they say. They know this land up here better than any of us.”