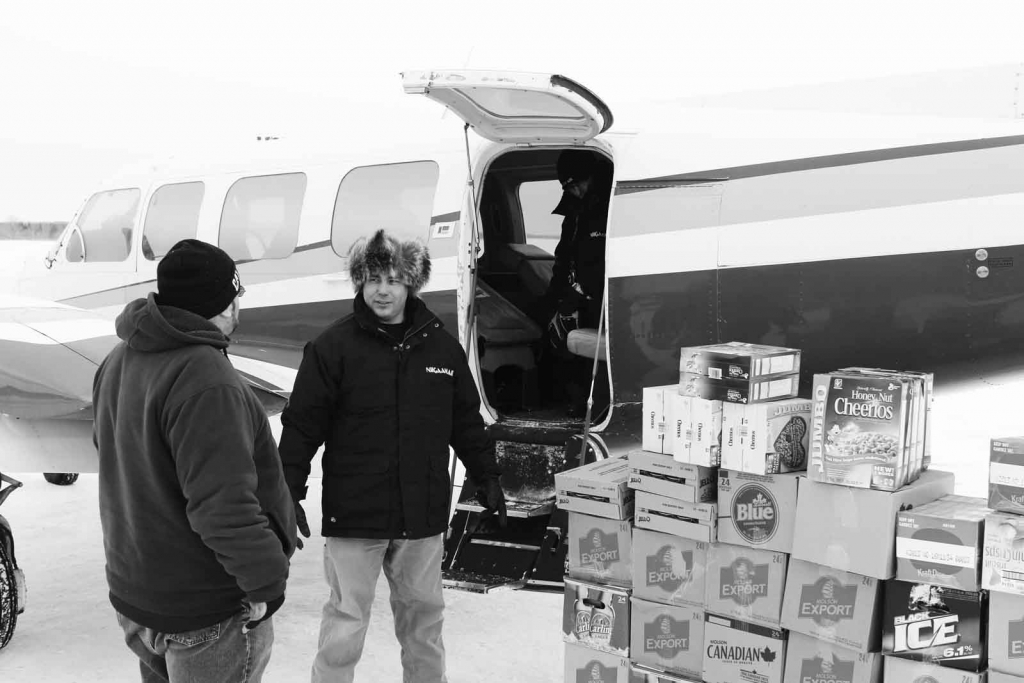 A First Nation owned airline based in Thunder Bay is trying to do its part in shipping food to northern communities.
Niigaani Air recently flew shipments of food donations to Webequie and Eabametoong First Nations and hopes to do more runs.
Arthur Esquega, president and owner of the charter plane service, said the idea came about after speaking with his mother, who put him in touch with a reverend in Webequie.
Esquega said Niigaani Air had wanted to make use of its “dead legs” – the part of a chartered flight that is empty when either going to or returning from a community.
“We’re promoting a food drive with our empty legs for people up in north who are in need of food,” the Gull Bay First Nation member said. “There’s opportunity there and we want to take advantage of that.”
Esquega contacted the Regional Food Distribution Association (RFDA) in Thunder Bay, which runs a food bank and serves the northwestern Ontario region.
RFDA executive director Volker Kromm said the organization has slowly been developing programs to serve various communities, including the remote ones in the north.
“We have so many communities that aren’t serviced, and we’d like to be able to help. We’re making a strategy,” Kromm said. “It’s difficult because of planes, and you have the ice roads.”
Kromm said the call from Esquega was good timing, as he had also heard about the need for food donations in Webequie due to a community emergency.
The two coordinated the shipment, which is all volunteer work and there is no money transactions involved.
With the two shipments complete, Kromm said the RFDA has a formed “great little partnership” with Niigaani Air and hope to send more food donations.
Speaking to Wawatay News on Jan. 31, Kromm had hoped to send a shipment to Round Lake.
“We are looking at that. It’s just a matter of logistics,” he said.
Kromm said the RFDA wants to enhance its service in the north.
“If this keeps up, we’re going to have to partner with communities for place to store – a warehouse – where we can store (the food),” he said.
Meanwhile, Niigaani Air wants to do what it can.
“I think it’s something good, if we can keep this going, we will,” he said.
Esquega said he realizes food is expensive in northern communities and not many people have jobs to support a family.
“I just feel like, being a kid, you shouldn’t be ashamed of having no food at home,” he said. “So it’s basically for the kids.”
Niigaani Air is 100 per cent owned and operated by Gull Bay First Nation members. It began service in 2000 before closing down for a number of years.
Esquega restarted the company two years ago to try to take advantage of opportunities, including within the Ring of Fire.
“We’re trying to operate a good service and do what we can do on the side,” Esquega said.