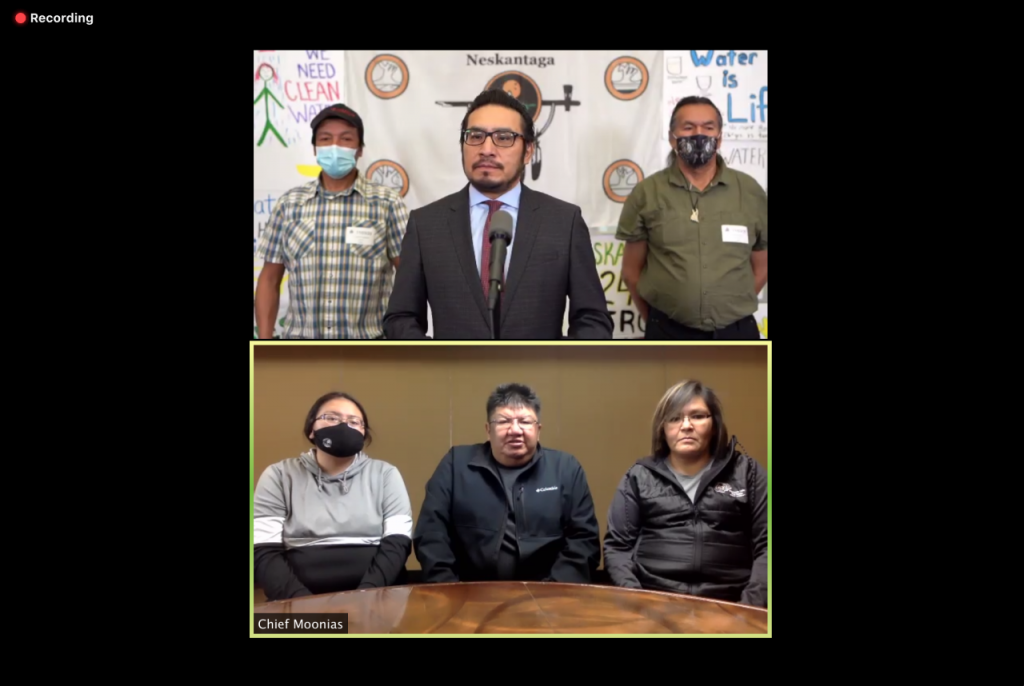 Kiiwetinoong MPP Sol Mamakwa speaks about the longstanding lack of clean drinking water in Neskantaga during a Nov. 3 press conference about a sit-in at the Ontario Legislature by Neskantaga citizens Lawrence Sakanee and Alex Moonias over the water crisis in their community. (Screenshot)

Neskantaga citizens Lawrence Sakanee and Alex Moonias began their sit-in at the Ontario Legislature with a virtual press conference with Kiiwetinoong MPP Sol Mamakwa on Nov. 3 about the water crisis in their community.
Neskantaga Chief Chris Moonias and citizens Renita Moonias and Marilyn Waswa joined the virtual press conference from Thunder Bay to speak about how the long-term lack of clean drinking water has impacted their lives.

“We are here today to address the water crisis in Neskantaga,” Mamakwa says. “Neskantaga has been in a boil water advisory for over a quarter of a century, over 25 years, and as you know this week is Treaties Recognition Week and we acknowledge the treaties that have been signed by our forefathers and what Ontario and Canada have signed.”

Mamakwa says he sat down on Nov. 2 during the national anthem in the Legislature as a way to honour the Elders and the forefathers who signed the treaties.

“But also (to emphasize) how Ontario and how Canada continues to treat our people differently, in this case water,” Mamakwa says. “Water is such a basic necessity and Neskantaga has had no water for over a quarter of a century. We’re here to have equitable access to clean drinking water for these families, for this community.”

Moonias says the citizens in his community are getting tired and frustrated over the lack of clean drinking water.

“We are denied the basic human right of access to clean water,” Moonias says. “We fully support our citizens who have travelled to Queen’s Park to hold the provincial government responsible for their part in what our community is facing. Fix our water.”

Renita, a mother of two young children, says it is painful for her and her children to keep going through the longstanding lack of clean drinking water.

“I don’t want them to grow up without clean drinking water,” Renita says. “I don’t want them to have to bathe in the dangerous water back home. They deserve clean water. All the children in Neskantaga deserve clean water.”
Waswa, who lost one of her four children to suicide four years ago, says her youngest child discovered her sister had committed suicide in a closet after going to get water at the water treatment facility with Waswa and another sibling.

“I lost a life when I was getting water (because) we were running out of water that day,” Waswa says. “We needed drinking water on that day, Jan. 9, and I went out to get water on that cold day with my two youngest children. We were walking to the waterfront to get clean water to make juice for them and my girl wanted to bake that day. Today they ask me what if the tap water was working, we would still have our sister with us.”

Waswa says she goes through that every day, even in Thunder Bay.

“I don’t know what answers to give them anymore,” Waswa says. “The water crisis reminds me every day how I lost my child and will never see her again. We need clean water.”

The two sit-in protesters travelled to Toronto to demand better treatment for their children, grandchildren, families and community. They are looking for a commitment from Ontario to assist Neskantaga in accessing the basic human right to clean water, while also addressing the mental health issues which stem from over 25 years of living without clean water.

The other Matawa communities also offered their support to Neskantaga over the longstanding lack of clean drinking water.

“Each of our remote communities experience water system defaults,” says Webequie Chief Cornelius Wabasse. “Whenever that happens, there is outcry from the community so we react to whatever costs are required which puts us in
deep deficit because funding is not available and Indigenous Services Canada tells us to use whatever funding we have but we jeopardize our regular programming. It costs so much to bring in an experienced worker in our community including charters, equipment and labour. Our water and sewer systems are getting to be outdated because when something breaks, they tell us it’s not manufactured anymore so it has to be special ordered which takes time and money. Our facilities need to be upgraded.”

Grand Chief Alvin Fiddler also issued a statement about his support for the Neskantaga sit-in.

“It is simply unacceptable that Neskantaga First Nation (citizens) were forced to evacuate 16 days ago, during a pandemic, because they do not have access to running water,” Fiddler says. “Canada is known as one of the greatest countries in the world to live in, but the people of Neskantaga are being denied the basic human right of access to clean water. Treaty No. 9 and Treaty No. 5 represent the Nation-to-Nation relationship between the people of Nishnawbe Aski and the crown. We fully support Chief Moonias, and we look to the governments of Ontario and Canada to honour the treaties and provide the necessities of life to the people of Neskantaga.”