CANADIAN RANGERS MOVE IN TO ASSIST IN WAPEKEKA SUICIDE CRISIS 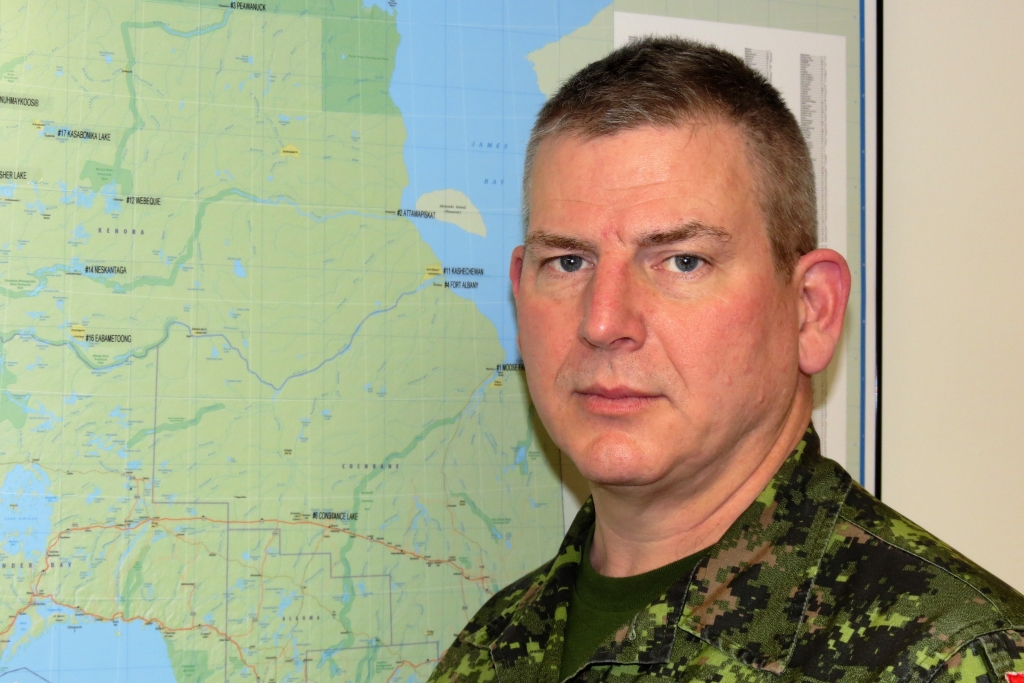 In an unprecedented move, the Canadian Army has sent Canadian Rangers to a small, isolated First Nation in Northern Ontario to provide help in a suicide crisis.

“This is an immediate response to a crisis situation,” said Lieutenant-Colonel Matthew Richardson, commanding officer of the 3rd Canadian Ranger Patrol Group, which commands the Canadian Rangers, who are part-time reservists, in the Far North of Ontario.

“We aren’t counsellors. This isn’t a mental health response,” he said. “We are there as a stop gap for the other government agencies to develop their response to the critical situation. We’re hoping to buy some time so other agencies can get there to help before there is another death.”

Wapekeka First Nation, an Oji-Cree community with a population of about 400 located about 600 kilometres north of Thunder Bay, declared an emergency on June 19 and asked for outside government help in response to the third suicide of a 12-year-old girl this year. In addition, the community has tried to deal with an unprecedented epidemic of attempted youth suicides, including suicide pacts.

During a telephone conference call organized last week by the Ontario Government, Wapekeka Chief Brennan Sainnawap, was told there were a handful of Canadian Rangers from the neighbouring community of Kitchenuhmaykoosib already assisting his troubled community.

“Somebody said you’ve got four to six Rangers there now,” Colonel Richardson said. “He said, “I don’t need four to six. I need 20. He said it in exasperation. He needed help. He was desperate. I told him we’d try to do something.”
The army responded by authorizing Canadian Rangers to fly into Wapekeka to help.

“What we are doing has the support of the Canadian military from the highest on down,” Colonel Richardson said. “To me this is a military operation and we are there to save lives and hold the fort until help from outside agencies arrives. We save lives in forest fire and flood emergencies and in our search and rescue operations in Northern Ontario. In 25 search and rescue operations last year we saved 32 lives.”

There are currently two army warrant officers and 19 Canadian Rangers in Wapekeka. They are conducting suicide prevention patrols and organizing activities to engage the community’s youth. The Rangers, who are all Indigenous, are from Kitchenuhmaykoosib, Muskrat Dam, North Caribou Lake, Sandy Lake, and two of them live in Wapekeka.

“The Rangers are in uniform and are not acting as police,” Colonel Richardson said. “They are not demonstrating authority, they are acting as approachable community members, mentors, and friends who can go and talk to the kids. They’re going to areas where the kids congregate and to the places where a suicide might occur, just to make sure there’s nobody in the act.”

One of the Rangers in Wapekeka is Ranger Pauline Greene, who is a band councillor in her home community of Sachigo Lake First Nation. “I lost my 18-year-old son to suicide 15 years ago,” she said. “When someone commits suicide in one of our small communities the whole community is traumatized. This community is like one whole family. And this suicide crisis has traumatized everyone in Wapekeka.

“They know the Rangers are here to help them, to do what we can for them. We’re the Band Aid until someone comes in to help.”

“Dan and I looked at each other aid said what have we got ourselves into,” Warrant Officer Borton said. “We have been going non-stop ever since. There’s not enough words in the dictionary to describe what we’re been feeling and going through.

“I spent eight months in Iraq with the United Nations and I saw some pretty awful stuff over there. But I never expected to see this kind of situation in my own country.

“I don’t understand the mind set of the kids who want to commit suicides. We find suicide ropes hanging from trees on our patrols and we take them down. We’ve found situations in which we’ve had to ask the police to come and help kids who seemed to be preparing to commit suicides. It’s hard on all of us and hard on the Rangers. It affects you.”

Nishnawbe Aski Nation represents 49 First Nations across the Far North of Ontario, including Wapekeka. In a prepared statement, NAN said: “We are grateful for the assistance of the Canadian Rangers, who have mobilized to assist with the suicide crisis in Wapekeka. This response is unprecedented, and we are certain the Rangers’ presence will bring a sense of great comfort and security to the community.”

According to NAN there have been 523 reported suicides in its 49 First Nations, with a total population of about 45,000, since 1986. The highest number of suicides were completed by children aged 10 to 14 with more than 70 deaths, and youth aged 15 to 20 accounted for nearly 200 deaths. Suicide is the leading cause of death in NAN for children aged 10 to 14.

So far this year there have been 14 reported suicides in NAN communities. Six of them were children aged 10 to 14.

(Sergeant Peter Moon is the public affairs ranger for the 3rd Canadian Ranger Patrol Group at Canadian Forces Base Borden .)