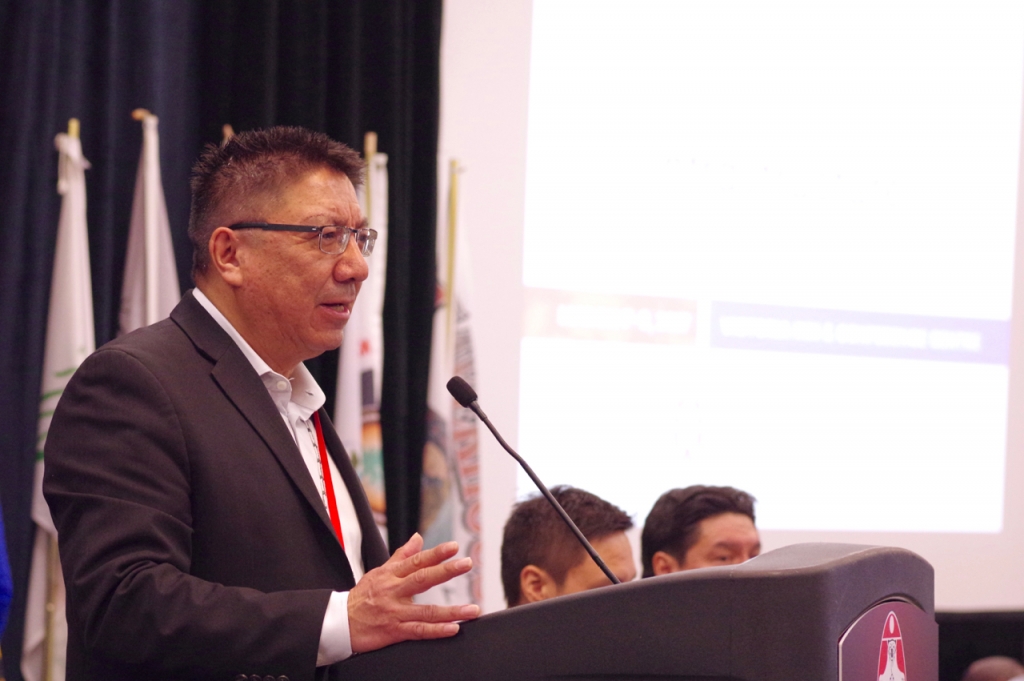 Grand Chief Alvin Fiddler speaks about infrastructure needs across Nishnawbe Aski Nation, including the possibility of building an all-season road network, at the start of the NAN Infrastructure Summit, held March 7-8 at the Victoria Inn in Thunder Bay.

All-season roads were raised during the Nishnawbe Aski Nation Infrastructure Summit, held March 7-8 at the Victoria Inn in Thunder Bay.

“We all know that based on what we are seeing, based on what we have experienced over the last couple of years that we cannot continue to rely on the winter road system,” says Grand Chief Alvin Fiddler. “It’s getting too unpredictable; it’s becoming too short, the winter road season, and it’s becoming unsafe. So we need to look at alternatives, we need to look at other ways of transporting our goods in the long term and that may mean building an all-season road network right throughout the NAN territory.”

Weagamow has already started work on the construction of an all-season road to their community, which is located about 45 kilometres from the Windigo Road.

“Last summer was the first time they were able to drive in and out all year around, but they had to park their vehicles across the lake from the community,” Fiddler says. “But the work to construct an all-season road around the lake is now starting.”

Fiddler says the Weagamow road is potentially part of one corridor to some of the NAN communities in that area.

“North of Red Lake is another potential corridor and the other one would be along the (James Bay) coast,” Fiddler says. “And also in the Matawa territory, that is also something that is ongoing. So I think the movement towards building all-season roads in the north is well underway.”

Webequie Chief Cornelius Wabasse says his community is the lead community for the study into the development an east-west all-season road in the Matawa area.

“We’re hoping to continue to work on that and finalize it and present it to the other groups as well for their review,” Wabasse says during the 2017 Winter Chiefs Assembly. “It follows the current winter road, but we also looked at realigning some portions of the road so that it will be more feasible for transportation.”

Wabasse says the community is looking at what kind of impacts will happen with the development of an all-season road.

“It is a real concern, but I think in some ways they want the all-weather road to come in,” Wabasse says. “They see some benefit to it as well for their community.”

Windigo First Nations Council executive director Frank McKay says the Windigo communities have been looking at the construction of an all-season road due to the unreliability of the winter road system.

“We developed a five-year plan in relation to how the construction planning is going to be undertaken,” McKay says during the 2017 Winter Chiefs Assembly. “We have to go through regulatory environmental assessment routing and consultation with the First Nations in relation to the planning of the all-season roads. We’ve had the approval of First Nations through a survey that was done by Windigo First Nations Council about nine years ago in which the people of the communities supported the development of all-season roads, the grid line extension and also run-of-the-river projects in our territories and also to improve the current winter road system.”

McKay says the current winter roads need to be looked at to determine if they can be used for all-season roads.

“If there’s too much swamp and river crossings, we might have to divert from those winter roads to higher ground,” McKay says. “And we have to consult with the trappers, the users, the harvesters of the land that will be impacted.”

McKay says Windigo has received initial funding to conduct a routing analysis from Windigo Lake to North Caribou Lake to Muskrat Dam to Sachigo Lake and to Bearskin Lake.