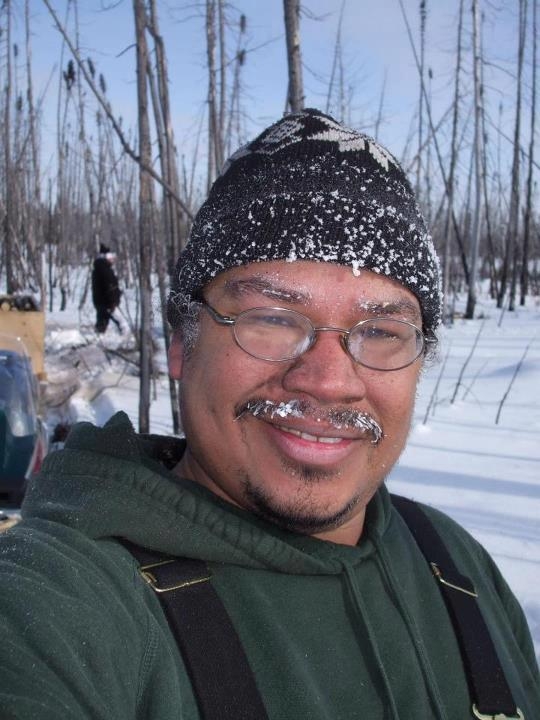 Shawn Beauvais was stranded in the middle of the night in a windchill of about –40C, only 11 kilometres from his home in Peawanuck.
He was wet, cold, dehydrated and hungry as he huddled next to a small fire behind the shelter of a snow wall he had built on a river bank. His snowmobile and sled, with its load of firewood, were in the middle of the small river, where, despite the cold, he had bogged down in slush and soaked his boots and trousers before reaching shore.
He could not go back to his snowmoble or sled without getting soaked again. They were in deep slush and water.
His only source of firewood were some small trees he could knock down on the bank of the river, “like a bear,” by banging his body into them until they fell over.
He was struggling to keep awake when he heard a strange sound. At first he thought it was wolves and he worried that his only protection was a plastic shovel. But then he saw the lights of the approaching snowmobiles. They were the lights of the machines driven by members of the Canadian Ranger and Weenusk First Nation Search and Rescue parties.
What did he think? “Oh, I was so relieved,” he said. “I guess my community’s proud and stubborn and wants to look after us. We have the Rangers and the Search and Rescue. I didn’t know what time it was. I didn’t know how long I had had struggled to knock down trees and keep my fire going. So once I saw those snowmobile lights I knew I could let go. Somebody else was going to take care of me.”
His rescuers warmed him and quickly transported him to the nursing station in Peawanuck, his body cramping along the way with early signs of hypothermia. He had only minor frostbite to his hands and feet.
A heavy equipment operator with the First Nation, Beauvais went out on the Saturday to collect firewood but encountered slush on the river. He was able to get his snowmobile out of the slush but not his sled. He returned to Peawanuck for dry clothing and went back to try and recover the sled, only to get his snowmobile stuck in the slush and frigid water. He got to the river bank and got a small fire going to try and dry his wet clothing and keep warm.
His axe, rope, and spare fuel were in the stranded sled.
He reasoned that if he could stay alive someone would start asking questions when he did not turn up for work on Monday and a search would be started for him.
As it happened, neighbours noticed on Saturday evening that his house was empty and his snowmobile was missing. The Rangers and community searchers left in small groups at 11.45 pm to look for him and found him just over two hours later.
Lessons learned? “In future I will tell somebody where I am going,” he said. “That was a mistake. I guess I was over confident. I will carry more rope in future and probably have someone with me, and an extra axe, maybe, and a radio of some kind to call for help.”
“I think we got to him just in time,” said Ranger Sergeant Matthew Gull. “When we got to him he was very cold and running out of wood. His feet were very cold. He was wearing only a single pair of sports socks. I think it was a good community response.”
Rangers who took part in the rescue were Sergeant Gull, Master Corporals Pamela Chookomoolin and Delores Gull, and Ranger Maurice Mack. The Weenusk First Nation rescuers were Jimmy Chapman, Peter Hunter, Gabriel Koostachin, and Mike Wabano.
(Sergeant Peter Moon is the public affairs ranger for 3rd Canadian Ranger Patrol
Group at Canadian Forces Base Borden.)