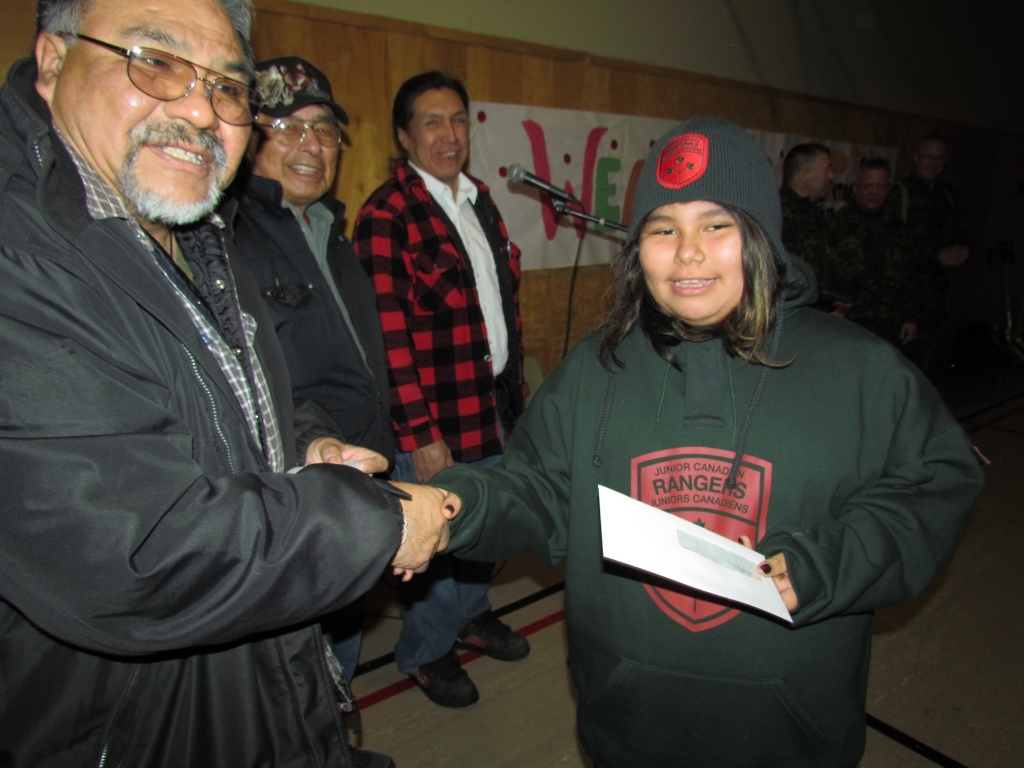 Parents, relatives, friends and community members filled the Sena School gymnasium in North Caribou Lake for a ceremony marking the opening of the community’s new Junior Canadian Ranger patrol.
“This is an awesome moment for our community,” said Councillor Swanson Kenequanash. “It is going to help our youth to keep out of trouble. It will teach them the traditional uses of the land and how to look after themselves.
“They are going to train with an older group, our Canadian Rangers. That’s going to be a really good thing for the community.”
The opening of the patrol in North Caribou Lake brings the number of Junior Rangers to 750 in 20 communities across northern Ontario. Across Canada there are 3,450 Junior Rangers in 126 remote and isolated communities.
The program emphasizes safety on the land and water and in personal lifestyles for youth aged 12 to 18.
Lieutenant-Colonel Morley Armstrong, commanding officer of the Canadian Rangers in northern Ontario, welcomed the 35 new Junior Rangers and said the patrol’s opening was “a great day” for northern Ontario. He urged the new Junior Rangers to have fun while they took part in their training.
“I’m hoping to have a lot of fun,” said Junior Ranger Myles Halfaday, 12. “It’s been a lot of fun so far. We’ve already been snowmobiling, setting traps, and got our new uniforms. A lot of my friends have joined. Yeah, it’s going to be fun.”
All the new Junior Rangers received a surprise gift of $50 at the opening ceremony. “That shows the appreciation of chief and council,” said Councillor Kenequanash. “We are showing our gratitude to them for what they have completed during their first days of training and lets them know that we believe in them.”
Master Corporal Ivan Wapenisk was appointed the Canadian Ranger in charge of the new Junior Ranger patrol. “I’m looking forward to working with them,” he said. “I believe it will be good for them and for our community. To be involved in a program like this will do something good for them on the inside. This will be our biggest youth program.”
Captain Caryl Fletcher, officer commanding Junior Rangers in northern Ontario, said the community response was impressive. “I was surprised and happy at seeing so many people turn out,” he said. “The gym was full, five members of the band council turned up, and a lot of Canadian Rangers were there, too. It’s a great start.”
Rangers and Junior Rangers worked together to prepare the food for the feast that followed the inaugural ceremony.
The Junior Rangers’ first four days of training included snaring, snowshoeing, snowmobiling, building improvised emergency shelters, and different methods of outdoor cooking.
The uniform issued to each Junior Ranger included a distinctive green Junior Ranger sweatshirt, parka, pants, t-shirts, hat, and gloves.
(Sergeant Peter Moon is the public affairs ranger for 3rd Canadian Ranger Patrol Group at Canadian Forces Base Borden.)