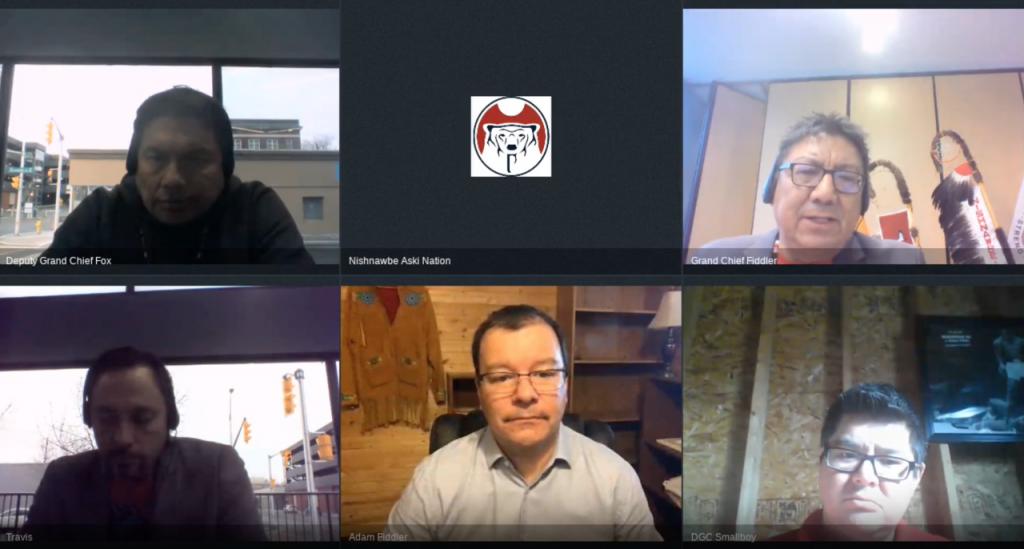 The lobster fishery in Nova Scotia, the evacuation of Neskantaga and the racist treatment of an Atikamekw Nation citizen in a Quebec hospital were highlighted at the Nishnawbe Aski Nation Chiefs Virtual Fall Assembly.

Grand Chief Alvin Fiddler stressed the importance of having Sipekne’katik Chief Michael Sack in virtual attendance to speak about the lobster issue in his community on the first day of the assembly. Sipekne’katik fishers have been threatened and some of their equipment has been damaged or destroyed since they began a moderate livelihood fishery outside the lobster fishing season. Sack was physically attacked and angry mobs also attacked two lobster pounds holding the Sipekne’katik fishers’ catch, and one of the lobster pounds was later burned to the ground.

“That was a very moving moment for many of us because we’ve seen on TV the struggle they’ve had to endure over the last couple of weeks,” Fiddler says during his closing comments on the second day of the assembly. “One of the things that struck me about their message was that they are tired and that they are looking for help, so that is something we’ve tried to do over the last day and a half is to see what else we can do to support them. They did send out a message yesterday evening telling us about an account they have set up and we’ve made a donation to that account because they need to support their (citizens) that have suffered damage to their equipment or the loss of their equipment.”

Fiddler also stressed the importance of Neskantaga Chief Chris Moonias’ presentation on the evacuation of his community due to the discovery of hydrocarbons in the water reservoir system on the first day of the assembly.

“He had to make a very difficult decision after finding out what was going on in his community, the fact that there was absolutely no access to water at all and there was a complete shutdown of their (water) system, that he made the decision to evacuate the elderly and those that would be considered vulnerable,” Fiddler says. “So we are calling on Canada to support that decision.”

National Chief Perry Bellegarde also raised the lobster issue as well as issues with the protection of moose populations in northern Quebec and racism in the health care system during his presentation on the second day of the assembly.

“All of these things you see happening on a daily basis, things happening in the media, we’ve had to deal with them at the Assembly of First Nations and making sure we are involved in bringing about change because the fundamental thing that is becoming quite obvious in Canada is that there is a total lack of recognition about treaty implementation, treaty interpretation, rights recognition,” Bellegarde says. “We have to keep pushing because the line I use is we’re First Nations people being treated like second class citizens living in third world conditions in our own homelands. So we have to keep pushing the crown to honour the spirit and intent of the treaty relationship we have so our people too can benefit from the land we are sharing and the resources we are sharing with our non-Indigenous brothers and sisters.”

Bellegarde says the Assembly of First Nations has a lot of work to do, noting that no one can deny there is racism within the health care system. The late Atikamekw Nation citizen Joyce Echaquan made international news after she live-streamed the racist treatment she received after checking herself into a hospital in Quebec, where she died in late September.

“So we’re trying to build upon that system so that Joyce’s death is not in vain,” Ballegarde says. “We want to make sure that no First Nations person across Canada ever experiences the racism and discrimination that she did in that hospital. So we’re working towards this thing called the Joyce’s Principle. We have a lot of work to do going forward to end discrimination and racism in every province and territory — it’s not just in Quebec.”

A video of the second day of the assembly is posted on the NAN Facebook page.